Battle Couple
Birds of a Feather

IkeMarth is the slash ship between Ike and Marth from the Fire Emblem and Super Smash Bros. fandoms.

Ikemarth was practically born from Super Smash Bros Brawl, Where they are featured as the only two Fire Emblem reps: and are fighting alongside eachother in the storymode cutscenes. With their odd yet iconic appearance--It's no denying that they were popularized from this game entry and have been a staple cult classic duo in Smash and the internet ever since.

Ike and Marth hail from different Fire Emblem games & continents, but meet eachother in other game series/universes: like Fire Emblem Heroes, but they are mostly known for being paired in the Smash Bros universe.

While the Ikemarth fandom has now kind of dwindled, they were extremely popular in the late 2000s and 10s and were all over the internet: whether it was a parody or not, and whether it was from the japanese or western side or not. They were embedded in anime/nerd/meme culture (aswell as slash/BL culture): spawning tons of fanart, animation fads, fics, etc--and despite that they're not as prelevant on the internet now, they still get matching merch & appearances till this day and it is possible to pair them up in Fire Emblem Heroes (FEH): romantically or not.

The two are the main blue haired protagonists of their own games, where they both live by the sword, are leaders of a ragtag band, and took over for their fathers business all too sudden and too soon. Even though the differences between them is that Ike is a commoner, in which gives him little regard to nobility, while Marth is born with royalty and heir to his kingdom. While the similarities between them is that both of them experience some sort of personal loss, and would rather not get into fighting, even though the reasons why they fight are different. Marth’s reason is to able to help out and trust others so they can fight with him. Ike’s reason for fighting is because on how he was raised, him being on battlefield lead him to grew more mature earlier on, with him protecting his friends. Along with both of them have passion on anything that kept them to motivate themselves to fight. 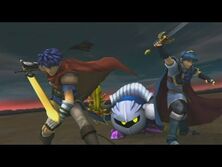 Ike and Marth have met in the Super Smash Bros. Brawl where Marth was standing at a castle looking at the time bomb. He still looked at the time bomb ready to be in his way and then Meta Knight attacked him. They were clashing, until they met in common ground. Marth and Meta Knight tried to stop the Ancient Minister, until a sword appeared and Ike came screaming “Great Aether”, to put the stop to cause an another time bomb.

People were worried that Ike was going to be cut from this entry and be replaced by the Awakening characters, but it turns out he's in and with an entire new look: his Radiant Dawn version. The fans truly rejoiced this moment.

Ike and Marth were known by the Awakening characters as "The Radiant Hero" and "The Hero King". They predominantly are the only lords to be consistently refered to with such mighty titles. This fact carries into SSB4 and FEH.

New Mystery of the Emblem

You can give your Avatar Ike's hairstyle and get a headband for him later in the story. You can even name your character Ike, giving full reign to imagine that he lives in Marth's universe as his royal guard. 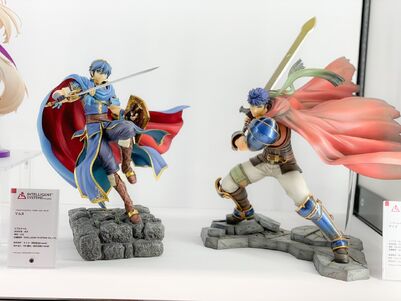 Ikemarth is practically built on fanon. Because of the few interactions from the Super Smash Bros. Brawl, people who like the interaction thought that Ike and Marth are good together. It also doesn't help that they were the only Fire Emblem reps together and that their grungy anime-style stood out from any other Smash Fighters. Many people thought it would be a good pair.

At the time, Fire Emblem was exclusive to japan, so fans didn't really know much about Marth aside from Smash, and had to make up their own portrayal from what info that Smash gave them. They had the Subspace Emmisary storymode cutscenes, Trophy descriptions, screenshots, and the internet fandom to work with. Many saw Marth as a submissive type due to his rather feminine appearance, and Ike being the hero who would save Marth in dangerous situations. Some also saw Marth as a cool high & mighty prince who is either sassy/bossy--or a very happy-go-lucky flamboyant boy, while Ike is either the more laidback yet intimidating jock--who is mostly always seen carrying a huge meatstick for him to eat. Eventually, Marth's games were localized and renewed, and their portrayal slowly became to change within the fandom.

Nowadays, fans enjoy Ikemarth for either nostalgic 2000s internet reasons or just the appeal of a royal x commoner dynamic, and perhaps even a dynamic where Ike is a hire-in mercenary bodyguard for Marth.

Though content is still quite booming on the JP side of the fandom, getting fanart & mangas even till now.

On AO3, the ship only has 84 fanfics. While Fanfiction.net currently has 54 in total, 3 in the Fire Emblem category and 51 among its Super Smash Bros. fanfics. Wattpad also has 3 fanfics of the ship. 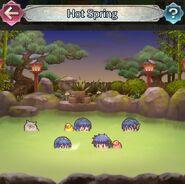 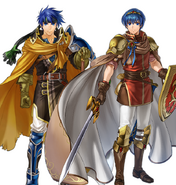 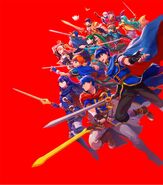 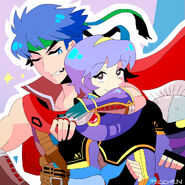 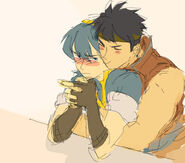 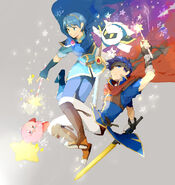 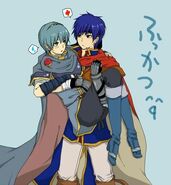