Ikuzono is the femslash ship between Mukuro Ikusaba and Sayaka Maizono from the Danganronpa fandom.

Although they don't interact much on screen together, Mukuro often agrees with Sayaka when the latter is trying to state a point, or vice versa. They also seem to be on a positive note with each other.

In Danganronpa 2.5: Komaeda Nagito to Sekai no Hakaimono, Mukuro can be seen spying on Sayaka and Makoto Naegi from behind a tree. However, this is because of her attraction to Makoto instead, and shows her jealousy of the attention Sayaka is receiving from him. Both characters are implied love interests to Makoto Naegi, with Sayaka having a mutual attraction with him and Mukuro having a one-sided attraction to him.

In Ultimate Talent Development Plan, Mukuro asks Sayaka if she had fallen for her (which Sayaka neither confirms nor denies). Sayaka compliments Mukuro's slim figure and says that she's always thinking about how nice and slim Mukuro's legs are. This interaction ends with Sayaka and Mukuro talking over tea.

In Mukuro's Free Time Events as "Junko," she talks about how she strived for her dream her entire life, which is very similar to what Sayaka spoke about in hers. Both girls have people in their lives who they would do anything for- Sayaka for her bandmates and best friends, and Mukuro for Junko. Both girls had unstable home lives. Sayaka grew up without a mother, and while we don't know exactly how Mukuro and her sister's home lives looked like, we know that they were homeless at some point and can assume that Mukuro was abused by Junko in some form or another.

This ship became more popular after their Ultimate Talent Development Plan moment where they complimented with each other. Most fans of this ship like it due to their UTDP event and popular/cute dynamics they have. Fans of the ship still existed before the release of the UTDP in Danganronpa V3, though they were much rarer due to both girls dying early and not getting much interaction.

Most fan work for this ship takes place in an alternate universe, usually a non-despair or no death game ones. It's a common theme in Ikuzono works for the two girls to be a part of friend groups with Makoto and several other characters, such as Chihiro or Leon. Since these two are considered a "rarepair," lots of the fanfictions for them are chat-logs, although there are quite a lot of one-shots and multi-chapter fics for them as well. 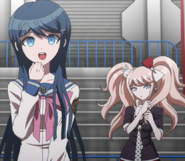 Naegi Harem refers to the ship between the two, Kyoko Kirigiri and Makoto Naegi