Close Friends; both are alive (Pre-Timeskip)
Both are deceased (Post-Timeskip)

InoKana is the het ship between Inosuke Hashibira and Kanao Tsuyuri from the Demon Slayer fandom.

Inosuke and Kanao are both members of the Demon Slayer Corps. They respect each other and eventually become close friends. They both met during the Rehabilitation Training Arc, where one of the tasks was to pour medicine onto Aoi and Kanao. While Inosuke was able to complete the task with Aoi, he couldn't pour the medicine onto Kanao. Inosuke, who hates losing, became depressed and stopped coming to the training.

Inosuke has fairly minimal onscreen interaction with Kanao during their training. Because of his eccentric behavior, Kanao is sometimes disturbed by Inosuke, such as when he dislocates the joints in his arms to make them longer. However, the two later form a bond in their fight against Douma, who was responsible for the deaths of their loved ones. Inosuke saves Kanao from being killed by Douma, and helps her avenge Shinobu. They are a very effective team in combat and they manage to slay one of the strongest demons together.

After the fight they share no dialogue, but they grieve their late family members together. Kanao is seen carrying Inosuke while both of them are still crying. She later spanks him after he kicks Murata. When they return to fight Muzan, they exchange some brief banter, and seem to work well together once again. They survive the battle and return to the Butterfly Mansion along with their other remaining friends.

InoKana is a somewhat popular ship in the Demon Slayer fandom, but gets overlooked due to TanKana and AoIno being canon. The ship gained attention after the fight against Douma. Some fans heavily dislike TanKana and shipped InoKana as an alternative. The similarities in their stories as well as the contrast in their personalities are why they are paired together. They are often portrayed comforting each other after losing Shinobu. 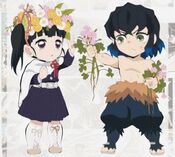 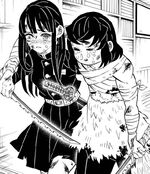 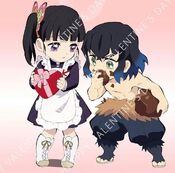 TanKanaIno refers to the ship between the two and Tanjiro Kamado