InoZen is the slash ship between Inosuke Hashibira and Zenitsu Agatsuma from the Demon Slayer fandom.

Inosuke and Zenitsu's initial meeting was rather tense. Inosuke had drawn his sword at Zenitsu, and was close to killing him, as he knew that there was a demon inside the box. Zenitsu claimed that he knew, but Inosuke continued nonetheless to beat him up, until Tanjiro had to stop Inosuke. Upon looking at his face, Zenitsu was greatly shocked. After he was given a concussion by Tanjiro, Zenitsu was willing to take his haori and use it as a blanket for Inosuke. After he wakes up, and they take shelter somewhere else, Inosuke was against the idea of apologizing to Zenitsu, which made him angry. Then, Inosuke apparently forgets about Nezuko, but Zenitsu still wonders why he beat him up, and called him eyelashes, mocking his feminine face.

During the Rehabilitation Training Arc, Zenitsu was initally scared of what was happening, due to Inosuke and Tanjiro coming back with pale faces. Upon arriving at the training spot, Aoi explained what they had needed to do, and what was going to happen. These exercises included getting aggresively massaged by the younger girls of the Butterfly Mansion, to the point where it even made Inosuke cry, and play a game of tag with Aoi and Kanao. There, Zenitsu's head are filled with romantic fantasies, and sees it as a good thing. He then yells and Inosuke and Tanjiro to follow him elsewhere. There, Zenitsu starts shouting at the two, angering the latter. Zenitsu takes no hesitation into punching him, which causes Tanjiro to force Zenitsu to apologize, until he explains the joy to be massaged by them. Inosuke is greatly bewildered by his sayings.

Due to his lack of knowledge, Inosuke is constantly looked down upon by Zenitsu. Even going so far to the point where he is insulted for his stupidity. Zenitsu and Inosuke usually do not get along eventhough being on the same team, this is mainly due to their extremely low opinions of each other and their wildly contrasting personalities, But despite that, these two overcome their dislikes to one another and team up with eachother to slay some powerfull demons, such as Daki who they encounter in the Entertainment District.

Zenitsu and Inosuke's relationship often brings violence; which forces Tanjiro to meditate between the two. For Inosuke being the fact that he sees Zenitsu as annoying, a crybaby, weak and loud; however Zenitsu sees him as a violent moron who's only interested in fighting. Zenitsu is somewhat jealous of Inosuke, due to Nezuko being unusually sweet to Inosuke. After Inosuke's fight with Douma, he regains energy and upon meeting Murata and Zenitsu, Inosuke starts getting violent with them; only to be spanked by Kanao. After the defeat of Muzan and Tanjiro wakes up from his coma, they are both seen sleeping on his bed.

The two are sometimes bemused and irritated by Tanjiro's kind and positive attitude.

InoZen is a rather big ship throughout the fandom, and is one of the most popular slash ship for the two. Despite this, due to the canon ships involving the two; AoIno and ZenNezu, fans mostly concentrate on those two ships. It's still one of the most beloved ships on AO3 and Tumblr.

Agatsuma Z./Hashibira I. tag on AO3 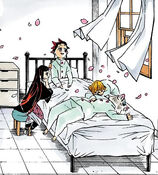