• True Companions
• You Are Not Alone

InoZenTan is the poly ship between Inosuke Hashibira, Zenitsu Agatsuma and Tanjiro Kamado from the Demon Slayer fandom.

Tanjiro, Inosuke and Zenitsu participated in the final selection and were one of the 5 survivors, but Tanjiro and Zenitsu only got to know each other since Inosuke won so fast he left earlier than the other 4 participants. Tanjiro was going to his next mission to a mansion that was being controlled by a demon, and later found Zenitsu in a country road crying for a woman. Tanjiro recognized him and got mad at him for acting like that, and later he decides to take Zenitsu with him to the mission. Inside the mansion they met Inosuke, who was trapped inside the mansion but still had very nice attacking skills. After defeating the demon, Inosuke and Tanjiro had a fight. Tanjiro won after headbutted Inosuke. Inosuke's mask fell off, revealing his face. Tanjiro and Zenitsu got shocked since both guys says he looks like a woman. Later Inosuke fainted, so Tanjiro put his haori under Inosuke's head like a pillow, and Zenitsu put his haori like a blanket to him. Inosuke later wakes up enraged shouting. Since there, the trio go to the missions together.

Inosuke proclaims himself the leader of the team, though he's the only one who can't even pronounce Tanjiro and Zenitsu's names correct. Both Zenitsu and Inosuke knows that Tanjiro's sister, Nezuko, became a demon, and they already are aware of protecting her too, even tho Inosuke tried to killed her at first since he just met Tanjiro that moment.

InoZenTan is somehow popular inside the Demon Slayer fandom, since this trio are the main protagonists of the anime. Something fans really enjoy is their big personality difference: Zenitsu is skittish, lazy, gentleman and crybaby. Inosuke is childlish, brave, rude and competitive. And Tanjiro is kind, determined, responsable and patient. Being said this, fans may see Tanjiro like a mother-figure to both Zenitsu and Inosuke, but thanks for his lack of acknolegde of big cities, Zenitsu takes the roll in ther sometimes.

Even this trio are the main characters, some fans think Zenitsu and Tanjiro (ZenTan) made a closer bond since they met first and Zenitsu is in love with Tanjiro's sister (Nezuko), but other fans think Tanjiro got stronger bonds with Inosuke, (InoTan) since Tanjiro knew he lost her mother and inside he did feel pain. Either way, Tanjiro understand the feelings of both Inosuke and Zenitsu and viceversa, since the three of them know each one of them have lost someone precious in their lives.

Inosuke resting in Tanjiro's haori and covered with Zenitsu's haori 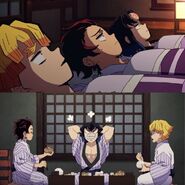 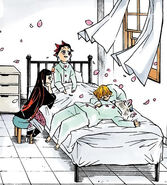