IronStrange is the slash ship between Stephen Strange and Tony Stark from the Marvel Cinematic Universe fandom.

Tony and Pepper are jogging in the park when Strange opened a portal next to them and tells Stark he is needed for superhero business. Despite their multitude of similarities, Stark and Strange are cold to each other at first and insult and despise one another with their arrogant attitudes. Strange and his friend Wong explain Thanos' quest for the six Infinity Stones to Tony and Bruce Banner. This conversation leads to an argument between Tony and Strange, both of them having a different approach on how to defeat Thanos. Tony suggests destroying the Time Stone, but Strange is persistent on his oath to protect the stone.

The conversation is interrupted by Thanos' "donut ship" hovering over New York and the general chaos erupting in the streets. The four are confronted by Ebony Maw who asks for the Time Stone, and after the ensuing battle, captures Strange and tortures him aboard the ship. Strange is subsequently rescued by Stark and Spider-Man (Peter Parker), Maw being killed in the process. In a brief tense moment, Stark and Strange go head to head in arguing what to do now that they were on a huge ship hurtling into space. Although Strange is at first reluctant to confront Thanos to avoid the risk of losing the Time Stone, he eventually agreed to go with Stark.

The ship is hijacked by Guardians of the Galaxy and the whole group lands on Titan, Thanos' homeworld. Stark and the Guardians perform introductions while Strange uses the Time Stone to view all of the possible outcomes of the struggle against Thanos. When he breaks out of his trance, Stark comforts him, saying "it's okay" and "you're back now". Strange reveals that there are 14,000,000 possible outcomes and in only one do the Avengers win.

The group formulates a plan to wrest the Infinity Gauntlet off of Thanos. When the plan fails to come to fruition, Thanos battles and delivers what seems to be a mortal wound to Stark but is soon after healed by his nanotech suit. Thanos threatens to kill Stark if Strange doesn't give up the Time Stone, so to protect Stark's life, Strange hands it over, readying Thanos to retrieve the final stone, the Mind Stone, in Wakanda, and perform the fatal snap. After the Decimation and the dusting of the Guardians, Strange tells Stark that "there was no other way" before being dusted himself.

Five years later, the Avengers successfuly bring everyone who got dusted back. While they are fighting Thanos, Tony asks Strange to tell if this is the time they win. Strange responds by saying that if he tells Tony what happens, then it won't happen. Later, after Thanos seizes the infinity gauntlet from Captain Marvel, Tony stares at Strange who simply raises one finger. Tony then nods, making one last attack on Thanos before managing to snatch the infinity stones. He snaps his finger, trading his life for Thanos' defeat.

Tony – “Who just saved your magical ass? Me.”
Strange – “I seriously don’t know how you fit your head into that helmet.”
Tony – “Admit it. You should have ducked out when I told you to. I tried to bench you. You refused.”
Strange – “Unlike everyone else in your life, I don’t work for you.”
Tony – “And due to that fact, we’re now in a flying doughnut billions of miles away from Earth with no backup.”
— Avengers: Infinity War

Within two weeks of the Infinity War premiere, IronStrange had entered at no. 5 on the Tumblr Top 20 weekly ships list.[1] Fans like the ship due to the nature of both characters, geniuses who are somewhat arrogant. Their similarities, instead of bonded them together, caused them to clash at first, due to them having different approach to several things and ironically disliking each other's arrogance. Nonetheless, the arguments between them made them even more interesting to the fans instead, labelling them as 'a powerful duo'.

The two started by disliking each other but ended up earning each other's respect. Tony, at first, was constantly showing disregard toward Strange, much to Strange's irritation. This included him leaning on the Cauldron of the Cosmos, dismissing Strange's job as 'making balloon animals', and named Strange 'wizard'. He eventually began to show respect due to their shared purpose, with him asking Strange about his condition to ensure he's alright a few times, also trusting Strange's words wholeheartedly. Strange at first seemed to be very cold and unhesitant when mentioning Tony's possible death in order to protect the Time Stone, however in the end he too mourned his sacrifice. It was also very likely that Strange started to respect Tony when he learned that Tony would be the key to defeating Thanos, even more after it came to reality, he knelt and bowed following Tony's sacrifice. Strange was also present at Tony's funeral.

Some fanworks include Tony and Strange helping each other deal with their traumatic experiences and the burden to save the world. Following the release of ''Spider-Man: Homecoming'', the fanworks have also included them parenting Peter Parker as their child. 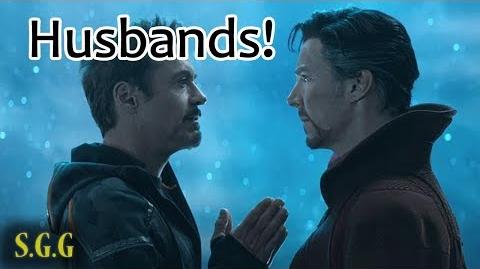