Iron Dad is the familyship between Tony Stark and Peter Parker from the Marvel Cinematic Universe fandom.

Although Tony doesn't realize, they have already met during the Stark Expo in 2010. Peter visited the Stark Expo and acquired toy replicas of the Iron Man helmet and glove, including Tony Stark's autograph. During his second visit, Hammer Drones began attacking the expo, sent by Ivan Vanko, prompting Iron Man to fight them. One drone landed in front of a fearless Peter, who held his hand up in defiance. Iron Man arrived just in the nick of time and destroyed the drone, thanking Peter for his help before flying off to continue the battle, leaving Peter completely awestruck.

In 2016, the talent of the Spiderling caught Tony's attention. Tony made a suit for him too keep him safe and asked for his help against Captain America. Towards the end of the fight with Team Captain Peter fell down and lost his consciousness. After the battle Tony checked on him and when he noticed Peter got hurt, he sent the teen home.

After the Civil War, Tony took Peter home and gave him the Spider-Man suit before hugging him. Peter thought that Tony didn't listen to him and care about him. However Tony always kept an eye on him and several times saved him. He listened to his voicemails and put a tracker in his suit to always know where Peter is. Despite all these Peter is a stubborn teenager, who wanted to prove himself so he didn't obey to Tony. Not surprisingly he screwed it up so Tony took away his suit. Without his suit he defeated the Vulture and made Tony proud. Tony offered him a place between the Avengers and the chance to live with him, but Peter refused it. At the end of the movie they said goodbye to each other, and Peter said they would see each other around.

One year after Homecoming their relationship became much stronger. We can assume that they stayed in contact since Homecoming. Peter saved Tony in the battle of New York, then despite his best effort to rescue Dr. Strange, he was unable to retrieve him and was subsequently pulled toward the alien warship. He nearly suffocated as the ship left Earth's atmosphere but was promptly rescued by the intervention of Iron Man who summoned the Iron Spider Suit.

Despite Tony's orders to return home, he stubbornly remained on board and infiltrated the ship. After Tony found out that Peter stayed on the Ship they had a little argument, because Tony was worried about Peter. After that Peter helped Tony to save Dr. Strange, and Tony officially made Peter a member of the Avengers, making him happy. However Thanos succeeded. They watched as their allies began fading and disappearing one by one, until Peter realized that he himself was also beginning to fade.

He terrified and tearfully clutched onto Tony, as he insisted that he did not want to die. Tony stayed by him till the end and attempted to comfort his scared mentee. As Peter collapsed, he muttered a final apology to Tony for failing him before he disintegrated into nothingness.

After the unimaginable Tony sat down with his hand covered with Peter's ashes pressed against his mouth. He rocked back and forth while a teardrop streamed down his face.

It's a familyship, but that doesn't mean in every case that Tony is Peter's dad. Mostly in the fandom they just have a father-son relationship, but they aren't relatives. Although fanfictions where Tony adopts and raises Peter are popular.

Some fans noticed that Tony putted many features in Peter's suit based on his experience. For-instance, he putted a chute in Peter suit because Rhodey had fallen, he also put a heater because he had been cold when JARVIS had sent him away. This might show how Tony cared for Peter's safety and served as a father figure to him.

Many fans think it is very sad that Tony had missed Peter for five years and successfully brought him back, but didn't even get to see Peter grow up. It is also saddening that Peter once again lost his father figure. 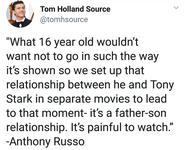