Former companions, Enemies;
Both are dead

Irouma is the het ship between Miu Iruma and Kokichi Ouma from the Danganronpa fandom.

Miu feels irritated by Kokichi and believes that he is the mastermind. She insults him by calling him a shota and a compulsive liar (in the English version, she goes even further by calling him "lying little abortion"). Kokichi, in turn, is shown to be very mean-spirited and nasty towards Miu, often calling her by derogatory terms like a whore and a bitch, and saying that she's things like ugly, smelly and useless. He also often insults her and calls her a pervert due to her sexual nature. Kokichi's treatment of Miu seems much harsher than with anyone else as he quite often appears more serious while insulting her, though being a masochist Miu often just enjoys the insults. The two are seen insulting each other multiple times during the trials, with Kokichi winning these debates due to his stronger personality and Miu's cowardly tendency when talked back.

In Chapter 2, Kokichi witnessed Miu in the dark, walking around in her underwear in the courtyard, as a tactic to escape Gonta. During the investigation, Kokichi tells the others about the situation and how strange it was, with him appearing visibly disappointed. He later mocks her during the trial for being perverted.

In Chapter 4, Miu tried to ask everyone to enter the virtual world and ordered them to bow to her, but Kokichi told her that she should be the one bowing since she is asking something from them. Unlike in many earlier situations, Miu seems very uncomfortable by this and appears very down after obeying Kokichi's command. In the virtual world, Miu attempted to murder Kokichi and placed a bottle of poison on his chair to make it look like he got poisoned. However, Kokichi lured Gonta into killing Miu by strangling her with a roll of toilet paper. Later when Gonta was found as a culprit, Kokichi told Monokuma to execute him as well which could imply he felt guilt, but he appeared to mostly feel bad for Gonta instead of Miu.

In chapter 5, it's revealed that Kokichi talked with Miu before the fourth murder happened and asked her to make various inventions to fight against Monokuma. While Miu agreed to create the inventions, she explained that she wouldn't cooperate with the others because she believed there would inevitably be a betrayal. Kokichi listened to her words seriously and later appeared to feel genuinely bad for her when he told the others about the conversation. Despite her murder attempt, Miu claims to have no particular ill-intent against Kokichi. 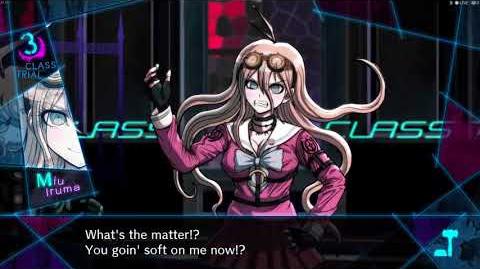 Retrieved from "https://shipping.fandom.com/wiki/Irouma?oldid=196190"
Community content is available under CC-BY-SA unless otherwise noted.