IruAzz is the slash ship between Iruma Suzuki and Asmodeus Alice from the Welcome to Demon School! Iruma-kun fandom.

Asmodeus first took note of Iruma when the human unwillingly stole his introductory speech on the first day of school. He formally challenged Iruma to a duel and attacked him with his powerful fire magic as the other frantically tried to apologize and explain himself. Through his superhuman evasion capabilities and sheer dumb luck, Iruma unintentionally defeated Asmodeus while trying to save a bystanding student from a stray attack. Since his defeat, Asmodeus pledges his unyielding loyalty and respect to Iruma.

Asmodeus quickly becomes attached to Iruma by the hip, standing up for his mild-mannered "master" and vowing to help him acheive any and all goals he wishes to pursue. Iruma, on the other hand, explains to Asmodeus that he'd rather the demon be his friend rather than his servant. This is the first time Azz has heard the term, as it is not a common custom in the demon realm, but he is quick to embrace his status as Iruma's friend, understanding it as "spending time together, sharing each other's pleasure and pain, and willing to form a blood pact of their willingness to die for one another."

While Iruma is not naturally inclined to pursue power and status as customary for demons, Asmodeus is fairly respectful of this decision and still supports him. Though, when he decides to work toward raising his rank, Azz is still overjoyed by his newfound ambition and does his best to help him raise it. He even scolds himself for initially believing Iruma had no interest in raising his rank, meaning that he knew Iruma had no ambition at first, but still admired him anyway. And, while it takes essentially the entire game of Execution Cannonball in thought, he also respects Iruma enough to look past his more fragile state and give his all against him in the final round of the match to ensure his efforts don't go to waste.

While Azz is prone to going overkill at any given moment, jeopardizing Iruma's attempts to avoid standing out, the human still earnestly enjoys being friends with him. He is willing to rely on Azz's help when he needs it, though still tries to reign the demon in from acting overly servile. Asmodeus is one of Iruma's first genuine friends and, like with most others, Iruma actively acknowledges and cares for his wellbeing.

While not explicitly confirmed, the series seems to hint Asmodeus possibly having romantic feelings for Iruma on multiple occasions. He often tends to blush in response to Iruma's statements or feats. He often dismisses the advances of the numerous female students with crushes on him, especially when Iruma is affected by their actions, actively telling them off in such cases. During one of the Sukima segments, he bonds with Eiko Oni (who canonically has a crush on Iruma) when he finds her trying to take a picture of Iruma while he's eating, stating that she has a good eye and amicably chatting about him with her. When Iruma spots them conversing, he even notes that it's a rare occasion for Asmodeus to be talking with a girl. In episode eight of the anime, he hardly sleeps for an entire night from trying to figure out what Iruma is thinking. He has also stated that Iruma "is always the most valuable in my heart! You absolutely slay me!" But, arguably, the most poignant evidence is when Asmodeus's mother runs into them at the Battler Party and meets Iruma. She states that he's all her son ever talks about and asks about the fireworks he made, seemingly certain they were a form of seduction magic. Asmodeus promptly responds by acting flustered and leading her as far away from Iruma as demonly possible.

The ship sailed as a result of Asmodeus's admiration of Iruma and their strong friendship/mutual respect, as well as the several instances in which Asmodeus's somewhat obsessive behavior tends to hint at a beyond-platonic interest in Iruma.

Fans would compare this ship with the Transgender flag due to their hair colors (Iruma= Blue/ Asmodeus= Pink/ Transgender Flag= Blue with Pink). They also tend to discuss if Asmodeus is Bottom or Top. This is because his bashful behavior around Iruma and he tends to blush a lot when he's with him.

On AO3, IruAzz is the most-written ship for both Iruma and Asmodeus. It is also the most written in the Welcome to Demon School! Iruma-kun tag.

Shax – “It may be his wicked phase, but Iruma-kun is the same as ever (he can't refuse to anyone)”
Alice – “(nodding) That's just more of Iruma-sama's charm!”
— Alice's comment about Iru-mean on Chapter 57

Iruma – “I'm sorry...”
Alice – “No! Even your wicked phase was sublime! But the normal Iruma-sama is truly the best!”
— Iruma apologizing to his friends on Chapter 60

Jazz – “And Azu-kun?”
Alice – “As Iruma-sama's aide-de-camp, i shall cleave to his side and restrain him at the first sign of a change!”
Jazz – “He's pretty restrained now”
— Chapter 61

“What a strange man... He posseses a strength that overcomes any hardship, and yet is ignorant of how the world works... his kindness is rare amongst us demons... but that's also the reason his compassion fills your heart. And back then, when [Iruma] mounted the Demon King's throne... what i saw was the future.”
— Alice description about Iruma on chapter 61

Alice – “As expected of Iruma-sama!!!”
Iruma – “Huh!?”
Alice – “To be truthful, i... used to think that those people who easily lose motivation wouldn't get any better than a bad grade. Everyone was affected by Iruma-sama's studying spirit, and then all picked up their pens to study after that. You have the talent to change the people around you. (And that is also a quality of a true king!)”
— Alice's opinion about Iruma helping others on chapter 66

Kalego – “Anyways, are you still talking to your guardians about things at school lately?”
Alice – “Lately, Iruma-sama have always been splendid.”
Kalego – “Who asked you about how's Iruma doing?”
Alice – “My talk... was about Iruma-sama's story”
Kalego – “What kind of reasoning is that!? Focus on your own business!!”
— Alice and Kalego on chapter 68

Sabnock – “Didn't you hear? [Iruma] said he's irritated”
Alice – “I will never forgive myself for not understanding how he felt... As you wish, Iruma-sama. I have to be by his side at once”
— Alice and the others agreeing on going with Iruma on chapter 77

Viole – “Alice nii-sama! Don't we [Viole and Lily] look lovely!?”
Alice – “Both of you have become fine ladies”
Viole – “Right!? Even cuter than Iruma-sama, i bet!”
Alice – “Iruma-sama looks good in a dress too (he's cute)”
Viole – “You're kidding me, right?!”
— Asmodeous chat with his sisters

“My chest... feels hot, like it's on fire...! What was i so afraid of? Or feeling down after being told that i know nothing... thinking "i have to protect [Iruma]." No matter who tries to crush his spirit, or who better understand his journey, no other demon is lucky as i am for i am the closest to Iruma-sama, and i can watch him carve his path to stand on top of netherworld! I won't waver anymore. So that i may see his rise...”
— Alice's feelings on chapter 177

“I thank you for being born into this world, and living alongside us. I am grateful.”
— Alice to Iruma in chapter 183. 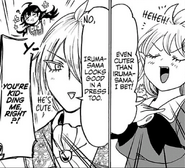 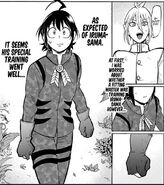 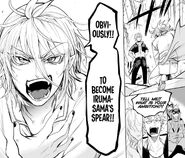 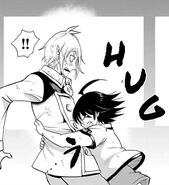 Add a photo to this gallery
Retrieved from "https://shipping.fandom.com/wiki/IruAzz?oldid=262917"
Community content is available under CC-BY-SA unless otherwise noted.