Ishiceles is the het ship between Kiyotaka Ishimaru and Celestia Ludenberg from the Danganronpa fandom.

During the Killing Game, Celestia had a plan to manipulate Hifumi Yamada into killing Kiyotaka, since she was tired of the both of them fighting over Alter Ego. She noticed their negative feelings towards each other and decided to use them to her advantage. Celestia lied to Hifumi by telling him that Kiyotaka had stolen Alter Ego, and that he had abused and threatened her. These shocking accusations show that Celestia didn’t care for Kiyotaka at all and had no friendship with him, as she easily manipulated Hifumi into killing him and showed no remorse for his death. She put her own dreams above his own life, showing that he didn’t have any impact on her as a person in any sort of way.

In the Ultimate Talent Development Plan, however, they seem to be good friends. They share three events together, one of which being when Monomi happens to leave something in the classroom and witnesses Kiyotaka and Celestia playing a game. When Monomi asks what game they are playing, Kiyotaka says it is called shogi. Celestia claims that she doesn't know the rules, which shocks Monomi completely, due to Celestia's gambler status. Monomi asks her if it's fun to play a game you don't know much about, to which Celestia responds that it's fun to win. Celestia tells her that Kiyotaka wished to challenge her to a game, so to even the odds, she chose shogi. Monomi quickly becomes concerned and asks them if they are betting money. Kiyotaka tells Monomi that he would never gamble due to "public morals." Celestia then confirms this by telling her that she simply told Kiyotaka to get her some snacks from the dining hall for her tea when she wins. Kiyotaka claims that if he wins, he wouldn't ask Celestia for a reward. Kiyotaka soon grows upset at the fact that he's lost 10 out of 10 matches, but says that he'll keep going because he wants to win against a talented person through effort and hard work. He claims that he'll beat her eventually.

Their second event together was during their last winter at the academy. Kiyotaka decides to challenge Celestia to a game of shogi once again. After losing quite a few times, he finally manages to get a draw. Both are shocked and have no words, though Celestia breaks the silence eventually by saying that luck comes in waves. She then compares the draw to a computer glitch appearing only once out of ten thousand times. She says that if he was as lucky as her, then victory wouldn’t be shaken so easily and that today might just be his lucky day. Kiyotaka tells her that he has been practicing and working hard to beat her, but she replies by telling him that winning is only his fantasy. Kiyotaka says that one day, in the future, he will beat her completely. Celestia informs him that their time at the academy is slowly coming to an end, and that if he still wants to challenge her they can go to an underground gambling hall. Kiyotaka tells her that he has no knowledge of underground gambling, and Celestia tells him that this is exactly why they have to settle their matches by the time they graduate. Kiyotaka refuses and tells her that he’ll build a place where society rewards valiant effort, and when he does that, he will have truly won.

Their last interaction is during the summer sports festival, when Kiyotaka catches Celestia betting with some students. Kiyotaka angrily asks her what she is doing. Celestia innocently asks him why he's so upset with her. Kiyotaka tells her that he is mad at her because she's placing bets on everyone while they're working hard. Celestia tells him that she is a gambler, so this is her way of honing her talent and performing her best. After a while, it seems that Kiyotaka comes to respect Celestia's reasoning.

Ishimaru – “There's no way I would stand for something that would ruin public morals like gambling!”
Celestia – “I am simply having Taka retrieve some snacks from the dining hall for my teatime. Since I am giving him my precious time, this is a necessary exchange...nothing more.”
Ishimaru – “Yeah, that's it! And if I win, I have no intention of asking anything from Celeste!”
Celestia – “My teatime every day has been complete and I have not even needed to move.”
— Celestia and Ishimaru explaining the rules

Celestia – “Kiyotaka? Why are you so angry?”
Ishimaru – “I am furious with you right now! You're placing bets on everyone while they're working so hard... Such indignity!”
Celestia – “I am a gambler. This is what I do. It is my way of honing my talent. It is my way of performing my best.”
Ishimaru – “Gah! A-Are you serious?”
— Celestia telling Ishimaru that gambling is her way of performing the best

Ishimaru – “...”
Celestia – “...”
Ishimaru – “...A draw? Until this match...I've only managed to lose pathetically against Celeste...”
Celestia – “Luck comes in waves...If you continue to challenge me, it's possible you'll have a draw with me at least once. For example...like a computer glitch appearing only once out of ten thousand times.”
Ishimaru – “No, that's not it...”
— Ishimaru finally drawing with Celestia

Ishimaru – “No... Not yet. It's not over yet!”
Celestia – “What do you mean?”
Ishimaru – “I am going to build a true meritocracy. A society that rewards valiant effort! In that way...I will have truly won against you!”
Celestia – “Hmhmhm...quite an interesting quibble. Well then, I shall gamble on when you fall and make a mistake.”
— Ishimaru telling Celestia about his ideal world

Ishiceles is one of the many ships that sailed as a result of the interactions between characters in the Ultimate Talent Development Plan and their canon interaction. It is also one of the not very popular in the community. A lot of people are against it though, due to the fact that Celestia made Hifumi kill Ishimaru. Both of them have a relationship with Hifumi, Ishimaru and him being enemies, and Celestia and him being friends and partners. Nevertheless, they do seem to be very close in the Ultimate Talent Plan, seeing that they both call each other by their nicknames. This ship is also very popular with people who like to ship victims with their killers.

Nonetheless, because they mostly just interact with each other in the Ultimate Talent Development Plan, only a small part of the community actually ship the two. It's often overshadowed by more popular ships, with Celestia having Celesgami and Celesgiri, and Ishimaru having Ishimondo and Ishikuro. 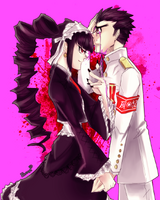 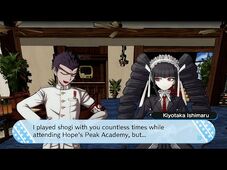