Classmates; both are dead

Ishikuro is a het ship between Kiyotaka Ishimaru and Mukuro Ikusaba from the Danganronpa fandom.

Within the first game, Danganronpa: Trigger Happy Havoc, the two very rarely interact directly due to Mukuro's death in the first chapter. Before her death, however, Mukuro (disguised as her sister) prevents Ishimaru from scolding a late Makoto Naegi. The two also fail to interact during their Ultimate Talent Development Plan events. The two later interact in the Danganronpa Comic Anthology story "The 16th Student". Mukuro Ikusaba sneaks out to the warehouse out of disguise to grab a late night snack, assuming that no one would be awake. However, Ishimaru sees Mukuro, and Mukuro knocks him out. The next morning during the classes daily meeting, Ishimaru says that he saw someone at the storage room. Unfortunately, no one believes Ishimaru besides Mukuro (now in Junko's disguise), causing Ishimaru to go on steakout with Junko. Mukuro told Ishimaru how things have changed since the class had gotten trapped in the killing game, and Ishimaru gives Mukuro advice saying that change is nothing to regret. Ishimaru sees a siloulette similar to Mukuro, however it was revealed to be Celestia Ludenberg, with her drill twintail extensions removed; thus ending their steakout. At the end, Mukuro remarks that it was fun to talk to Ishimaru. In the very end of the story, it is said Ishimaru gifted Mukuro his briefs as an apology for the misunderstanding.

However, there are some similarities that exist between them. They are both from Class 78, meaning that it is likely they interacted before the Killing School Life, only for Kiyotaka's memories to be removed.

Furthermore, they both display a sense of duty, Kiyotaka always displaying loyalty adhering to the rules presented by the school and by society, and Mukuro displaying her loyalty to her sister. Neither often question these authorities within the contexts of the game, Mukuro only rebelling against Junko after her failed assassination in Danganronpa IF. They both take their responsibilities and their talents very seriously.

They are also both shown to be very indebted to a specific person, Ishimaru being closely attached to Mondo Owada as Mukuro is to her sister.

Having such a small amount of canon content, this ship is often overshadowed by the two's more popular ships. Both Ishimondo and Naekusaba often pull attention away from this pairing, however, there are some who still celebrate this more uncommon pairing.

Content of the duo is elusive, but there are those who firmly believe that if the two were able to hold more interactions with one another, as well as Ikusaba's true identity being revealed, the two could have become closer. 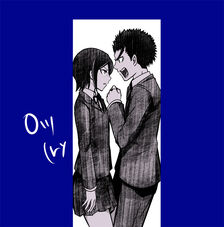