• Tragic Bromance
• Not So Different — in the manga we can see their conversation in the sauna, where Kiyotaka and Mondo open up to each other and discover that they're more similar than they thought.
• The Mourning After — Kiyotaka cannot accept the fact that Mondo is dead.
• Bittersweet Ending

Ishimondo is the slash ship between Mondo Oowada and Kiyotaka Ishimaru from the Danganronpa fandom.

Mondo and Kiyotaka did not get along at first, which was not surprising, as Kiyotaka was the “Ultimate Moral Compass”, while Mondo was the “Ultimate Biker Gang Leader”. They formed a rivalry, which quickly escalated to the two spending a prolonged period of time in a high-temperature sauna. This was to show a test of manliness and strength, and whoever were to give up would be the lesser man.

However, as soon as this event was over, the next morning Mondo and Kiyotaka acted as if they had been seemingly inseparable. They would laugh together and have their arms around each other's shoulders in a “friendly” manner.

When Mondo was found guilty in the second trial, the only person who did not vote him as the culprit was Kiyotaka, who voted for himself instead. With this, it seemed like Kiyotaka was willing to have himself and everyone else die before he would let Mondo himself. He broke down, bawling and screaming, yelling and asking why he did it, clearly devastated that he was losing such a close friend.

During the third Chapter, when Kiyotaka was speaking with Alter Ego, the program changed its appearance and attitude to match that of Mondo's. Through Mondo's inspiring words, Kiyotaka then went through a self-proclaimed “transformation”, in which his and Mondo's “spirits” became one. He started addressing himself as Kiyondo, which is a culmination of both his and Mondo's names.

In the manga we get to see what happened between Kiyotaka and Mondo while they were in sauna alone. At first they were offending each other like before. But with time they started a more sincere conversation. Mondo told him a lot about his gang, his brother and his dog, while Kiyo told him about his grandfather. While they were talking, it turned out that they weren't really that different. Both of them put a lot of pressure on themselves to be a man others wanted them to be. To prove that they were strong and able to fix things to other people. Those things made them much closer to each other and because of them Mondo and Kiyotaka started understanding each other and bonded over their similarities.

By the end of the scene, Ishimaru told Owada that he was a good guy after all, which made Mondo blush. When Kiyotaka almost passed out in the sauna, Mondo took him out of the steamy room, admitting that he thinks Ishimaru is strong. After they leave the room, they come to a conclusion together, that they're like siblings from different mothers. That's when they decide to call each other 'brothers' ('kyoudai'). Later on they also decide to take a shower together. At the end of the chapter, after Owada says that he's going to take off his clothes, Kiyo says that he'll wash Mondo's back.

The ship was formed mostly as a result of Mondo and Kiyotaka's friendship being so strong that it included some suggestive elements. Its starting point being the boys' duel in a sauna also helped. Abridged series added even more fuel to the ship by making Makoto claim the heard some moaning in the sauna, which causes Taka to shout at him to forget it. The ship is also enjoyed by fans who like to see enemies bond and become friends or lovers. The popularity of the ship also came from the two's polar opposite personalities, with Mondo being the rebel type biker gang leader and Kiyotaka being the type to strictly follow the rules.

On AO3, this is the most written ship for both characters included. It's also the most popular shipping choice for both among the fandom in general. 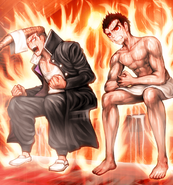 Total broclipse of the heart
Meme

Danganronpa Ishimondo (What about our Love)
Edit

Ishimondo AMV - Once Upon A Dream

Chishimondo refers to the ship between Chihiro Fujisaki, Ishimaru and Owada