〉You don't get yourself killed either, you idiotic Crimson Oni.〈
—Sara, responding to Itto's message on the bulletin board

Acquaintances; One-sided rivalry on Itto's side

• Belligerent Sexual Tension
• Hair Contrast Duo
• Opposites Attract
• Rivals to Lovers
• Childhood Friend Romance
• Battle Couple
• Emotions vs. Stoicism
• All Girls Want Bad Boys
• Like an Old Married Couple
• Married to the Job
• Ship Tease
• Tsundere
• Will They or Won't They?
• Red Oni, Blue Oni
• You Are Not Alone
• Not So Different
• One Head Taller

IttoSara is the het ship between Arataki Itto and Kujou Sara from the Genshin Impact fandom.

Itto and Sara share similar childhoods as both were orphaned at a very young age and were forced to raise themselves in order to withstand the harsh obstacles life has in store for them. It is revealed in Itto's Story on his character profile that the two fights that he will never forget both involve a Tengu as his opponent. The first having happened in his childhood where the two engaged in a sumo wrestling match atop Byakko Plains which resulted to the two tumbling down the mountain, rendering Itto unable to get up, thus, having the aforementioned young Tengu carry him back to town. While the other battle being the time he lost to Sara which resulted in his Vision being confiscated. It is heavily implied that the Tengu in his childhood is Sara herself, but because she was mentioned to have looked more like a boy in her youth, he does not suspect them to be one and the same.

Itto's Vision was confiscated by Sara after he was defeated by her while the Vision Hunt Decree was still active. Ever since then, Itto has been determined to have a rematch with her. Throughout all of Inazuma, he proclaims his intent to duel with her by vandalizing bulletin boards, much to Sara's annoyance.

When talking to Uesugi, he talks about Itto and his plan to take revenge on Sara ever since she confiscated his Vision. Telling that Sara saw that he was very serious about the revenge and his fighting spirit was commendable, so they picked another day for the duel. But Uesugi told that somehow, Itto insisted that due to some weird Oni rules, the rematch must be a sumo showdown on the crossroads. However, the duel never happened as Itto was dragged away by a masked lady.

In the Ritou Harbor Bulletin Board, Itto asks Sara if she fled again, thinking that she must've fled in the night after hearing his name. Asking her if his name is scary in the battlefield, but Itto claims that it's fine as he shall wait for her return in the Harbor. Itto tells her to don't dare die on the battlefield as she still owes him a duel. Sara replies to his messages, shutting him and asking if he's done yet. She says if this was some kind of blessing before she sets out for war, then she shall accept it. She reminds him to not kill himself either, and calls him a "idiotic Crimson oni".

In the Inazuma Commercial Street Bulletin Board, Itto tells Sara to stop hiding, telling her to crawl out of whatever hole she's in, and fight him fair and square. Someone replies on his messages, however it wasn't Sara who was the one who replied. They said that Sara promises that she has nothing to do with Itto, and that she will handle these messages immediately.

In the Hanamizaka Bulletin Board, Itto comes back, messaging Sara, asking her where she is. Itto tells that he will never forget that she confiscated his Vision away, saying that as long he breathes, he will still keep coming to her and reminds her to not forget that. Someone replies to Itto's messages, they replied the same thing, saying to not worry as they told that Sara has nothing to do with Itto.

In Yoimiya's Story 4, it is stated that the handmade knicknacks she makes are not just popular with the children, but are just as well-loved by adults as well, citing Itto as a prominent example. It is stated that Itto occasionally comes over to buy some of her handiwork to bring as offerings to "his self-declared nemesis" in hopes of instigating the long awaited rematch she promised him.

“Tsk... I can't help but get a little irate when his name comes up. He kicked up a big fuss when I confiscated his Vision, by far the noisiest person... no, the noisiest oni I've ever encountered. He showed he was enough of a man to admit defeat, but the rematch he insisted upon... Tsk... To this day, I still don't want to talk about it. If you really must know, you can go and ask him yourself.”
— Sara's voiceline "About: Arataki Itto"

“You know what, yeah, she beat me during the Vision Hunt Decree. I'm not ashamed to admit it. When you lose, you admit defeat, and when you screw up, you takee it on the chin, like a man! And anyway, let's not forget which one of us won't agree to a rematch — her, the tengu warrior! It's just a sumo street fight, I mean, what's she so afraid of? If she keeps snubbing me, I'm gonna have to stop calling her Kujou Tengu and start Kujou Chicken! Heh, we'll see what she thinks of that.”
— Itto's voiceline "About: Kujou Sara"

“Don't you dare die on the battlefield, Kujou Tengu! You still owe me a duel!”
— Itto to Sara

“You don't get yourself killed either, you idiotic Crimson Oni.”
— Sara to Itto

Fans have taken note of Sara's and Itto's dynamic ever since Inazuma has been released, although the ship only started to gain traction after more information spread about Itto and especially after his design was revealed. People enjoy the rivalry aspect of their relationship, as well as the trope of the loud, active character shipped with the disciplined, analytical character.

A lot of fanart pokes fun at their relationship, featuring Itto demanding Sara's attention or being affectionate while Sara is annoyed. Another trope that can often be observed in fanwork is Sara being the dominant "girlboss" partner in the ship that has to keep the more active Itto in check.

IttoSara, although only recently gaining attention around October 2021, has already been in the spot of controversy. Some people have claimed their relationship is unhealthy and that Itto harasses Sara, but many disagree with this perspective as Sara is a perfectly capable woman who would not allow such a thing to happen if ever this were true and could easily defend herself when the time comes.

It is also heavily implied that Itto and Sara are the descendants of Iwakura Doukei the Oni fighter and Teruyo the Tengu warrior, rival-lovers who fought their last battle on Byakko Plains, instigated by Teruyo herself. After being bested by Doukei in battle, she tells him that she is afraid she must continue on with her duties, thus, telling him to kindly forget about her before bidding him farewell forever. 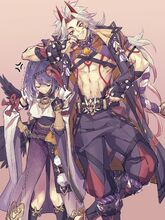