IttoXiao is the slash ship between Arataki Itto and Xiao from the Genshin Impact fandom.

Prior to the Perilous Trail questline, Itto and Xiao didn't have any canon interaction with one another.

In the beginning of the events of the Perilous Trail interlude chapter, Arataki Itto and Kuki Shinobu, his deputy, sojourn to Liyue in order for the latter to retrieve the law degree she earned from Tongwen Academy. Due to the Sakoku Degree that prevented Inazumans from leaving the nation, Kuki was unable to fetch her degree shortly before her graduation. While the Traveler and Paimon come to investigate the artifact, the Chasmic Nail, they encounter Yanfei and Yelan as well. During a confrontation between Itto and Yelan, the ground buckles and causes the group to plummet to the Chasmic Bed below, stranding them.

Shortly after, the noise arouses the interest of Xiao who comes to investigate. There at the Chasm for his own reasons (to find a mysterious someone), the Yaksha encounters the group but then departs. Upon meeting him, Itto proceeds to approvingly comment that Xiao seems as tough as him and like "a solid dude", establishing Itto's positive impression of Xiao early on.

After clearing the domain, the group finds themselves back in the same place they started. Believing that an evil youkai is responsible, Itto summons Ushi to dispel the demon. Ushi looks around but is unable to find any other exits, much to Itto's surprise. In the effort to look for exits, the Traveler decides to call Xiao, but despite saying his name, he fails to appear. It's at this moment that Itto comments how weird it is and is the first to mention that Xiao could be in danger, expressing concern for his well-being.

After a period of rest, the group decides to continue on their journey through a new portal. They enter the Domain within and explore it. As they do so, they hear Xiao talking to someone and he appears to be struggling, prompting them to assist. Upon solving the puzzle, a mysterious door appears and the group convenes there, only for a rift to appear; they hear the sounds of an unknown battle Xiao is engaged in and Itto urges that they should aid him as soon as possible. Itto, believing that no one was inside, is surprised to find an illusion of Xiao pop up and calls out to him, asking if he's okay. Xiao is soon surprised to see the others and why they came, upon which he realizes that the domain is dangerous but is abruptly cut off while insisting that they immediately leave. Itto then leaps into the hole and hurts himself after declaring his intent to save Xiao.

The group encounters a door which Itto tries to open with brute force, only to notice a switch and embarrassingly opens the door with it after theorizing that Xiao could be inside, determined to find him beyond. Instead, he, Kuki, and Yanfei step within and realize it shows them fears they have, but otherwise reach a dead end. Deciding to return to camp, Yanfei and the Traveler manage to discover a way to rescue Xiao and bring them within their midst. Injured from a battle they heard him engaged in earlier, Xiao rests while Itto expresses worry for the Yaksha.

After a good rest, Xiao explains that he is looking for his missing brother-in-arms, Bosacius, and believed that he was inside The Chasm. Xiao's testimony about the domain's chaotic nature confirms Yanfei's theory that the domain is an antlion's den, using illusions to slowly entrap their victims. Xiao proposes that he'll use up his powers to get the group back to the surface at the cost of him being left behind, which the others vehemently oppose. A poignant subject that comes to mind is Xiao's self-sacrificial tendencies that reflect on Itto's own. Ushi informs Itto of the argument, in which he decides to punch open a path to avoid unnecessary sacrifice, although he ends up expending all of his strength in the process. Paimon comments that Itto's self-sacrificial idea was identical to Xiao's.

Catching Itto after he falls unconscious, Kuki then proceeds to inform everyone present that Itto sees them all as his teammates, which naturally includes Xiao. She says that Itto hates it when people sacrifice themselves, but has a tendency to do it himself. Unlike Xiao, however, Itto doesn't do it for the sake of matyring himself, but out of the belief that he's strong enough to face any obstacle. This is similar to Xiao's own reasoning for sacrificing himself, in that he would, theoretically, be the only one strong enough to see them all escape. Following this speech, Xiao states he's sorry. Remaining behind, Yanfei, Yelan, the Traveler, and Xiao forge ahead while Kuki remains behind to watch over Itto, protected by a spell of Yanfei's.

After escaping, Itto wakes up and realizes that he missed the show. While Yelan leaves, Yanfei decides that for all the trouble she caused, she'd invite Arataki and Shinobu on a tour in Liyue. Before this, and after Zhongli rescues Xiao from sacrificing himself, Ushi has a message for Xiao that Itto translates. He then relays it to the Traveler to tell. When Xiao and the Traveler meet at Pervases' temple, Traveler tells Xiao what Ushi wanted to tell him.

The message Ushi tells Xiao is that, as a bull capable of performing exorcisms, people used him to fend off demons before he met Itto. Because of how he was accepted as a member of the Arataki Gang, he hasn't left Itto's side since. He goes on to say that, though he doesn't have any grand philosophies, people like Xiao should spend their days around those who make them happiest. Continuing, Ushi hopes that, even if the power of a Yaksha might be harmful to other people, it doesn't mean Xiao shouldn't hang out with them. This causes Xiao to reflect on how Bosacius and the other five Yaksha wanted the same ideal that Ushi stated and to live peacefully among mortals. Xiao also mentions how he couldn't have succeeded without everyone's help, and the Traveler then leaves Xiao to meditate on what occurred and how it made him reconsider his fatalistic, sacrificial plan.

“Heh, that guy looks pretty tough, almost as tough as me. Seems like a solid dude.”
— Itto, about Xiao after their first meeting.

“No one's staying behind to let anyone else out, alright? It's time... for action!”
— Itto, in regards to Xiao's plan to sacrifice himself while the others can escape.

“Another thing with the boss is, he hates it when other people sacrifice themselves, but always seems to end up doing it himself.”
— Kuki Shinobu, in regards to Itto rejecting Xiao's plan of self-sacrifice.

Initially, before the 2.7 patch release, what drew fans to the ship was the idea of Xiao, the Conqueror of Demons, encountering Itto, a Crimson Oni, and shenanigans ensuing because of it. Some other components that drew shippers to the pairing was the potential for enemies-to-lovers or rival-to-lovers due to the contrasting nature of their professions. With Xiao as a demon hunter and Itto as the proverbial demon, it's another draw to the pairing.

Additionally, them having opposite personalities is another source of appeal, with Itto's extroverted, sunnier disposition complementing Xiao's introverted, "emo" personality. They seem to be a classic case of "opposites attracting" in the eyes of their fans.

Currently, due to the ship's newness, there's currently a modest amount of content on social media and on fanfiction platforms. Presumably, it has rivals in ships like IttoRou and IttoSara, currently Itto's two most popular ships, and XiaoVen and Xiaother, Xiao's more popular ones. For the time being, it's a new ship considered a rarepair that might see more additions and contributions in the future. But, given the recentness of the 2.7 event, it's likely that the ship's popularity will continue to rise with time. 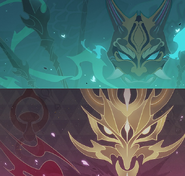 Key art of the Hidden Dreams in the Depths event.