IwaOi is the slash ship between Hajime Iwaizumi and Tōru Oikawa from the Haikyu!! fandom.

Iwaizumi and Oikawa have known each other since they were children. They started to play volleyball together, so naturally Iwaizumi witnessed Oikawa's growth as they both entered Kitagawa Daiichi, where Iwaizumi saw Oikawa over-exert himself for the sake of surpassing Kageyama. During that time, Iwaizumi scolds Oikawa for overworking himself and for forgetting that "the better six are stronger", then headbutts him to wake him up. They lost to Shiratorizawa in their years in Kitagawa Daiichi. During the award ceremony, where Oikawa receives the Best Setter Award, they're both in tears, as they are frustrated for not winning over Shiratorizawa in a single match.

After those three years, they enter into Aoba Johsai High, where they continue to play volleyball together. In the timeline portrayed in Haikyuu!! when they have their debut, they are in their third year. Oikawa's the team captain while Iwaizumi's the vice-captain. In addition, Oikawa's the setter and Iwaizumi's the ace/wing spiker, making the pair have the hitter/setter relationship.

In the extra chapter in Volume 17 of Haikyuu!!, they thank each other for "these three years" after they go to their usual ramen shop with their teammates. This part is also adapted into the anime. At the end of the Haikyu!! movie: Sainō to Sensu, after the 3rd years leave the gym, Oikawa and Iwaizumi are seen walking together. Though Iwa tells Oikawa that he's the type of person who'll never be satisfied with volleyball, he should continue becoming stronger. After that, Iwa tells Oikawa that he's proud to have him as his partner and tells him that he's a great setter. With that, flashbacks are shown of the two growing up together, fist-bumping one another and after the montage, they fist-bump each other, with smiles on their faces.

They are inseparable and often seen together. Iwaizumi always looks out for Oikawa, and Oikawa puts a lot of trust in Iwaizumi, causing them to be a formidable team in volleyball as they have near-flawless dynamics and trust in each other. Iwaizumi also looks after Oikawa, telling him not to practice too much and yelling at him when he overworks himself. They care for each other and have always shared a love of volleyball. Iwaizumi is the vice captain of the volleyball team.

They call each other by nicknames - Oikawa calls Iwaizumi "Iwa-chan" (just like he calls Hanamaki "Makki" and Matsukawa "Mattsun") and Iwaizumi calls Oikawa a variety of insults, including "Shittykawa", "Crappykawa" and "Trashykawa". Neither of them seem to mind the nickname, despite Oikawa often whining "That's mean!" after Iwaizumi insults him.

After the time-skip, Iwaizumi has to make a trip to California, USA, where he accidentaly meets Wakatoshi Ushijima, Oikawa's nemesis. After they spend some time talking and watching videos, Iwaizumi asks him to take a photo with him so he could send it to Oikawa, knowing well it will make Tōru blow a fuse.

Oikawa – “What? Don't naturals like [Kageyama] tick you off, too?”
Iwaizumi – “Smug pretty boys who get fawned over by all the girls tick me off more.”
— Chapter 16

“You're the greatest partner I've ever had and the greatest setter I've ever known. Even if we're never on the same team again, that will never change.”
— Iwaizumi to Oikawa after their last match, Chapter 153.5

In most IwaOi fics, Oikawa is, similar to the canon universe, popular and charming, often teasing Iwaizumi. Iwaizumi is most commonly portrayed as Oikawa's childhood friend. They are inseparable as friends, and also as a couple. Oikawa often overworks himself, and Iwaizumi looks after him by paying close attention to his health and furtively leaving signs that he cares. Iwaizumi is often portrayed like he does not care about Oikawa on the outside, but he actually cares about him deeply, and will do anything and everything for him.

A common dynamic between them is Oikawa misunderstanding Iwaizumi, thinking that he is just here because he has been with him from childhood, and not because he has any romantic attachments to him. But of course, it is the contrary—Iwaizumi cares for Oikawa very, very deeply. He will do anything to protect him.

Another common dynamic between them is Iwaizumi pining for Oikawa (like in one of the most popular and influential IwaOi fan fics the courtship ritual of the hercules beetle). In the canon universe, Oikawa is very popular with girls—it is distinctively similar in the fanon universe. As Oikawa dates more and more girls, Iwaizumi finds himself disappointed and hurt when he sees Oikawa with his girlfriend. Their relationships don't last long in most cases, and Oikawa dumps the girl or vice versa. Then, it is revealed that Oikawa is trying to distract himself from Iwaizumi, but eventually fails to.

Some fanfictions are started as Iwaizumi and Oikawa not knowing each other and growing to love each other. This AU isn't as popular as the childhood friends to lovers AU.

In the Final Haikyuu Quest universe, Oikawa is the Grand Demon King, while Iwaizumi is a knight and an ally of Hinata. They meet in the final boss battle, where Iwaizumi reminisces their memories from their childhood—this does not end well in most cases; very often do they find themselves grieving the other.

Their main tropes are misunderstandings, mutual pining and slow burn. Angst is always welcomed in their fics, even though there is also a remarkable amount of fluff. They are also often paired with another couple, MatsuHana (Matsukawa Issei and Hanamaki Takahiro) in fanfiction. In a lot of fanfiction, the Seijou third years frequent a ramen shop where they eat together and Oikawa pays in most cases.

Post-timeskip, Oikawa has moved to Argentina, where gay marriage is legal, and became a citizen there. Many fans joke about how he moved there so he can legally get married with Iwaizumi. This has also been incorporated into fanworks such as fanfictions, with many of them depicting the long-distance relationship Oikawa and Iwaizumi would have, as they live in different countries.

IwaOi is the mostwritten Haikyu!! ship on AO3, with currently around 17679+ works. It is also subsequently the most popular ship for both Iwaizumi and Oikawa. 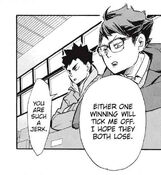 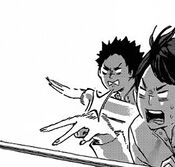 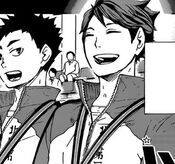 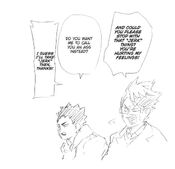 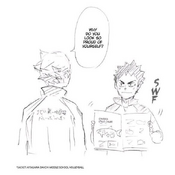 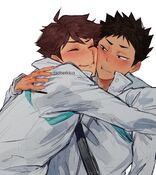