Shipping Wiki
Register
Don't have an account?
Sign In
Advertisement
in: Ships, Ships/Friendships, My Hero Academia/Ships,
and 5 more

Friends, Izuku is like a big brother to Eri

IzuEri is the friendship between Izuku Midoriya and Eri from the My Hero Academia fandom.

Eri bumped into Izuku while he was with Mirio on patrol, and as Izuku kneels down to tend to her, Overhaul approaches them and this gets Eri to cling onto the young hero in-training. Izuku then wraps his arms around Eri to protect her from the people she is frightened of, making him the first person to hold Eri a kind caring way in a very long time. As he can tell that Overhaul's treatment for Eri is something bad and this made him worry for her. Their mission from Sir Nighteye, however, has Mirio telling Izuku to let Eri go back to them. Even though Izuku didn't feel committable about it. After Eri returned to Overhaul and was later placed back into her room, she recalls the warm embrace Izuku gave her. While on Izuku's end, he learns that Overhaul is using Eri's body to create his Quirk-Destroying Bullets, and this made him feel terrible about not saving her when he and Mirio should have.

Deku then protects Eri in Mirio's place after she could get to him as Mirio had passed out due to his injuries and had left Eri alone with no choice but going back where Izuku and Overhaul were. During their fight, Deku asked Eri for activating her power, rewind, assuring her that everything would be fine. When she did what he had ordered, Deku could finally defeat Chisaki with her power while he was holding Eri on his back. After it, just right after Deku calmed himself and Eri, he felt some sort of pain and he noticed that Eri didn't deactivate her quirk, since she couldn't handle it quite well and with it both Deku and Eri were suffering with the quirk's power. Luckily Aizawa could desactivate it from a distance, saving both Izuku and Eri.

After Mirio had invited Eri to the U.A's Cultural Festival, Izuku asked for Eri's tastes, she says that she liked apples and Izuku promised her that after their performance, he could get her a caramelized apple. Right during Class 1-A's performance, Eri could see Izuku in the distance as she saw him dancing along with his other classmates together and she could finally smile because of that, and also of how colorful and cheerful the performance was. After it, Eri described to Izuku how awesome the act was, and so Izuku is seen tearfully agreeing with Eri, not only because her description of the performance, but the fact that he could finally see her smile. As promised, before Mirio and Eri retire from the school, Izuku lends Eri the caramelized apple, and so she could finally taste it, and after it she smiled at the sweet flavour of it.

In the School Briefs 3, before the Cultural Festival could officially start, Izuku had been showing Eri about U.A and their places with Mirio. During the same book it is also revealed that Izuku had been asking for some ingredients for the caramelized flower in different food places after the festival, and so he started to work on it.

At the beginning of the Pro Hero arc, Izuku learns that Eri will now be living at UA under the teacher's care. As she has no family who'll be able to look after her, and can't stay in the Hospital forever. Izuku is pleased with the fact that he'll be able to see Eri again around campus and she'll be surrounded by people who care about her. He also learns that Eri's horn is the source of her quirk and Aizawa plans to help Eri learn how to control it. Izuku learns what Aizawa has in mind of Eri's training when he was spending time with her and Mirio, before he sees Eri being scared of "U.A. Dark side," and how Neito coping Eri's quirk could help her gain a better understanding of it; wasn't Neito wasn't able to do so. This has Eri feeling terrible about her own quirk and apologizes for the trouble it has caused everyone. Even though Eri sees her quirk as a curse, Izuku thinks that it is amazing and reminds Eri of how she used it to save him. Along with telling her that a quirk is only terrible if it is used in that way, and Izuku believes that Eri can use it for good. This has Eri telling Izuku and the others that try her best.

Because of Eri's young age, fans prefer to ship them as friends or as a family, but there have been those who have shipped them romantically, by making Eri older and more around Izuku's age. Like with Mirio, fans tend to focus on the family-like bond Izuku forms with Eri from the times he acts like a caring big brother to her; since some fans are hopping that Izuku might one day adopt Eri. Their sibling-like bond is also one of the reasons why fans have them mirror the Kamado siblings in a Demon Slayer AU or crossover. Along with a few versions of the Villain!Deku AU having Deku saving Eri from Overhaul and later takes her under his wing in the villain world. Because Eri isn't the first kid that Izuku has befriend and saved, some like to compare IzuEri with KotaIzu and MiriEri.

On AO3, the friendship has 778 fanfics, along with 37 het fics, while Fanfiction.net has 197 fanfics on the two. Tumblr and Deviantart also has many fanart image of Izuku spending time with Eri. 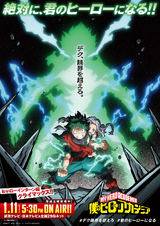 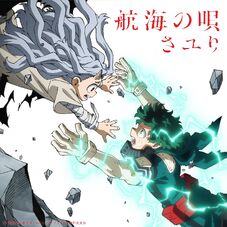 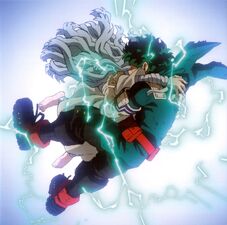 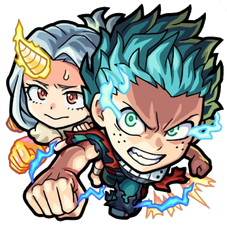 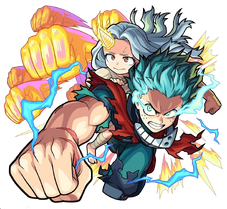 IzuMiriEri refers to the ship between Izuku Midoriya, Mirio Togata and Eri.