IzuMina is the het ship between Izuku Midoriya and Mina Ashido from the My Hero Academia fandom.

Mina and Izuku are classmates and they trust and respect each other. While Izuku is shy, Mina is cheerful and sociable so despite their differences, they managed to become friends. There are several cases that show their friendship and despite having limited screen time, it's clear that their relationship is positive ​and friendly.

In Kirishima's flashback, Mina had a moment where she ran right into a seemingly dangerous situation to protect her friends, which is quite similar to Izuku running in to save Bakugou in the beginning of My Hero Academia. They both were scared during those situations, but still didn't hesitate to help their friends. Showing that both are characters that have heroic personalities.

Izuku and Mina have only a few canon interaction with each other, but their interactions are always quite friendly. Mina shows great admiration in Izuku for his Quirk and when she meets him she approaches him to congratulate him. Mina likes teasing Izuku on his muttering, though she never shows actual annoyance on it, unlike most characters. Mina also worried about him, since she goes to visit him when he ends up in the Hospital after his fight against Muscular.

Their friendship is shown on a deeper light during the School Festival Arc when Class 1-A decides to do a concert that includes dancing. Izuku was impressed when Mina showed her dancing skills and then asked if he could teach her to dance. Mina eagerly agreed to teach him and made an effort because she wanted Izuku to learn. Despite Izuku being bad at dancing, they had a good time together. In his fight against Gentle Criminal and La Brava, Izuku remembered when Mina taught him to dance in the schoolyard and used his dance steps during the fight, internally thanking Mina for his victory.

Izuku and Mina were in the same team during the match against Class 1-B at the Joint Training Arc. Izuku's team was stressed about the match, but he encouraged them greatly and Mina was shown to have confidence in each other's powers, including Izuku. When Izuku's Quirk got out of control in battle, Mina cried out his name in concern. Once Izuku regained control of his Quirk, they were shown to fight together with co-ordination, and had good teamwork skills. After the match ends, Mina worries about Izuku again as she asks if her Quirk was acting strange, and taunts Ochako for grabbing Izuku so tightly in her attempt to save him, causing both Izuku and Ochako turn red with shame.

Mina shows great interest in Izuku's relationship with Ochako and they wish for them to end up together, such as when she witnesses a cutesy exchange between Ochako and Izuku in which the two blush and bump fists, that watches with much delight. When Izuku escapes from U.A. High School ​after the Paranormal Liberation War, Mina is shown to be one of the class members who fights him to return. After the fight is over, she approaches him and begged him to come back to the U.A. so that they could have classes together again, since she didn't want to lose anyone anymore else. Once Izuku returned to U.A., Izuku asked Mina about Ochako and she told him that she was resting. Mina starts asking some questions about One For All along with some of her classmates until Shoto stops them. Mina also remains close to Izuku when he falls asleep due to exhaustion. She also agrees with Tokoyami that they intend to stick close with Midoryia until he defeats Shigaraki.

IzuMina is a rare-pair within the My Hero Academia fandom. Fans prefer more popular pairings with Izuku and Mina, such as, IzuOcha, BakuDeku, TodoDeku, KiriMina, MinaOcha, and a few other ships. The ship is not completely without support though. Despite IzuMina's 'rare-pair' status, the ship has a decent amount of fanfictions on AO3, in fact it is even Mina's 3th most written ship on AO3. There are also people who ship IzuMina platonically, and just appreciate the friendship between the two. IzuMina, despite being a rare pair, is still a well received ship in the fandom. 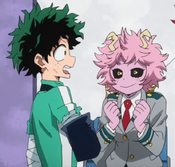 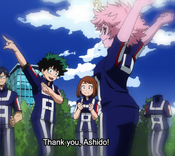 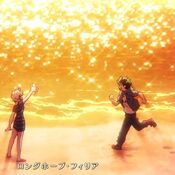 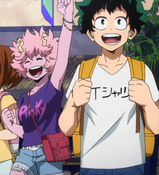 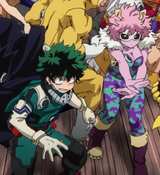 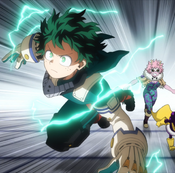 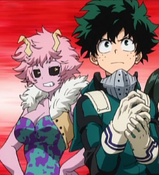 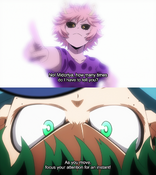 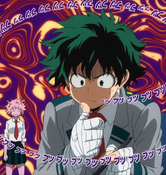 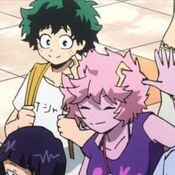 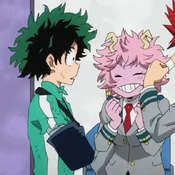 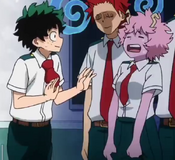 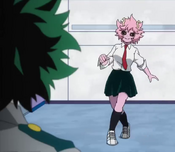 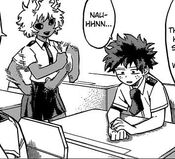 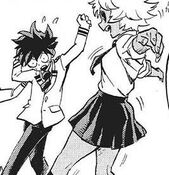 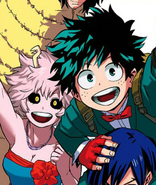 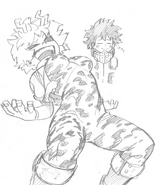 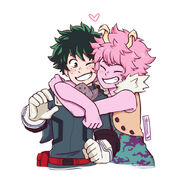 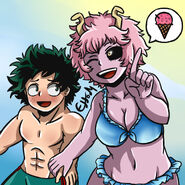 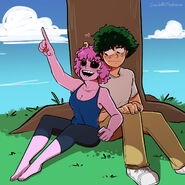 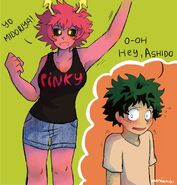