• Comforting Comforter
• Dance of Romance
• Dating What Daddy Hates
• Fake Dating — Twice. Once with Jughead's ex, once with Tabitha's parents.
• The First Cut Is the Deepest — Jughead tells Tabitha about his baggage when they discuss their kiss
• Holding Hands
• Let's Duet
• Meet the In-Laws
• The Muse — While high on mushrooms, Tabitha comes by, per Jughead's request, to watch out for him. When he sees her, he elatedly exclaims, “Tabitha! My muse”
• Office Romance
• Official Kiss — 5x18
• Opposites Attract
• Uptown Girl
• Will They or Won't They?

Jabitha is the het ship between Tabitha and Jughead from the Riverdale fandom.

When Jughead returns to Riverdale as an adult in desperate need of money and a purpose, he finds a lot has changed, including Pop Tate retiring as his granddaughter, Tabitha, is taking over her family business. Tabitha is unimpressed by Jughead's woe-is-me demeanour and his behaviour, telling him off for hogging space in her business, meant for paying customers, to get free wifi. Jughead notices that Tabitha is looking for a waiter and asks to interview for the position, but Tabitha declines, reading Jughead pretty clearly and thinking he wouldn't be a good hire, despite Jughead's protest that she doesn't know him. Archie asks Jughead to write a toast for Pop Tate's retirement party and Jughead agrees. He interviews Pop at the diner, when he spots his creditors approaching. Abruptly cutting off the interview, Jughead begs Tabitha not to tell them where he is and dives behind the counter, as Tabitha looks on incredulously. At a glance from her grandfather asking her to help Jughead, Tabitha decides to take pity on him, warding off the creditors' and firing right back at their derogatory remarks to her, unafraid. She comically takes a jab at Jughead's name to the creditors, knowing full well that he's within ear shot. After they leave, Pop offers to help Jughead with his money troubles and Tabitha looks wary for a moment but Jughead immediately declines, saying he's not that low and that he'll figure something out. This seems to slightly alter Tabitha's perception of him, as she decides to give him a shot at the waiter position, which he accepts without thanking her, asking for another favour: that she call the creditors and inform them that he's employed so he's safe from harm.[1]

One night, when business is practically dead, Tabitha tells Jughead he can go ahead and write if he so desires. Jughead asks her if he can interview her for his next book, lowballing it as a book about small-town life and not the 'sad Americana' exploitative his agent expects him to write. Tabitha agrees and they sit down, Tabitha relaying that she went to business schools and had a six-figure salary at a big company in Chicago. Jughead seems astounded that she wouldn't stay and enjoy the opportunities he assumes she must've clearly had, but Tabitha underlines that, unlike high-paying corporate life, running Pop's has value. It's her family business and legacy and something she really cares about succeeding at. They're interrupted by customers, as Tabitha explains her marketing plans for the future of Pop's Chock'lit Shoppe. They later attend karaoke night at Toni's Whyte Wyrm, where Tabitha's surprised at Veronica's stellar performance while Jughead's still in his sombre mood. They're not hanging out with everyone Jughead knows, but playing darts together and having a beer. Tabitha suggests that Jughead look into The Mothman, giving him a lead on an old loner who can dazzle Jughead with this tale. After having talked to Dreyfus, Jughead tells Tabitha about it at work as it's another quiet night at Pop's and he's writing. Tabitha says she'd be interested in joining further exploration of the story with him and Jughead's surprised. Taken aback for a second, he says she's welcome, intrigued. Tabitha gives him a flirty look and walks off as Jughead sits, seeming surprised that she might be interested in him, and perhaps at the thought of something new.[2]

Jughead – “Wait that's not-”
Tabitha – “It is. Yeah. A special delivery courtesy of Nana Rose Blossom, straight from The Twilight Zone[3]”

Jughead researches the Mothmen at the library and brings his findings to Tabitha. She's skeptical about the miners' tales about aliens, but Jughead persists with another article on residents seeing a bright light in the sky. Jughead points out the eye witnesses listed to Tabitha's shock and he cheekily asks if she can get him an interview. One evening, they sit down with Tabitha's grandfather, Pop Tate, and he relays to them what happened that night in the '70s. Pop says they all figured the lights in the sky were military testing. Asked by Jughead, Pop relays that he never saw the lights again, but that he wishes they would return, which Tabitha admits gives her goosebumps. Pop points them to talk to someone else who was present that night — Rose Blossom. When they talk to Nana Rose, she confirms that it was the Mothmen, to which Tabitha remains skeptical. She tells them she found a dead Mothman on the Blossom grounds, they performed an autopsy and that she kept it preserved in maple, although the Mothmen came looking for the deceased and she lied about having cremated them. She offers to find it for Jughead who looks bemused, while Tabitha is not buying a word. Later on, Jughead walks in the door at Pop's to find Tabitha standing next to a Blossom barrel containing the 'specimen', which they unwrap, as it were, in the backroom. Tabitha's reticent at just having it there, and it's probably a health code violation, but they seem mostly concerned with someone seeing it. Jughead has the night shift and says he'll make sure no one does. During the night shift he's drinking and sees a bright light outside Pop's, just as Pop Tate described it. He wakes up having lost 4 hours and tells Tabitha about it later on. She asks if he'd been drinking and he sheepishly implicitly confirms it. Tabitha looks at him, concerned, but Jughead attempts to skip over it, pleading with her to come with him to the backroom, where he shows her that the Mothman corpse has disappeared.[3]

〉Oh, God. Where to start? Look, I'm- I'm sorry. I'm sorry I haven't called. I'm just sorry for everything. If you're blaming yourself about me wandering off, don't. I was high out of my mind. I'm fine. I'm safe - more or less. I'm heading to New York - there's something I need to confront. Not sure what, but, I know I wouldn't have got this far without you. When I get back to Riverdale, maybe we can finish that dance〈
—Jughead's voicemail[4]

the beldam | CREEPSEED
playing darts at the whyte wyrm[2]

People expect this pairing to unfold and there are a few reactions: most are concerned, because of the show's storied mistreatment of its characters of colour, that Tabitha will be treated as a 'diversity hire' and not be given her own substantial story. Then there's the notion that another alliterative T entered the show as a love interest for Jughead and was subsequently demoted to extra: Toni Topaz. There's excitement about the pairing if it's given a fair shot and isn't treated like Toni was - as a speedbump on the Bughead highway.[5][6][7][8][9] Overall, the general consensus is that the show better treat Tabitha well and as a character in her own right, regardless of whether she gets together with Jughead. And then of course there's the requisite klandom outcry of "she doesn't need a bf", "why can't they be friends" that happens when a white fave and woc might date.[10][11] 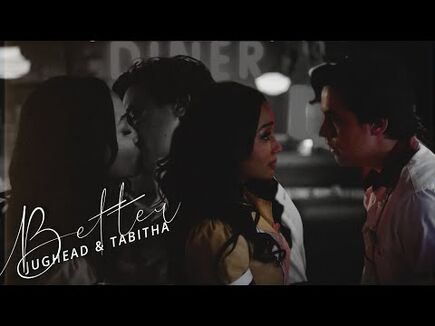 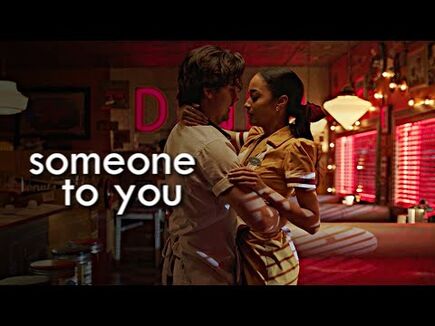 Jughead & Tabitha - Someone To You 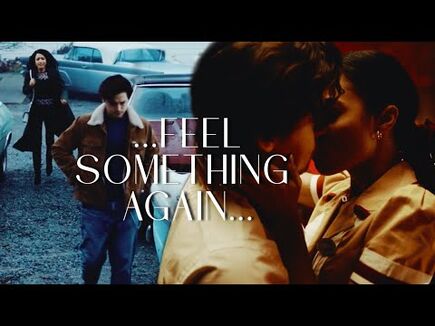 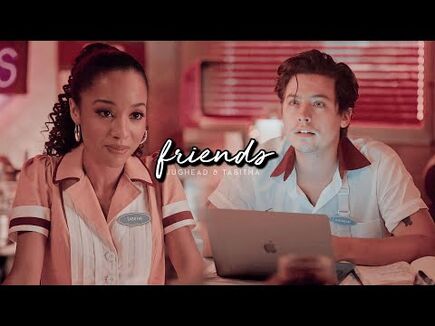 〉I would say that Tabitha and Jughead, what’s nice is that we’ve slow-burned them. I won’t say whether they get together or not, but I will say that it’s been nice seeing them be friends and care about each other, and develop a relationship, and not immediately fall into something when they’re not ready for it. So it means that if they do get together, maybe it’ll be on more solid footing〈
—Roberto Aguirre-Sacasa[12]

〉tabitha and jughead are such an unexpectedly wonderful and fantastic match on #Riverdale. i hope we see more of their blossoming romance and more of tabitha as a character in general, and definitely jughead supporting her like she has him. they are endgame material. ✨〈
—Jay Snow, reviewer[13]

Will Jughead & Tabitha Tate Get Together On 'Riverdale'? Fans Are Convinced (ELITE DAILY • FEBRUARY 2021)