Jailbirds is the het ship between Qrow Branwen and Robyn Hill from the RWBY fandom.

Qrow and Robyn first meet in Volume 7 Chapter 5 when Robyn stops a supply truck that Qrow, Clover Ebi, Ruby Rose and Penny Polendina are protecting. She interrogates them, asking why the supply truck is heading to Amity Colloseum instead of being used to fix Mantle's broken outer wall and gives Qrow the nick name "Five O'Clock Shadow". At this point Qrow and Robyn seem to be in opppsition to each other as Qrow seems to be angry with her for stopping their truck.

The next time they interact is in Volume 7 Chapter 10 where the two work together with Clover Ebi to arrest Tyrian Callows. During their fight against Tyrian in Chapter 11 the three seem to work together well in a fight. In the end, Qrow, Robyn and Clover apprehend Tyrian and take an airship to deliver him to prison.

In Chapter 12, Qrow is added to a wanted list along with Ruby and her friends and he is immediately confronted by Clover who wants to take him in peacefully. This causes Robyn to get upset as she immediately jumps to Qrow's defense despite him saying that he just want everyone to calm down. Despite his best efforts to calm the situation, Qrow and Robyn get into fight with Clover, which allows Tyrian to escape and crash the airship. After waking up after the crash the first thing Qrow does is to check if Robyn is okay. He seems relieved when he finds that she is still breathing. Clover then approaches and attempts to convince Qrow to come peacefully by saying that Robyn needs help. This does not work and Qrow and Clover get into a fight that Tyrian soon joins. The fight ends when Tyrian kills Clover with Qrow's sword.

Near the end of Chapter 13 Robyn can be seen comforting Qrow as she lays her hands on his shoulder.

Qrow and Robyn both make their debut for Volume 8 In the beginning of Chapter 2. It opens with Robyn angrily ranting at Jacques Schnee and when he defends himself and calls Qrow a murderer, Robyn is quick to defend Qrow and gives him a solemn look as she does so and then she quickly gets mad at Jacques and begins yelling at him and Arthur Watts. After Watts is dragged out, Robyn admits that she hates that she can't do anything and Qrow responds by saying that what they can do is kill the man who put them in prison.

Robyn and Qrow are next seen in Chapter 4 where the scene opens with her recounting a funny story about Joanna Greenleaf. After finding no reaction from Qrow or Jacques, she cracks a joke about James Ironwood hiring better cell block entertainment which causes Qrow to smile. Robyn is happy to see that she made him smile. Robyn begins to apologize for Clover's death, telling Qrow that it wasn't his fault. He responds claiming that it IS his fault and that Clover paid the price for Qrow's bad decision.

Qrow confides that when he met Clover, that for the first time in a while he thought he could be around someone without causing them pain due to Clover's good luck semblance balancing out Qrow's misfortune semblance. Qrow then claims that the idea of that is just a childish dream. Robyn admits that she knows a bit of what that's like due to her truth semblance pushing people away out of fear that she'll know all their secrets and that it makes real connections with others difficult. Qrow then says that he had never thought of it that way.

Harriet Bree suddenly enters the room and begins to blame Qrow for Clover's death, saying that even if Qrow said he didn't do it, that it was his weapon that killed Clover. Robyn quickly jumps to Qrow's defense, saying that if Harriet wants to know the truth that she should just use Robyn's semblance to find out. Harriet quickly declines the offer and Robyn claims that Harriet doesn't want to know the truth, she just wants someone to be mad at, namely Qrow. Harriet leaves angrily and Robyn claims that the situation was almost exciting.

In chapter 11 as they are retrieving their weapons, Robyn talks Qrow down from seeking revenge against Ironwood, she mentions that he is a better huntsmen than Clover was , because he has always been fighting for what's right.

Though this ship is easily overshadowed by more popular ships like Fair Game, SpringThyme and Snowbird, it has grown in popularity due to Clover's death and Qrow and Robyn's position as cell mates currently within the show. The fact that both Qrow and Robyn are named after birds is a part of the draw of the ship as well as the basis for the ship name. 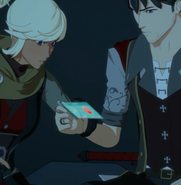