Aladdin
Once Upon A Time

Married (Disney)
In a relationship (OUaT)

“Jasmine: I choose you, Aladdin.
Aladdin: Call me Al.”

Jaladdin is the het ship between Aladdin and Jasmine from the Disney and Once Upon A Time fandoms.

Shortly after Jasmine runs away from the palace, Aladdin spots her in the market place where he falls in love with her at first sight. This is how the thief is able to come quickly to her rescue when he saw her in danger with one of the stall's owners, Jasmine wasn't sure why a stranger is helping her but she takes it and pretends to be his crazy sister until they are able to get away from the ruthless stall owner. Once they were far away from the man and are getting closer to Aladdin's "home", Jasmine thanks him for his help.

Aladdin and Jasmine first met in Agrabah, where Aladdin was a thief and Jasmine was a princess. When Jafar, the Sultan's adviser, turned three people into rats as punishment for stealing, Aladdin stole valuables from those watching the event, one of whom was Jasmine. Jasmine asked Aladdin's help to take down Jafar, whose corrupt ways were ruining the kingdom. Aladdin refused to help at first, but when Jasmine started to loudly accuse Aladdin of stealing from her, he accepted. The two went to the Cave of Wonders in search of the Diamond in the Rough, a weapon that could take down Jafar. During the journey, Aladdin planned to go on a treasure hunt in the cave, angering Jasmine because he only cared about himself instead of the entire kingdom. Aladdin pointed out that people had been suffering before Jafar's rule, and that Jasmine had only decided to get involved once her family was affected.

Despite this, Aladdin made Jasmine smile by giving her an apple. In the cave, they found the diamond on a sword, and in order to steal the diamond without setting off a trap, Aladdin placed a monkey ornament of equal weight on the sword. The diamond, however, crumbled into ash as soon as Aladdin touched it. As Aladdin was protecting Jasmine from a falling pillar, he accidentally used magic to pulverize it. Jasmine revealed that the Diamond in the Rough was actually him, and that he was the Savior who could defeat Jafar. Overwhelmed by this, Aladdin asked to be left alone. Jasmine gave him a royal scarab of Agrabah to show her belief in him before leaving to return to her home.

Not long afterwards, Jasmine was trapped in an hourglass by Jafar. Aladdin saved her by snapping Jafar's staff into half. This also broke Jafar's spell on the Sultan. Some time after Jafar left, Jasmine found out he was somewhere in the eastern provinces. Aladdin decided to pursue Jafar and asked Jasmine to come with him, but she refused as she had to take care of the kingdom.

Aziz is the son of the Disney Descendants versions of Aladdin and Jasmine. He was originally meant to appear in the first film but he was later cut from it, he is, however, part of the book series of Descendants, where he appears to be on friendly terms with Jay, the son of his parents' enemy, Jafar.

Aladdin's Relationship with Jasmine on the Disney Wiki

The Return of Jafar

Aladdin and the King of Thieves 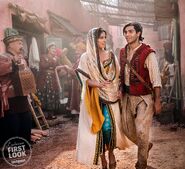 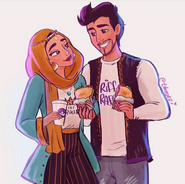 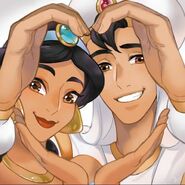 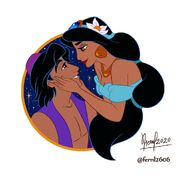