In love, Jason is one with the universe (Soul Squad)
Married (#1)

Janason is the non-binary ship between Jason and Janet from the The Good Place fandom.

Once Jason is able to speak to Eleanor, he tells her about his private room and how Janet has been secretly bring him all asks for. Jason then asks Eleanor if Janet is available or if she's married to Michael. Later, after Janet is accidentally rebooted by Chidi and all her memories and knowledge are gone, Jason treats her very nice and teaches her what jalapeño poppers are because she's the only one who's nice to him. After Tahani finds out that Jason is a fake, he is very worried and down, so Janet gives him hot wings from his favorite restaurant to make him feel better. Jason then asks her to marry him which Janet accepts. After they get married, they can be seen dancing and eating cake together. Later, Jason stops one of their make-out sessions to tell Janet that he doesn't want to keep their love a secret from Michael (whom he thinks is her dad). When Michael finds out that Jason is a fake and married to Janet, Jason tries to explain he'd be good for her. When Michael points out Jason's stupidity in life got him killed, Jason briefly tries to end things with her, but Janet says she doesn't care and that she loves him. When Michael goes to reboot Janet again, they (and Eleanor) escape to The Medium Place and spend their entire time there trying to have sex. When Eleanor tries drag Jason back to the Good Place, Janet informs them that she engaged a "Ride Or Die" protocol, meaning she is loyal only to Jason. When discussing who should go to the Bad Place Jason points out that Chidi murdered Janet and he seems retroactively angry about it. After Eleanor strong arms Jason into agreeing to go to the Bad Place, Jason only asks that Janet come visit him (which would be impossible, but still). When it seems like someone else will take Jason's place, the group debate on who will be going to the Bad place and each time Jason hears a plan that doesn't include him going (which was each one) he cheers "Yes, we get to stay baby we did it" and pulls Janet in and kisses her. When Michael admits that they are really in the Bad Place, he points out that Janet isn't one of the demons and really did fall in love with Jason.

After their memories are reset, Jason and Tahani start a relationship. Janet promises to help them work out their issues but starts glitching out because she is subconsciously still in love with Jason. After Michael informs Janet that she married Jason, she creates Derek as a rebound boyfriend, but she quickly realizes she doesn't love him. After Jason and Tahani learn about Jason's marriage to Janet, Janet wipes Derek's brain and Tahani realizes she was only with Jason because she was emotionally fragile the past few days and she and Jason agree to break things off. When everyone is discussing weather or not they are their best selves and Janet posits that she by definition her best self, Eleanor points out that she still hasn't resolved her feeling about Jason. After Michael and Janet reunite with the rest of Team Cockroach in the judge hall, Janet tells Jason she is in love with him and he tell her that he feels the same way about her. When the humans are sent back to earth, Janet is the one monitoring Jason's point total.

When Michael comes back to the after-life after steering Jason in the direction of the other humans, Janet immediately asks how Jason is and if he's still cute. When they go down to earth to try to stop Trevor from destroying the group, Janet is visibly disturbed by Jason and Tahani drunkenly flirting with each other. After defying the Judge, Michael and Janet return to earth to continue to spy on and help the Soul Squad. When Tahani starts planning on having causal sex with Jason, Janet again look disturbed and Michael makes a plan for Tahani to get with someone else while Janet makes a plan to get Jason some attractive shorts. When trying to keep the group together, Janet slips up twice when trying to say she'll deal with Jason, first calling him sweet-cheeks then referring to his butt. After learning about the after-life again and how their points won't go up Jason and Tahani get married (not for love, but so Jason can share her money) and Janet's voice completely cracks from distress upon hearing this, but she agrees to join the soul squad none the less. Later, Janet builds a virtual simulation machine for Chidi and uses it to spend time with Jason in a steam room. While trying to save Tahani's sister's soul, Jason has some fun with Janet by having her tell him the exact value of the painting in the museum they are at. When Janet is forced to take the soul squad into her void (killing their earth bodies) to save them from the demons, Jason and Tahani explore and discover that Jason and Janet were married in the first version and that she still loves him. After the soul squad escapes to the Good Place's mail room, Tahani (wanting Jason and Janet to both be happy) encourages Jason to talk to Janet about what they saw and does her best to make it clear that her and Jason's marriage is over. Jason and Janet finally get together again while the soul squad is setting up for the new experiment, however Derek has returned, his is memory back, and he is much smarter now. Janet promises Jason that Derek means nothing to her, but Jason still looks confused and worried when Derek helps her create more new people.

Jason is visually uncomfortable as Derek keeps referring to the people he and Janet created as their children. When Derek tells Jason that he is in love with Janet and plans to crush him, Jason reboots him. This almost blows the experiments cover and Janet is cross about it due to the huge work load she has maintaining the new neighborhood. Jason tries to think of a way to make it up to Janet and Michael thankfully convinces Jason that his plan to create more chaos by having the Janet people and himself do a flash mob would not make Janet happier. Jason then had the idea to give her chocolates, but remember she can't eat, so he ate them then called her to describe what they tasted like. Unfortunately when she (seemingly) came, she told Jason that they needed to take a break until the new experiment is completed. Later, after Glenn the demon told tried to tell the squad that Michael had been replaced by Vicky the demon in a Michael suit, Janet (seemingly) accidentally blew Glenn up while using a lie detector on him and when she (seemingly) felt guilty about it, Jason said that if she needs to talk he's here for her. When he can't think of a way to prove that he's the real Michael, Michael decides to sacrifice himself by using the lie detector on himself to save the experiment, but is thankfully stopped when Jason uses magnetic handcuffs to reveal Janet was the one replaced by the Bad Place during the experiment, which Jason was able to figure out due to Bad Janet not using Good Janet's verbal tic (i.e. when some calls Good Janet a robot she will with "not a robot"). The Bad Janet who was impersonating our Janet tells them that our Janet was replaced when the Bad Place was caught cheating, meaning that Janet never broke up with Jason. Jason then makes a plan to go to the Bad Place himself to rescue our Janet and Michael accompanies him. When Jason and Michael arrive in the Bad Place, Jason says that he's worried that, with all the time she spent in the Bad Place, he and Janet may have lost their special connection. At the demon con, Michael and Jason manage to convince Shawn that they are Vicky and Glenn in skin suits. Shawn brings out Janet and Jason tells her that he missed her, that he loves her and he calls her girl which she responds with "not a girl", proving she's the real Janet. When the real Vicky shows up, Jason gives Michael the lie detector/demon exploder that he brought and Micheal uses it to blow up Vicky, allowing them to escape with Janet. On the way to the neighborhood, Janet thanks Jason for saving her and tells him that she missed him.

Janason sailed in the first season after they got married and has remained incredibly popular. Janason an interesting ship due having endured despite Jason getting his memories erased twice after getting together. It is often shipped with Teleanor (Eleanor and Tahani). While it does rival the less popular Jahani (Tahani and Jason) ship, the Good Place fandom has thankfully developed a very civil community. It is both Jason and Janet's biggest ship.

Jason – “Janet, my digital queen. Janet, we can dare to dream. Send nude pics of your heart to me. Jacksonville Jaguars RULE!”
Janet – “ Jason, when I was rebooted, and I lost all my knowledge, I was confused and disoriented, but you were always kind to me. And, according to the central theme of 231,600 songs, movies, poems, and novels that I researched for these vows in the last three seconds, that's what love's all about. ”
— 1.10[1] 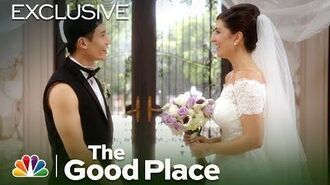 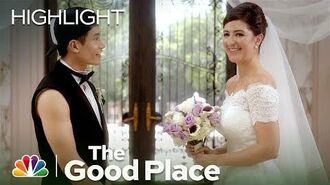 The Good Place - Janet and Jason Get Married! (Episode Highlight) 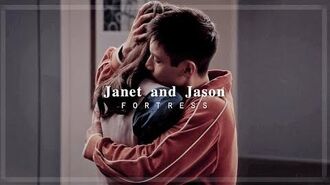 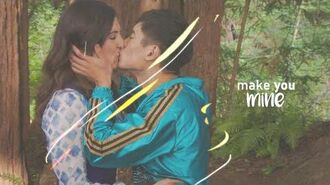 Jason & Janet Make you mine.

Retrieved from "https://shipping.fandom.com/wiki/Janason?oldid=220768"
Community content is available under CC-BY-SA unless otherwise noted.