JayRoy is the slash ship between Jason Todd and Roy Harper from the DC Comics fandom.

The characters first teamed up in 2012 on the pages of Red Hood and the Outlaws, one of the most controversial New 52 titles. All three characters were willing to kill criminals, which made them outcasts in much of the superhero community. Jason's history as a "street kid" (who once tried to steal the tires from the Batmobile) and Roy's history with drug abuse made them a popular "bad boy" pairing.

Red Hood and the Outlaws

In disguise, Roy can't believe that the Kobra leader is making snake puns in his speech. Jason points out that this was his idea, and Roy does say that they need to do more undercover work. They're now the only two people who can stop Kobra, and Jason asks how he was supposed to know that today was the day that they'd launch an attack on Manhattan. Jason says that they'll have to shoot their way through all the goons, but Roy has a better idea. Jason reminds him that all his ideas are bad.

They hid in a broom closet and Jason says that Roy's plan better be good. Roy explains that they can overload the cooling system and shut the whole place down. Jason asks what he needs him to do, and Roy says he needs Jason to kill everyone who walks through the door. Jason is on it. Roy is able to override the system and stop Kobra.

The exit out of the sewers and Roy asks if he did awesome or what. Jason says that there's a third option, but Roy says to take a second to enjoy that they just saved the day. Jason says that they don't have time to celebrate till all of Kobra are dead, when Kobra shows up ready to attack them. Roy says it doesn't seem like a fair fight, and Jason agrees, but Kobra already had the option of leaving.

Roy is on a mission to save a senator, when the senator suddenly shoots the kidnappers. Roy realizes that it's Jason in disguise, and asks if it was necessary. Jason says that it was, but Roy didn't ask for his help. Jason says that he didn't because Roy is stupid and stubborn. The Doctor asks if they know each other, and Jason gets out of his disguise and explains that they used to be partners before Roy struck out on his own. Roy says that he just needed some time to clear his head after ending things with Kori, but Jason says that's why Kori left in the first place. Roy asks how he wasn't supposed to take it personally, but Jason says that he doesn't run around recklessly just because Roy left. Roy isn't sure about that, but Jason asks if Roy is gonna get back in the game. Roy agrees, as Jason opens the back of his truck to reveal the real senator and Roy says that they'll take the ransom money as compensation. The doctor offers them a card if they ever want to go legit, and they leave the two in the desert. Jason says it was nice of them to leave a suitcase for their money, as Roy asks if they could go legit. Jason says no.

Back at the Kobra fight, Jason says that this is why they don't go undercover for a living. Roy says that they won't take every job that comes their way, but being in business together is kinda fun. Jason sarcastically says he's having a blast and calls Roy and idiot.

Jason is taking a shower when Roy comes in and asks if he's got a second. Jason asks if this couldn't wait till after he was done, when he starts to smell napalm. Roy then burns the shower curtain with his flamethrower, much to Jason's shock. Roy's just happy it works, and tells Jason to meet him downstairs, much to Jason's annoyance. Still in a towel, Jason heads to Roy's lab, and says that he needs to live in an apartment and not the mad scientist lab Roy created. Roy then says that they're getting evicted, which Jason can't believe since they made all that money, only to realize that Roy spent all the money on parts. Jason points out that they need to eat, and Roy brings up the offer from Tara Battleworth.

They meet Tara and she says she questions if she needs them since they are literally outlaws. She wants to give them an audition, which pays, and Roy says they'll take it. Both Tara and Jason say they don't know what it is, as they later take a flight. Jason asks if Roy is okay, and Roy asks why wouldn't he be. Jason hates to ask, but wants to know if Roy is drinking again. Roy isn't and says that he's been making progress getting his life together since the last time they talked. Jason says that he wasn't judging, and Roy says that Jason needs to trust him, so he has every right to ask.

“We weren't always best friends. I was angry raised-from-the-dead-boy-bat Jason Todd looking for revenge. He was Roy Harper- self destructive big brain who couldn't get out of his own way long enough to succeed at anything. Somehow, together, as Red Hood and Arsenal, we're better than the sum of out parts.”
— Jason's inner monologue; Red Hood/Arsenal #1

The pairing did exist before Red Hood and the Outlaws was published but it didn't gain popularity until 2012. However, since Dick Grayson switched from Robin to Nightwing when Dick and Roy were both members of the Teen Titans, and it was widely presumed that Roy and Jason had met each other and possibly worked together before Jason's (temporary) death. It is often a side or background pairing rather than the main story. Roy/Jason is also often shipped as part of the Roy Harper/Jason Todd/Starfire OT3. 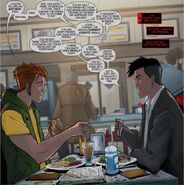 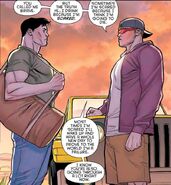 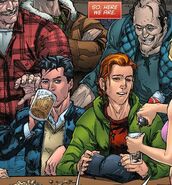 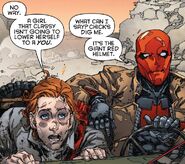 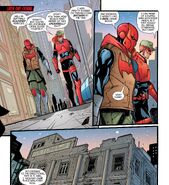 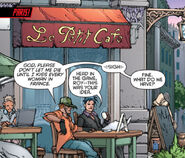 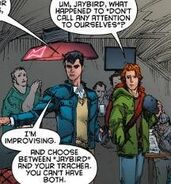