Jeanbara is the family ship between Jean Gunnhildr and Barbara Pegg from the Genshin Impact fandom.

Jean follows her mother's steps while on the other hand, Barbara follows her father's step making them have different last names.

In Barbara's story, in story 3, it was said that Barbara is the complete opposite of her sister. Her sister has always been the very definition of "success" in all aspects, unlike Barbara. Barbara also wanted to surpass her sister at least once. We can of course, assume that Barbara wanted to be like Jean for the family but, she was never to compare.

In act 3 of the Mondstadt Chapter, When Traveler is gonna give back the Holy Lyre Der Himmel, Jean introduces Barbara as the Deaconess of the Church. Barbara says she is not in a position to speak compared to the Acting Grand Master (Jean).

When Traveler came to Jean's office, the Traveler gives her some commissions but Jean seemingly pass out. So the Traveler bring Jean to the Cathedral in search of assistance. When the Traveler asks how Jean is doing to Barbara, Barbara tells the Traveler that it was burnout from work stress and says she'll be fine after a good rest. Barbara thanked the Traveler for bringing her in the Cathedral. Barbara tells that Jean has always been the one to push herself too hard while overlooking her own needs. When Traveler tells Barbara that she really cared about Jean, Barbara seemed embarrassed and says it's not not like this is a personal thing, it was just a out of love for concern for the greater goods. Barbara then tells the Traveler that they should go to the headquarters also saying that Jean will be fine with just her there. Paimon felt that Barbara was trying to get rid of the Traveler and Paimon.

After the Traveler finishing the commissions, the Traveler came back to the Cathedral to ask about Jean's condition. Barbara then tells the Traveler that Jean went to the tree at Windrise also saying that Jean goes there whenever she feels lost and confused deep down inside. Paimon tells Barbara that those were some pretty personal stuff so Paimon asked how did she knew Jean's innermost thoughts. Barbara then got embarrassed and says that Jean mentioned it to her before she left.

In act 4 of the Windblume Festival, in the end of the quest, there was a cutscene at the end and Barbara was seen to holding a picture of her and Jean.

“Barbara is a hard worker, but I feel she's too hard on herself sometimes... What? You ask me how I know all this? It's because the order also manages the Church.”
— Jean's Voiceline about Barbara

“Acting Grand Master... Leader of the Knights of Favonius... Everyone seems to like her a lot. Oh? Me? I... Of course I have nothing but admiration for her!”
— Barbara's Voiceline about Jean

“I wonder when I'll be as tall as my big sister.”
— Barbara 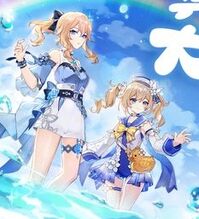 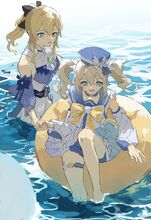 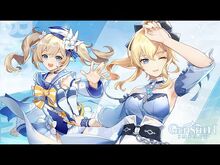