Jeanlisa is the femslash ship between Jean Gunnhildr and Lisa Minci from the Genshin Impact fandom.

You meet them together when you first meet Jean and Lisa in the plot. From that moment on, you will often see them together, as Lisa always advises Jean in magical matters and often acts as her main assistant in difficult situations. In particular, you first get Lisa as a playable character precisely because Jean sends her to help you and Kaeya as a responsible person she trusts.

The same attitude is repeated in the official manga, which also has a scene where Lisa and Jean discuss the situation in the region.

In Lisa's "Good Morning" Voice-Over line, she says good morning to Jean first, then apologizes afterward when she realizes that she's not talking with her. ("*yawns* Good morning, Jean... Oh, it's you ! Sorry, dear.").

In her Voice-Over line about Jean, she compliments Jean about being an amazing leader and she mentions that seeing Jean's hard work makes her want to help her out, ("Jean is a gifted and dedicated leader. Seeing how hard she works makes even me want to help her out.") which is unusual of Lisa since, as seen in her character quest story, she doesn't really like to work and is more of a lazy type of person.

Jean's Story in Story 2 mentions that Lisa once suggested that Jean takes a break and "enjoy some afternoon tea, as is befitting of a lady.".

Jean's Story in "Jean's Daily Schedule - Ver. XVII" mentions that Lisa is Jean's traditional breakfast partner. Given that Jean is an extremely punctual and busy person, it can be assumed that she never misses these events.

Eula's Story 1 mentions that a few hours after Eula made a beeline for Jean's office, Kaeya and Lisa pass by the two guards patrolling it. Kaeya says to them, "The Reconnaissance Captain is back again? When you saw her, was it when she was marching towards Jean's office with her sword in hand, looking like she wanted to kill somebody?" Lisa then says, "Goodness, I must head there straight away. How can they have a tea break without me?" She then hurries to Jean's office. Then, Kaeya, whilst trying to suppress his fit of giggles, explains to the two guards that Jean gives up her time to spar with the Reconnaissance Captain to "preserve the dignity of the Knights of Favonius while also providing a way of settling old grievances." The guards take it that 'tea break' is code for sparring. The story then notes that this happens almost on a monthly basis and the 'sparring ritual' doesn't make much noise for some reason.

In Chapter 4, after Amber flies down with Collei, they find Jean and Lisa having tea together in the middle of the night. Amber finds out that they are investigating the Black Fire incident as well. Jean then introduces Lisa to Amber, to which Lisa says that Jean owed her "a nice cup of lovely sweet tea" for making her do research for 2 days without rest on the incident.

In Chapter 6, Jean later finds out through tattered Fatui research papers that Diluc's father, Crepus, was the previous delusion owner. She then requests for Lisa to go question Diluc about his involvement. Lisa then says, "I don't think I can turn down a request from Jean."

In Chapter 7, Lisa reaches his manor. Diluc says that he doesn't have anything to do with the incident. Lisa then says that after the new evidence they found from the carriage explosion, they think that the same culprit was behind what happened to his father three years ago. Diluc is shocked because it was supposed to be secret and asks if Jean was the one who found out about it, to which Lisa affirms. After that, Diluc reveals to Lisa what happened.

During the Troublesome Work quest, the Traveler finds out that Jean and Lisa occasionally go for tea at the Good Hunter ("She's been here a few times with Master Jean for afternoon tea before."). Later on in the story quest, when it's time to pick a dish that Lisa would like, there is a hidden Easter egg option (Invigorating Pizza) that is only unlocked if you obtained the recipe for Jean's signature dish or have Jean herself. When you pick this dish, Lisa says, "*gasp* It's like you read my mind. Do you have some magical powers you've not been telling me about, Outlander?" After you order the dish, Lisa says, "Wow, Jean must have given you some pointers? Such extraordinary lengths to prepare for a delicious meal... I'd almost say that's cheating. I didn't know you and Jean got on so well. She used to make this for me once in a while too. As it happens, this is exactly what I was craving - the perfect treat after a tiresome day of work. You've outdone yourself."

Later, when it's time to pick a flower for Lisa and you choose to give her a dandelion, she says, "Dandelions? They actually sell dandelions? They have a refreshing scent, similar to the one Jean wears. Thank you."

In Jean's story quest, upon meeting Lisa with Charles, the Traveler asks if she is there for the tax issues. Lisa tells the Traveler that they are right, saying "After I heard about my poor Jean, I thought I might lend a hand with some of her more literary duties". Given that she dislikes overtime or work in general, seeing the mage volunteer to do work for Jean shows how much she cares for the blonde.

During the Windblume festival, both girls go on patrols to keep order at the event. While this is usually Jean's responsibility, Lisa joins her this time for extra help. Some characters even separately note how unusual it is to have a librarian accompany Jean on patrols. Despite this Jean defends her choice in choosing Lisa to accompany her.

In "Missive Cloud and Fog", Kaeya instructs the Traveler to send official documents to the cathedral. When they reach there, they find Jean and Lisa bickering about how Lisa is electrocuting drunkards. At the end of the conversation, Jean tells the Traveller to not worry and that she will keep her eyes on Lisa. To which Lisa teasingly says that if Jean doesn't like it, she can happily refrain.

At the end of the event, Jean and Lisa are seen walking side by side past Marjorie's shop, celebrating how much they enjoyed spending time together again, after which Lisa notes nostalgically that they have not dined together for quite a long time.

Before the characters travel to the Golden Apple Archipelago, Lisa packs a pouch for Jean and gives it to her, telling her to only open it in case of emergencies. Though Kaeya was initially the one in charge of the order and the city, he leaves the job to Lisa. The second day on the island, Traveler and Paimon wake up to find Jean and Barbara in their summer outfits. Paimon notes that Paimon finds it surprising that Jean would pack summer clothes, in which Barbara corrects her, saying that Jean would never pack them herself-as Lisa and Barbara actually picked them out for her. Jean mentions that she was surprised that the pouch contained summer clothes. Paimon then notes that with all the accessories on the outfit, it is definitely Lisa's handiwork.

When you interact with Jean and ask her about how work is with the knights, Jean notes that she is the first to be grateful for that. Thanks to Lisa's presence, she doesn't have to worry about business and plans to give her a gift on her return, glad that she knows what she likes.

“When Lisa is around, I always have peace of mind.”
— Jean's Voiceline about Lisa

“Jean is a gifted and dedicated leader. Seeing how hard she works makes even me want to help her out.”
— Lisa's Voiceline about Jean

“It seems I'm immune to coffee now. Perhaps I need to ask Lisa for something... a little stronger...”
— Jean's Voiceline "Good Evening"

“If only there was some kind of mysterious potion that could keep me awake forever... I need to have a talk with Lisa tomorrow.”
— Jean's Voiceline "Jean's Troubles"

“Work? As long as Lisa's there, I'm not worried. She's more hardworking than anyone once she get's going. Still, I put a lot on her plate this time. I do feel a little guilty...Hmm, I must send her a gift. It's a good thing that I know what she likes.”
— Jean about Lisa

“Jean is very serious about the meaning passed down through this game, so I guess I shouldn't take it too lightly. Let's shoot a few Bouquet Balloons down, and then we can go back and make afternoon tea.”
— Lisa's description in "Balloon Hunter"

Jeanlisa is one of the very first not only femslash, but also ships in general in the franchise. This is also helped by the rather simple logic of the ship, since both girls are pretty close friends and if desired, fans won't have much trouble reading their relationship as potential or outright romantic. In particular, they repeatedly mention each other in voicelines, often refer to each other during various quests, and also often appear in each other's quests or stories.

Many people also love how their opposite personalities fit together. For example, the traditionally lazy and sarcastic Lisa is quick to get serious if Jean needs her help, while Jean, by her own admission, is emotionally relaxed when she is around.

As a fairly logical and popular ship, the Jeanlisa has few rivals, the most famous and popular of which is Jeanluc, which is also the most popular het ship for Jean and Diluc. Since both ships have a fairly dedicated fanbase and appear quite early in the game, mentioning one of them on major resources often creates a certain tension and potential for a ship war. Either way, while many Jeanluc fans prefer to view Jeanlisa as the "obvious" Brotp, many of them still find the ship to be cute. 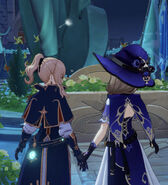 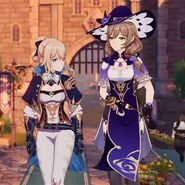 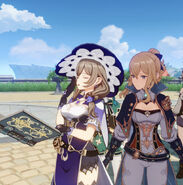 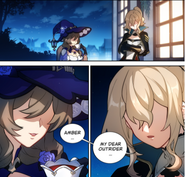 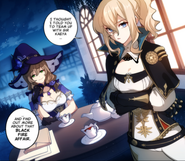 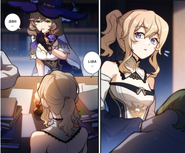 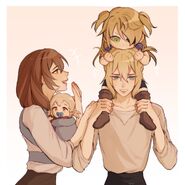 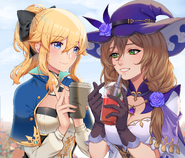