Jeanluc is the het ship between Jean Gunnhildr and Diluc Ragnvindr from the Genshin Impact fandom.

The two knew each other back during Diluc's time as part of the Knights of Favonius, where he was Jean's superior. However, after his father's death, Diluc was infuriated with the Knights due to the way they handled the aftermath of the incident, and so he quit. The whole experience made him very critical of the organization—and though Jean understands why he feels that way and why he harbors such animosity towards them, she expresses her hope that one day she, through her work, will be able to better his view on Knights.

In Act II of the Mondstadt Chapter, Venti and the traveler go to the Angel's Share once it closes down after their plan to steal the Holy Lyre Der Himmel backfires. Upon entering, Venti tells Diluc about the story of why they tried to steal the Holy Lyre. Soon after, Diluc is convinced and says that he'll organize some contacts and tells the Traveller to come back when the tavern is closed.

When they enter the tavern, the two of them see Jean, Diluc and Venti waiting for them. Jean is surprised that the traveler ended up being the one who tried to steal the lyre while the Traveler is surprised about Jean being the person contacted. Diluc then explains to the Traveler that Jean was not the only person he had contacted.

After that, Venti and the traveler explain how Dvalin was poisoned long ago and corrupted by the Abyss upon waking from its slumber, but Diluc thought their story was too farfetched to be believable and told Venti repeat the tale that he'd sung Diluc previously.

Before he can, however, Jean says that won't be necessary and that she believe the two of them—though she says she will only be able to assist in private, due to diplomatic issues associated with the Knights. Diluc scoffs and remarks how that's a reason he doesn't like the Knights--their inneficiency--though he remarks that he's surprised by how quickly Jean believed the traveler, given that they're an outlander. Jean, however, says that even with his own cautious personality, he still trusts them. She calls him "sir," to which he replies he'd already told her not to call him that—but ultimately dismisses it due to the fact that they don't get to work together often anymore. The traveler (unaware of their previous affiliations) questions this, to which they say nothing. Paimon and Venti note the uncomfortable atmosphere.

Later on in the story quest, when the group heads to Starsnatch Cliff to summon Dvalin, the topic of pets is brought up (due to Paimon questioning if the dragon was technically Venti's pet), and Jean mentions that, when she was younger, she had a pet tortoise. Paimon finds it rather odd for Jean to have had a tortoise for a pet, and asks Diluc if he found it strange at all as well. Diluc responds by telling her that he doesn't, as he also had one when he was a child, to which Paimon is shocked.

Diluc and Jean also accompanies the traveler, Paimon and Venti to Stormterror’s Lair, where they fight against Dvalin and managed to purify Dvalin’s corruption.

At the end of Jean's story quest, as she is flustered by everyone's regards, Jean asks her friends how they were able to prepare the party for her at the Angel's Share. Though Kaeya tells her that the key organizer was the traveler, he also admits that they have Diluc to thank for the venue, otherwise they'd be looking at quite an alarming bill. Diluc then says that despite his initial reluctance to sponsor a Knights of Favonius event in any way, he, like any other citizen of Mondstadt, owes Jean his gratitude for her hard work, which is why he went through with the plan.

Jean is touched by his praise and seems to be at loss for words, as she responds, “Master Diluc, I...”. However, she didn’t finish her sentence as she was interrupted by Barbara soon after, telling everyone to stop crowding Jean.

If you talk to Kaeya on the islands the night before the water forcefield on Klee's island is removed, Kaeya will mention to the traveler that part of the reason why he wanted to come to the Golden Apple Archipelago was because he was curious to see both the Acting Grand Master (Jean) and the former Cavalry Captain (Diluc) being in the same place.

In the sixth chapter of the Genshin webcomic, Jean recognizes Diluc's father being the previous owner of a Delusion mentioned in tattered research papers by the Fatui. She then sends Lisa to question Diluc about his involvement in the recent Black Fire incident. Diluc is surprised that Lisa knows about his father's death because it was supposed to be a secret, and concludes that Jean must have told Lisa about it, which she affirms.

“Her unparalleled sense of responsibility is the sole reason why she still hasn't found her true calling.”
— Diluc's voiceline "About Jean: Responsibilities"

“Master Diluc has his reasons for being so critical of the Knights of Favonius. I am not proud of the way things went, but I cannot change the past. All I can do is keep working hard, in the hope he may one day see us in a better light... This is my duty.”
— Jean's voiceline "About Diluc: Dissilusion"

“Master Diluc is my senior, and I have the utmost respect for him. Though we have gone separate ways, I can sense we share the same strong commitment to protecting Mondstadt at all costs.”
— Jean's voiceline "About Diluc: Respect"

“My cautious and meticulous superior, even you trust [them]. Don't you, sir?”
— Jean to Diluc about the traveler

Jeanluc is fairly popular, with the pairing having over 500 works on Archive of Our Own. While ships such as Jeanlisa and KaeLuc have a bigger following, it has retained a rather large fanbase since the game's initial release and has steadily remained one of the most popular shipping options for both Jean and Diluc. Though there is often tension between the ships' communities that can often spark arguments, many fans of this pairing still enjoy the others.

Some people like to joke that Klee is Jean and Diluc's child, as she shares Diluc's red eyes and pyro vision along with Jean's blonde hair.

Being featured together in the CBT2 (closed beta test 2) banner

Jean and Diluc being featured in the first Wanderlust Invocation banner

Jean and Diluc glancing at each other, possibly when they both figured out Venti’s true identity

Jean reveals that Diluc used to be in the Knights, as her superior 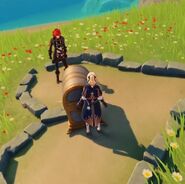 Art by Soc Nau; Fan art reposted by HoYoLAB on their Twitter