“I want you to know, I truly believe that together we are so much better than we are apart. And not in that creepy way. Really, I'm inspired by you. I don't get lost in my own head like I used to.”
— Jessica's wedding vows, New Avengers Annual #1

JessLuke is the het ship between Jessica Jones and Luke Cage from the Marvel and The Defenders fandoms.

Jessica and Luke met while interrupting a crime meeting between the Owl and a mafioso, and they developed a lasting friendship, later having an on-and-off relationship. After Jessica became pregnant with their child, they began a committed relationship. She gave birth to a daughter who they named Danielle, after Luke's best friend Danny Rand. They later married.

After Jessica registered with the Superhuman Registration Act due to a desire to protect Danielle, the two separated. They later got back together. When she briefly took up superheroics again, she took the name Power Woman to honor Luke, whose codename was Power Man.

Jessica often hung around a bar called Luke's, but never went inside. One day, the owner, Luke, invited her inside, and the two flirted with each other. They hooked up, but Jessica left soon after, having discovered a picture of his deceased wife Reva in his bathroom cabinet. Jessica had unwillingly killed Reva while under the mental control of Kilgrave.

Jessica was questioned by the police after Hope Shlottman's arrest, and her apartment was searched. Police found surveillance pictures of Luke's apartment and questioned him at his bar. When he asked her explain why she'd taken the pictures, she lied to him and told him that she'd been hired by the husband of a woman he was hooking up with. Luke didn't believe her, and he told her to stay away from him.

Jessica was later confronted by the woman, who told her that her husband and his friends were on their way to Luke's to attack him. She hurried to the bar to help fight them. The two worked together using their super strength. Luke told her to leave again after the fight was over, saying that it was bad for business. The next night, however, Luke showed up to her apartment, intrigued by the fact that she, too, had super strength. Luke demonstrated his unbreakable skin, and the two then had sex again, later discussing their respective abilities. However, after Kilgrave turned up alive, Jessica broke off the burgeoning relationship, afraid that something would happen to him and guilty over what she'd done to Reva.

Luke came to her apartment again a few days later, looking to hire Jessica to help him find a boy named Antoine Grier. She initially declined, but reluctantly accepted the case. The next day, she and Luke met at Antoine's apartment and searched for evidence as to where he'd gone. Back at Jessica's apartment, Luke, having learned about her past with Kilgrave from Malcolm Ducasse, asked if there was any way he could fix their break-up. Jessica told him it wasn't his fault, and they got back together and had sex. The next morning, Luke told her that the reason he was searching for Antoine was because his sister, Serena, had promised him information about the person responsible for Reva's death. Jessica became frantic, and decided that she had to intercept the information.

After finding the warehouse where Antoine had disappeared to, they retrieved him, only to be intercepted by Len Sirkes, the loan shark who Antoine owed money to. Luke fought off his men while Jessica dragged Antoine out and back to his sister's house. Jessica tried to convince Serena to give her the information, but Luke arrived before she could. Serena handed the file to him, and after reading that a bus driver had driven drunk and ran over Reva, set out to kill him in revenge. Jessica ran to stop him, and eventually found him about to kill the driver. She told Luke the truth, and Luke, disgusted with the fact that he'd been with his wife's killer, called her a piece of shit and left.

Afterwards, he found Kilgrave and tried to kill him, but Kilgrave instead used his enhanced mental control to force Luke to reconcile with her. When Jessica and Luke went to the hall where Kilgrave had been practicing with his newly enhanced abilities, Kilgrave revealed his trickery and forced Luke to try to kill Jessica. Left with no other choice, Jessica shot Luke in the head with a shotgun, knocking him out. He was then rushed to Metro-General Hospital, where Jessica met Claire Temple. Jessica convinced Claire to help her take him back to her apartment. Claire used her medical expertise to save Luke's life.

Luke awoke hours after Jessica killed Kilgrave and tried to get up to prevent her arrest, but Claire talked him down, as it would only result in his own arrest. He then left the apartment,

Jessica and Luke saw each other for the first time since dealing with Kilgrave during a fight at Midland Circle against Hand ninjas. They fought alongside each other, and along with Danny Rand and Matt Murdock, escaped to the Royal Dragon restaurant. They briefly spoke with each other. Jessica left when Danny suggested they form a team. Luke tried to convince her to stay, but ultimately let her go. Nevertheless, Jessica returned in time to help fight off an attack by the Hand.

The four of them continued to work together to foil the Hand's destruction of New York City. After the final battle against the Hand, Luke found Jessica at a bar and told her to keep in touch with him.

In the Comics Jessica and Luke have a daughter named Danielle. She is named after Luke’s best friend Danny Rand. Danielle is mentioned in the Marvel’s Avengers LEGO Game in the Solo Jessica Jones "Jewel" Mission.

“You are a hard-drinking, short-fused, mess of a woman, but you are not a piece of shit.”
— Luke, Jessica Jones 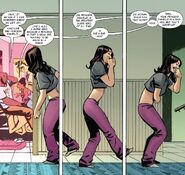 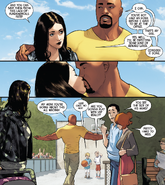 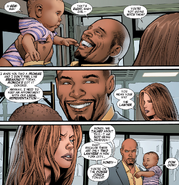 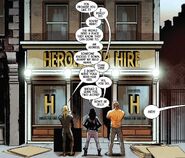 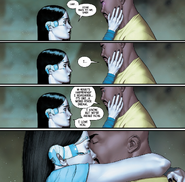