Jetave is the het ship between Jet and Wave from the Sonic the Hedgehog fandom.

Jet and Wave are both members of the Babylon Rogues along with Storm the Albatross in every canon where the two appear. As such, Jet and Wave usually appear together.

During their career as the Babylon Rogues, the three were involved in numerous criminal activities. They also became skilled in Extreme Gear racing. Wave was the mechanic of the team, making the Extreme Gear for the team. Jet especially was a skilled user of this gear and he achieved the title of "Legendary Wind Master".

In Sonic Riders, Wave and Storm found Eggman arriving to their airship with a proposition to Jet. Wave and Storm brought Eggman to Jet's office, where Eggman explained that the Key to Babylon Garden, which was in Jet's possession at the moment, could reveal the location if he collected the seven Chaos Emeralds. Wanting to collect the treasure in it, Jet agreed to work with Eggman.

As their plan, Eggman hosted the EX World Grand Prix, an Extreme Gear racing event where the entry fee was one Chaos Emerald, and the winner got to claim all seven. All the Babylon Rogues had to do was to win the event. The team went to Future City, where they successfully stole a Chaos Emerald, which they used as an entry fee.

During the event, Wave and Storm were arguing in the headquarters until Jet told them that he was suspicious of Eggman's true motives. He sent Storm to look for anything suspicious Eggman was hiding. Jet and Wave waited for his return in Green Cave. While Jet was relaxed, Wave began lecturing him on his responsibilities.

The two later met up with Storm at Sand Ruins. Storm brought Eggman's diary, which revealed that the treasure in Babylon Garden was actually not a gem like Eggman had them believe, but rather advanced technology which Eggman hoped to use for world domination. Having no interest in technology, Jet tried to leave, but Wave convinced him to stay, stating the technology could still be valuable.

The final round of the EX Grand World Prix was between Jet and Sonic. Sonic almost won the race, but Wave had planted a bomb under his gear, allowing Jet to win the race. However, Eggman stole the Key and went after the treasure, which got Jet, Wave and others present to chase after him.

Sonic caught Eggman first, much to Jet's disappointment. Jet was too proud to accept the Key from Sonic, as he saw it as an act of pity, but Wave took it on the behalf of the Babylon Rogues. She opened the garden, accidentally awakening the Babylon Guardian. The Babylon Rogues, Sonic, Tails, Knuckles and Amy defeated the guardian and found the Treasure of Babylon, which was a magic carpet instead of technology.

A few months later, during the events of Sonic Riders: Zero Gravity, the Babylon Rogues were attempting to find an |Ark of Cosmos, an engine unit for Babylon Garden, in Gigan Rocks. Jet managed to successfully take the item. After this, a shooting star appeared. Jet wished for the ability to be faster than Sonic. Wave also attempted to make a wish but was ridiculed by Storm. At that moment, meteors fell down, activating a trap and causing boulders to drop on them. The team was saved by the Ark of the Cosmos.

After returning to their airship, Wave analyzed the Ark of Cosmos and told Jet about what she had found out. She told Jet there were a total of five of them. Wave was about to build a radar to find the rest of them when Storm informed the two that SCR-GP had stolen an Ark of Cosmos from the Megalo City Museum. The three went to Megalo Stadium to retrieve it.

Jet caught the robot in Monopole, while Wave and Storm followed closely behind. Jet was about to get the Ark of Cosmos, but lost track of it. He soon noticed it was taken by Sonic, Tails, Knuckles and Amy, and started raging, and was soon joined by Wave and Storm. They heard Sonic and his friends were planning to go to MeteorTech, which lead to the Babylon Rogues going there as well. At MeteorTech, Wave helped Jet repel security robots. the three soon encountered Sonic and his friends again, and Jet ordered Amy to give him the Ark of Cosmos. As more security robots arrived, Sonic's group left, Jet and Wave chasing after them.

After getting into the control room, they found out Eggman owned MeteorTech. The doctor revealed that the mother computer had an Ark of Cosmos in it, and that he had sent robots to look for the rest of them. Jet remembered Amy had one, but soon noticed she and Storm weren't there. The remaining group looked at a screen and saw SCR-HD and Storm chasing Amy.

Jet and Wave returned to their airship, where Wave worked on deciphering ancient Babylonian texts. Storm soon returned with two Arks of Cosmos. Wave told the other two that she had discovered that the Arks of Cosmos had almost caused a "lightless black", but Jet had little interest in it. The team soon noticed that the two Arks of Cosmos had been stolen by Eggman, who planned to use them to take over the world by controlling all of the world's robots. Wasting no time, the Babylon Rogues went after Eggman.

The Babylon Rogues went to Crimson Tower, where Wave explained what the tower was. There, Jet and his team encountered Sonic and his friends. Jet challenged Sonic to a race, and whoever won got to have the title of fastest thing alive and the possession of the Ark of Cosmos. The race ended in a draw, as Jet and Sonic caught Eggman at the same time.

Shortly after Eggman had been caught, the Babylon Garden appeared due to the Arks of Cosmos being present. Sonic handed over his Arks of Cosmos, which Jet accused of being a sign of running away from their race. Wave prepared to head to the Babylon Garden with her team, but they were attacked by SCR-HD, who stole all five Arks of Cosmos and took them to the Babylon Garden. This transformed it into Astral Babylon, forming a black hole, the "lightless black" Wave had read about earlier, which would consume the planet. Wave, Jet and the others present head to Astral Babylon. There, they faced Master Core: ABIS and saved the world. After the battle, Jet told Wave he was content on staying on Earth despite his alien ancestry.

In Sonic Free Riders, a World Grand Prix was held by Dr. Eggman in disguise, this time having competitors in teams of 3. The Babylon Rogues were one of these teams. Before the first race, the team was interviewed by Omochao. Wave wanted to get the cash prize as soon as possible, and she and Jet agreed that they should feel pity for their first opponent.

Their first opponents were Team Dark, consisting of Shadow the Hedgehog, Rouge the Bat and E-10000B. During this race, Wave defended Jet from Rouge. For the second race, they faced Team Rose, and after the Babylon Rogues won, both Jet and Wave taunted the opposing team, Wave specifically targeting Vector.

For the final race, the Babylon Rogues faced Team Heroes, a team consisting of Sonic, Tails and Knuckles. Jet's only interest was beating Sonic. Before the race, Wave secretly sabotaged the opponents' extreme gear without Jet knowing. She assured Jet the Babylon Rogues would win, which made Jet suspect Wave. After the Babylon Rogues won, Jet was happy about the victory at first, but after hearing Sonic's team had technical difficulties with their Extreme Gear, Jet accused Wave of sabotaging the opponents. Wave denied this. Jet wanted a rematch with Sonic, which he won, and Wave praised Jet for his victory.

After multiple races of Team Babylon both winning and losing, the three came to collect their prizes. However, Eggman made all teams face the ultimate Gear-Jockey robot, which the participants managed to beat. It was soon revealed that Eggman was actually scanning the racers' racing data the whole time using his E-10000 robots in order to create the ultimate Extreme Gear. Eggman then challenged Jet, Wave and the others in a race but lost. They, however, soon discovered that E-10000B was actually Metal Sonic in disguise and had given Eggman false data. Metal Sonic challenged Sonic in a race while Jet, Wave and the others watched.

After Metal Sonic's defeat, it was revealed all prizes were fake. This greatly upset Wave, who thought this would ruin the Babylon Rogues' reputation. Jet, however, remained calm, as he had a good time.

In the Pre-Super Genesis Wave universe, Jet and Wave were originally members of the Battle Bird Armada, but both did something that caused them to end up in their prison. The two and Storm met in imprisonment, and they escaped after Jet set them free. The three decided to team up and find the Babylon Garden before the Battle Bird Armada could.

The three were later involved in a battle for a Sol Emerald. Their opponents fighting for it were Team Dark, Team Rose (Amy, Cream, and Blaze) and Team Hooligan (Nack, Bean, and Bark). In the end, Team Babylon failed to get the Emerald, as Blaze was able to get it and took it back to her homeworld where it belonged.

In the Post-Super Genesis Wave, their story is roughly the same as in the games. At some point, they had an encounter with Blaze and the Hooligans.

Jetave is the most common ship for both characters, as they have mostly appeared together in the Sonic Riders series. It, however, is rarely a main ship, but rather a side ship shipped alongside pairings that involve more major characters. As Jet and Wave were introduced in the same game, the pairing did not caused conflict with any pre-existing ships. 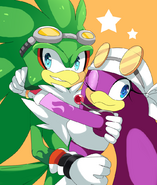 Babylon Rogues - the friendship with Storm the Albatross

Retrieved from "https://shipping.fandom.com/wiki/Jetave?oldid=235773"
Community content is available under CC-BY-SA unless otherwise noted.