Shipping Wiki
Register
Don't have an account?
Sign In
in: Ships, Ships/Het, Your Turn To Die/Ships,
and 5 more

Implied crush on Sara's side (Manga)

Joesara is the het ship between Sara Chidouin and Joe Tazuna from the Your Turn To Die fandom.

At the start of the game, Joe comes back to their school to see Sara as she is leaving. He claims his intention was to brag about his date earlier, and walks home with Sara. When walking together, Joe asks if she wants to hold hands, and expresses his concern for Sara's well-being due to her "stalker".

When questioned as to whether that's why he walks home with Sara, he is caught off guard and states "D...Dummy... I just wanted to brag..." When Sara enters the house and finds her mother collapsed, Joe appears again, telling Sara to stay calm and asks if she's called for any help.

When exploring, Joe playfully teases Sara about her height, saying a painting on the wall is "just barely out of [her] reach." Sara states that she grew a centimeter, and jokes that she'll grow taller than him. He then tells Shin Tsukimi to keep watch of Sara for him. After some of the participants are locked in the Blue Room, Joe comes up to Sara to ask if she is hurt. When told the rules of the Russian Roulette game, he asks if the challenger will be safe, and after being told yes, he asks if Sara will be the challenger and seems happy to be a target as long as it is definite that she survives. He also encourages her to show that she's worth trusting, telling her to ask him if she's not sure, and that they can "stress about it together."

After Russian Roulette, Joe offers to search with Sara as Shin had disappeared. He also offers for Sara his shoulder for her to rest on and relax, when she tells him that she was feeling drained from Russian Roulette. It is evident that Joe cares a lot about Sara's mental and physical wellbeing.

In the second part of Chapter 1, Joe shares his doubts about Keiji Shinogi and asks Sara her opinion on him, the conversation ending with her agreeing to look into it and Joe telling her not to push herself too much. For most of the investigation they take separate paths, though they see each other again before the main game and talk about Ryoko Hirose and Joe's date. He says they got on to talking about Sara a lot on the date.

Joe isn't a major force at the start of the main game, but still mostly attempts to support and encourage Sara, as well as making observations to back up her points ("The blackboard in the bar..."). In the final round, under the impression that he's the sage, Sara wrestles with herself as to whether she should confess this or not. Pressured by everyone else, Joe claims that Sara is the Keymaster. When his true card is revealed, he apologizes to the group, then directly to Sara for tricking her. Some of his last words are "I love ya, Sara! You're my best friend!"

Sara seems shocked and in disbelief, begging to die in Joe's place. She is wracked with heavy guilt and hallucinations throughout the second chapter, showing that she cared deeply for Joe.

In chapter 2 while investigating the passageway in the rubble room, Keiji asks Sara if she *liked* Joe, which she can give a number of responses to. It is evident that she really cares for Joe and misses him.

In Chapter 3 Part 1-B, Midori reveals to Sara that Joe was the only reason she was involved in the death game.

At the end of Chapter 2 Part 2, your vote determines who dies. Your options are Nao Egokoro, Kanna Kizuchi, and Shin.

If you choose to vote for Kanna, Sara loses all memory of Joe due to trauma caused by a fake AI of him.

However, if you vote for Shin, Shin realizes Sara isn't a bad person and uses his final moments to launch the real Joe AI, who comforts Sara and tells her that he will always trust her decisions. He reflects on their friendship, and all the happy memories they shared before the death game. He also repeats what were some of his last words. ("I love ya, Sara...")

If you vote for Nao, nothing related to Joe occurs.

In the official manga, It can be implied that Sara holds a small crush or secret admiration for Joe, as she silently states her jealousy towards Ryoko when Joe walks her home, and when she states what she believed would be her last words in the First Trial ("Joe, you know I..."). In the fourth chapter in the manga, Shin mistakes the two as lovers, much to Sara's embarrassment.

Joesara has a lot of popularity among fans, likely due to the two already being close as well as the fact that as the protagonist, Sara's thoughts and feelings towards Joe are shown to the player.

The ship mainly sailed due to the two being so close and because of some popular/cute tropes that they fit into- ex. a more serious character x a wild, fun character.

Some people in the fandom see this as more of a close friendship or an unrequited love on Sara's side, considering that Joe canonically is dating Ryoko Hirose as he states multiple times in media such as the 4komas and Twitter sketches, and as the two of them went on their first date together before the start of the game. 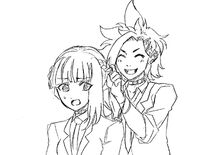 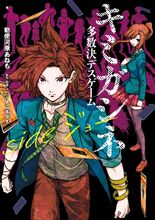