• Face of the Band — when Josie was with the Pussycats

Josie McCoy is a principal character from the Riverdale and Katy Keene fandoms.

Josie is an ambitious, talented musician who heads Josie & The Pussycats with her best friends Melody and Val, aiming to become a famous star. Her father's constant disapproval and separation from her life can sometimes give Josie tunnel vision in her quest to succeed as a means of finally winning her negligent father's affection. Josie is a beautiful, confident woman, but also vulnerable in a way most people don't get to see, because of her family life. Her mother's an attorney and the former mayor of Riverdale, where she endured racist threats, a trauma that informs Josie's awareness of the injustice she may face in her life. Regardless, Josie fiercely forges ahead, unwavering in her endeavour to fulfil her dreams.

The Pussycats — the ship between Josie, Valerie Brown and Melody Valentine

When Josie arrives in New York, she has an impromptu duet session with a street performer, and is approached by Alex. Despite thinking it's a hoax, she learns from her new roomies that he's Alexander Cabot, a wealthy heir from an infamous New York family. Josie records music with him and they start a fling, though his family drama comes between them. Josie insists her music comes first and she doesn't want a relationship, but she can't fight her attraction to Alex. When Alex's father offers Josie a contract on the condition that she "keep an eye on Alex", Josie's drawn more and more into the weirdness of the Cabot family power struggles, which also includes Alex's stepsister, Xandra, who also happens to be a high school ex-girlfriend.

As a favour to Cheryl, Josie allows Archie to sit in on the Pussycats' rehearsals, although she's skeptical of him. He gets to offer a suggestion when they're stumped writing songs at one point and he and Josie get along a little better. Archie and Josie attend a dinner with their parents, where Archie gets a little more insight into Josie's motivations and background. They sing together at a the town jubilee at the end of the first semester. In their junior year, Josie comes to Archie's aide when he's spiralling following his brushes with death and while fugitive. Archie feels inspired by Josie to dive back in to music and they start playing together again. Archie is there for Josie as she applies to Julliard. One thing leads to another and they kiss. They start dating and have fun, until Archie wants a more serious commitment from Josie. She's hesitant but agrees, after which Archie almost kisses Veronica. Josie never knows this, but make plans to leave town to go on tour with her Dad. She and Archie part amicably.

After sophomore year, Josie and Sweet Pea start hooking up and spend the summer before their junior year together. At the last party before school starts, Josie re-affirms her commitment to only her music, telling Sweet Pea that their summer fling was just that. They seem to still get along fine around each other during the year, until Josie comes around Sweet Pea's and asks a favour. It turns out that they've been hooking up occasionally since summer and Sweet Pea has feelings for Josie. He says he doesn't want to have this meaningless fling with her and she gets the message, leaving it at that. When Josie starts seeing Archie and Sweet Pea finds out, he's hurt and spills the beans to everyone during theatre rehearsals. Josie feels like her privacy's been violated by Sweet Pea, and they don't really seem to talk much after that.

During the second semester of their sophomore year, Josie and Reggie hook up while on drugs and start a fling. Reggie moreso pursues Josie, which she seems to enjoy, and they also become running mates for Student Body President. At the end of their sophomore year, they drop out of the race, but still appear to be together. However, they break up off-screen before summer starts.

Following Chuck' misogynist behaviour, Josie doesn't hold him in high regard. When he asks her out, she vehemently rejects him on the grounds of his prior behaviour. One night, Josie's practicing alone at school and gets spooked walking the halls, when she bumps into Chuck. He offers her a ride on the condition that they stop at Pop's and Josie accepts. Once there, Josie playfully curtails any intent for this to become a date and Chuck tells her how he's making an effort to change after what he did. Josie's hesitant but starts to see that he's genuine. Chuck asks Josie for an impromptu dance at Pop's and she accepts. They're interrupted by Mayor McCoy who tells Chuck off and brings Josie home. Chuck is later framed by Cheryl as Josie's stalker, although it is actually Cheryl herself. Chuck gets harassed by the police as a result and Cheryl never faces any consequences, nor does Josie, who lies that she thinks Chuck is the culprit, although she knows he's changed. They later work on the school musical together, but Josie and Chuck are never seen talking again or making up. 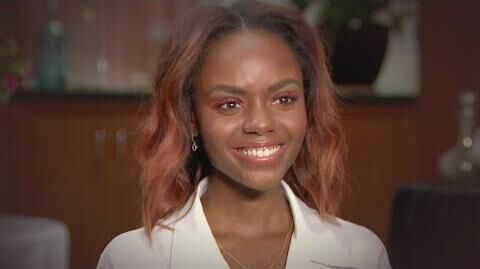 Retrieved from "https://shipping.fandom.com/wiki/Josie_McCoy?oldid=242722"
Community content is available under CC-BY-SA unless otherwise noted.