JourneyShipping is the slash ship between Ash and Goh from the Pokémon fandom.

Most notable about their relationship is how often Goh blushes and praises Ash in the first three episodes of Pokémon Journeys. The two met when they both got on the legendary Pokémon Lugia’s back, and after that bonding experience Goh accepts Ash as his friend.

At Professor Cerise’s laboratory, the pair is appointed as his research fellows, to which Goh, while blushing, asks Ash if he would be his friend. Only for Ash to cut him off asking if they were already friends. Goh blushes, but he quickly agrees. They start laughing together and then suddenly get scared by Yamper, which makes the two boys hug each other in panic. Noticeably, when Goh first gets scared the common scared face shadow appears, wiping away any blush but when they hug, the blush returns. The animators could have easily removed the blush yet they decided to keep it.

When Ash was battling in front of Goh, he was in awe and had what some would describe as a love-struck expression.

In episode 16, when Ash runs off to find Gengar, Goh says out loud, “That’s so you Ash!” while Scorbunny gives him a smug look. A blushing and stuttering Goh brushes it off by saying he was only thinking of catching Gengar, while denying that he was thinking about Ash. He also says “It’s not like I want to help Ash or anything!”, which is a common expression said by tsundere characters.

Another noticeable thing about their relationship is how Ash is often quick to help Goh as seen in “Kicking It from Here Into Tomorrow!”, where Ash runs over to help Goh when Team Rocket decide to attack Goh for discovering where their secret base is.

In Episode 23, Goh tells Ash to not get distracted.

During and after Goh’s battle against Flygon in episode 36, Ash is stunned and awestruck the entire time. Goh states that his battling style was inspired by Ash, which results in Ash staring at him then giggling. He flops onto the sand and says “I sure am stupid” while smiling.

In episode 38, Ash immediately jumps onto Goh to protect him from Aerodactyl and stays still until Goh gets up himself. In future episodes, Ash continues to protect and help Goh. An example is on Cello Island when Goh ties a string shot initiated by his Caterpie to a tree for him and Ash to climb across the bog with. Goh is attacked by a Kingler and falls, but Ash immediately grabs onto him. While they are on Cello Island, a Gyarados appears as they attempt to cross a river. Ash’s Pikachu uses Electroweb to temporarily trap it, and Ash holds onto Goh’s hand to help him get across, but he does not let go until the Gyarados breaks free and sends them both flying and then landing into the river.

As Goh struggles to battle Zapdos in episode 40, Ash arrives in time to take part in the battle but hesitates as he sees Goh’s worried facial expression. He decides that Goh should try to keep going without his help. Ash says “Your battle isn’t over yet, right Goh?” which causes Goh to blush, his eyes to shine and his face to soften.

During episode 43, Ash stays in Rose Tower for the night while Goh stays in Magnolia’s lab with Sonia. Ash leaps onto the bed he was lent to sleep in overnight and one of the first things that comes to his mind is the fact that Goh is not there with him. Right after Ash wishes Goh could be there with him, Goh calls him on his Rotom phone.

At the end of episode 46, Ash and Goh surprisingly end back up at Professor Sakuragi’s laboratory after their battle against Mewtwo on Cello Island. Ash states that he hopes to meet Mewtwo again, and Goh replies, reassuring him that they would since the future lies in his hands, to which Ash responds with “Our hands, right?” while reaching his right arm outwards on top of Goh’s left arm.

At the start of episode 49, as Chloe and Goh are about to leave for school, Ash tells Goh he looks good in his school uniform. Goh blushes, smugly responding with “Yeah, I look good in everything, you know!”

In episode 53, one of the Pokémon Hunter’s Houndoom attempts to attack Ash, Goh and Cinderace. Goh pushes Ash out of the way and Ash is shown to be very surprised. Earlier on in the episode, while Ash and Goh are separated, Ash openly worries about Goh and hopes that he’s okay.

In episode 58, Ash and Goh were holding hands because a Gulpin was stuck to Goh’s face and could not see, while they were holding hands, Goh says that he feels embarrassed holding Ash’s hand and seems to want to avoid looking at Ash. You can also see that even when they were getting stampeded by the Gulpin, they were still holding hands.

It is the newest ship of the Pokémon Journeys anime. Although it has not yet been finished, people have already speculated that Goh is homosexual, as his androgynous and feminine manners along with his seemed attraction to Ash proves. This is further moment was in Episode 2, when Goh is on Lugia’s back with Ash he is in awe of the waterfall, and the reflection of a rainbow is seen in his eyes. 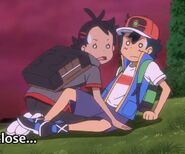 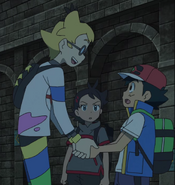 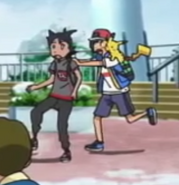 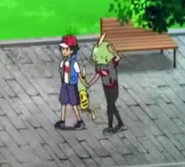 Ash x Gou I Do Adore