Juleka and Rose are best friends who are hardly apart from each other, as they often hang out together during breaks, between classes and on non-school days. Rose's kind, caring nature has her looking out for Juleka whenever she needs help and support.

The two are established to be close friends early on in the series, creating a derby hat together in "Mr. Pigeon", and are seen several times in the background hanging out together, and often hide together when akumas attack near where their class is. As Rose watches a new report of Prince Ali arriving in Paris while crying, in "Princess Fragrance", Juleka hands her friend tissues to dry her eyes and blow her nose on. When picture day came in "Reflekta", Rose reassured Juleka that she isn't cursed. Juleka then gets locked in the bathroom by Sabrina, and Rose immediately leaves to find her, letting her out and comforting her once she realized she had once again missed pictures, proving her curse to her.

On the day of the music festival in "Captain Hardrock", Rose and Juleka are shown to be in a band called Kitty Section, where Rose sings and Juleka plays guitar with her older brother, Luka, while Ivan severs as their drummer. When the titled villain attacks, the two girls were chained up together until Ladybug comes to their and the others rescue.

In "Zombizou", Rose and Juleka are seen talking about the presents they are each giving to their teacher for her birthday. After the two escaped the Zombizou populated school by bus, Juleka comforts Rose while letting her friend sit on her lap, before the purple kiss mark on Rose's leg took control of her and kissed Juleka on the lips. In which places Juleka under the title villain's control, as well. After Zombizou's controlling hold was lifted from her many victims the two girls hug each other.

In "Reverser", the two are shown to be part of the school's art club, with a few of their fellow creative classmates, where Rose writes the songs for their band.

In "Frozer", Rose and Juleka are seen togheter by Adrien along with other couples like Alyno and Myvan.

In "Reflekdoll" Rose compliments Juleka on her hair and wanted to stay with her at Marinette's house before Juleka insisted she go, she also kisses her in the cheek. After getting akumatized, Juleka as Reflekta is seen looking for Rose, wanting to turn her into her replica, saying that they would be like twin sisters forever and ever.

In "Desperada" when Juleka is about to get hit by the villain, Rose tries to protect Juleka by standing in her way.

In "Felix" Rose and Juleka were holding hands right before they got Felix's response, this response causes Juleka and Rose are akumatized into Reflekta and Princess Fragrance, the two are seen haunting Félix along with Lady Wifi and have a brief fight scene against Nathalie, the two are also seen togheter aproaching Ladybug and Chat Noir to get Félix.

In "Miracle Queen" Rose and Juleka are seen togheter with the other couples.

In "Truth" when Rose is about to get hit by the villain, Juleka stands in her way to protect her, geting hit instead, similiar to when Rose tried to protect her in "Desperada".

In "Queen Banana" and "Mega Leech" the two are seen holding hands.

In "Guiltrip", we learn that Rose has been suffering from a chronic illness since she was little. However, she is capable of handling it, but Juleka is still worried about her. She breaks down and eventually lets slip to the whole class. When Rose comes back from the hospital, everyone starts treating her differently. The guilt of exposing Rose's secret causes Juleka to be reakumatized into Reflekta, with Shadow Moth giving her the powerful sentimonster Guiltrip. However, Reflekta has no desire to fight, her guilt having consumed her; she gives up control over Guiltrip, granting it free will, and allowing it to imprison her in its void. After the whole class are absorbed into the abyss, Ladybug and Cat Noir enter it to fight the sentimonster, but its power over negative emotions completely overwhelms them both. It is only through Rose's happy demeanor that they are saved, so Ladybug decides to give Rose the Pig Miraculous with the power of Jubilation to save Juleka. Rose becomes the heroine Pigella, and the group finds the despondent Reflekta. Pigella uses her power, Gift, to show her her heart's desire: a normal day in class with Rose and everyone else. This cheers Reflekta up, freeing her from Guiltrip, and the heroes turn her back into Juleka. After Guiltrip is defeated, Rose returns her Miraculous and comforts Juleka.

In "Crocoduel", Rose is one of the guests at Luka and Juleka's party.

Julerose is a popular femslash ship that continues to grow within the Miraculous Ladybug fandom, due to hints that indicates that Juleka and Rose are girlfriends. Thus has recently been confirmed to be true by in tweet by Thomas Astruc, the creator of Miraculous.

In translation the creator says "if you see like that, it's pretty much obvious isn't it?" Confirming the two are in fact a couple.

The season two and three opening shows Rose with pig phone stickers on her face while Juleka has a tiger's fang, and since many of the new miraculous in the series are people who are friend with Marinette and Adrien, as well as some of them being their fellow classmates, fans have began to theories that the two girls would one day be entrusted with the Pig and Tiger Miraculouses. Since Alya, Nino, Chloé, Luka and Kagami were given theirs when a family member or friend of theirs were akumatized or have been captured by one, there is a chance that Rose and Juleka might be given theirs when either one of them is in danger and Ladybug needs one of their help to save the other, by lending either one of them a Miraculous.

On AO3, the ship has over 1235 fanfics, while fanfiction.net has 67 with only 28 fanfics on the two in its Miraculous Ladybug category. The ship also has a large support on both Deviantart and Tumblr. 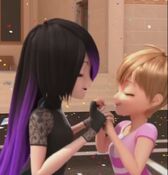 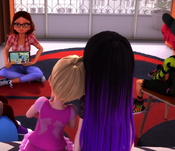 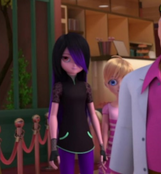 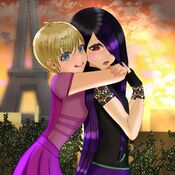