Kacchako is the het ship between Katsuki Bakugou and Ochako Uraraka from the My Hero Academia fandom.

During the first of the quirk tests, a measured ball throwing, Uraraka throws at a distance of infinity, thanks to her Zero Gravity. Bakugou reacts surprisedly at this, as seen in the full class reaction.

“But they make me laugh!”
— Uraraka Ochako to Yaoyozoru Momo & Bakugou Katsuki

There is a minor interaction in manga Ch 13, on the bus ride to the USJ. Momo calls Bakugou’s conversation vulgar with a look of disdain on her face. But Uraraka states, "But it makes me laugh!," with a genuine laugh and smile on her face in reference to a classmate saying, "Bakugou, you are one foul mouthed guy." In the anime version, she says, "But I like this stuff!"

Bakugou and Uraraka are the only two students to conclude that Kurogiri is vulnerable beneath the mist of his quirk.

Bakugou and Uraraka’s first major interaction is in the Sports Festival Arc, during their match in the tournament bracket. Bakugou, states that he doesn’t remember everyone’s quirks to his classmates before the Cavalry Battle, but at the start of his match with Uraraka, he states, “You’re the one that can make things float.”

At the beginning of the match, Bakugou refers to Uraraka by the nickname “Round Face”, as he does with all people and classmates. He also refers to her as “Pink Cheeks” in the English dub of the anime. Saying, “You’re the one who screws around with gravity, right Pink Cheeks?”[1]

He battles Uraraka just as seriously as he does his other opponents, using his explosions to keep her away from him, rather than going in for close-quarters combat.

During the match, Bakugou is booed by the crowd for “toying” with Uraraka, as they perceive it, and Aizawa steps in to put words to Bakugou’s actions. He states that Bakugou is fighting the way he is because he is taking her seriously and that anyone who disagrees needs to quit being a hero if they think Bakugou should go easy on her because of her gender.

The crowd is not aware that the entire match was a part of her plan, and Bakugou is surprised by her words thanking him for not dropping his guard.'

She is the first opponent to push him to his physical limit. To which he responds with a genuine smile, and shout for the real match to begin as he calls out her surname; his sign of respect. Bakugou is also surprised when she falls, unlike with the opponents from his other matches (save for Todoroki), and watches thoughtfully as she is carried away to Recovery Girl.

After the match, Bakugou returns to the stands, and Kaminari remarks that he can’t believe Bakugou would fight such a weak and defenseless girl, to which Bakugou responds without looking at anyone, “Nothing frail about her,” in the manga translation, and “I wouldn’t call that girl frail,” in the US dub.

In the manga, after the match, when he meets Deku near the practice rooms, he accuses Deku of being the mastermind of, “that plan that had her fling herself so dangerously.” Showing concern where he has not previously shown any for other classmates before.

Additionally, during his match with Todoroki, Bakugou complains about people who, “make light of their opponents” and continues to say that, “If you haven't got the intent to win, then don’t stand before me,” as the frame sits on Uraraka, which provides extra insight into his fight with Uraraka, and signifies that he sees her as someone worthy.

Bakugou is a source of inspiration for Uraraka. After the Sports Fest, before the students choose an internship, Uraraka remarks how “It hit me after my match with Bakugou-kun...how many more possibilities would open up to me if I were stronger.”

In Ch 60, Uraraka was the first to notice when Deku's moves were similar to Bakugou, implying that she was watching Bakugou enough to be familiar with his moves while none of their other classmates notice this. She also notices that Deku learns to hop around like Bakugou with Full Cowling.

Uraraka explains her observations to their classmates as well, and often provides insight to Bakugou’s feelings to help her classmates understand him.

In Ch 66, All Might states, “Bakugou my boy! For when there’s a wall before your eyes, you laugh.” In the manga frame, one of the times All Might remembers Bakugou smiling at a challenge is during his match with Uraraka.

Bakugou tells Uraraka to take account of the hostages and villains, showing that he recognizes her capabilities. Overall, Bakugou seems to be more patient with Uraraka than most of his other classmates.

Bakugou states Deku shouldn’t even try to match his score in I-Island’s tournament because it’s pointless, to which Deku agrees. But Uraraka indirectly antagonizes Bakugou by stating that if Deku doesn’t try, then they’ll never know who’s better, causing Bakugou to immediately agree to Deku participating in the tournament.

Near the end of the movie, as the class is fighting their way to the top of the tower, Uraraka floats Deku and Melissa but refuses to release her quirk as robots appear and speed toward her to attack. At the last moment, Bakugou flies in, exploding them away from her. This action is important to note because Bakugou doesn’t seem to particularly believe in rescuing people so much as battling, and he later fails the License Exam for not rescuing anyone, arguing with the civilian actors to save themselves. 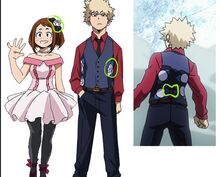 In the same scene in Two Heroes, it is clear that the flowers on Bakugou’s vest are the same as the flower pinned to Uraraka’s hair; a white rose.

When the students are cooking, Uraraka notices Bakugou’s knife handling skills and is impressed by it, to which he yells, asking what’s so special about it.

Despite shouting at her, Bakugou does not ask her to go away or call her an idiot. Ochako is also shown to be standing beside him as he chops throughout the entire scene.

Kaminari comments that Bakugou would have blown up anyone by then, though he hadn't.

When Class 1-A is informed that Bakugou is the target of the attack on the Summer Camp, in Chapter 78, Uraraka and Kirishima are the only two to shout, “Bakugou!?” with concern. The anime replaced her with Iida. (Kamilecn source) 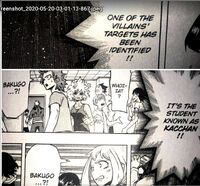 When Class 1-A discusses Bakugou's rescue after he is kidnapped, Uraraka is the one to mention that Bakugou would not appreciate them rescuing him, showing that she cares for his pride and is the only one that thought about what he may feel.

While explaining his plan to save Bakugou, Deku thinks back to Uraraka’s concern that Bakugou wouldn’t appreciate being rescued, and is able to correctly identify that Kirishima is the key to the plan and that Bakugou would only let himself be rescued by someone he sees as an equal. Solidifying Uraraka’s understanding of Bakugou. 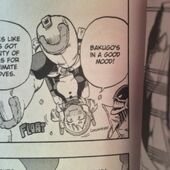 When Class 1-A is creating their special moves, she is shown to be paying attention to what Bakugou’s doing, and comments, distracting her from her practice. (Kamilecn source)

When the students move into the dorms, Bakugou and Ochako have rooms on the same floor.

During the team battles, Uraraka proudly looks on Bakugou, remarking how his team seems to trust him.

At the start of the arc, Uraraka shows concern for Bakugou being cut from the interview but tries to spin it as a positive.

When an elderly woman offers Bakugou a treat to thank him, Bakugo denies coldy, Uraraka then leans over saying he might as well accept her kind offer, Bakugou denies again stating that she only wanted to try one for herself.

During Bakugou and Deku's battle with Shigaraki, Bakugou has a flashback to when Deku was training to use float and black whip, Bakugou talks to All Might about the way he treated Deku, at one point stating that Deku not realising he was special annoyed him, and he wanted to distance himself from him because of it, almost exactly like when Uraraka told Bakugou it was like he was scared and wanted to distance himself from Deku in the Omake, showing again that Uraraka understands Bakugou.

As Gigantomachia is thrashing through a city to get to Shigaraki, Uraraka thinks to herself about how ever since the USJ attack, things have been getting worse and worse, one of the memories she thinks about during this is when they learn Bakugou had been taken. After the situation wih Tomura Katsuki and Ochako noticed that Izuku left UA but they decided to go after him and save him. But, Izuku refuses to go back to UA but Katsuki and Ochako and everyone in class 1a are planning to get him back by force because he's their friend. Bakugo then later on watches in respectful silence as Uraraka gives an impassioned speech about Deku to the citizens. 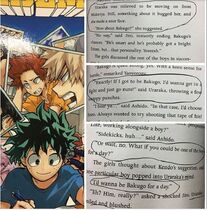 In the Season 2 Vol. 1 The Determination for the Sports Festival 体育祭への覚悟 (July 19, 2017), Kirishima is trying to talk to Bakugou about the upcoming sport festival when Ashido and Uraraka walk in. Bakugou refers to them by their nicknames, prompting Ashido to ask why he doesn’t remember their names. Uraraka responds, “It’s not that he doesn’t remember, it’s that he doesn’t care.” Bakugou agrees and rants loudly and angrily about why he won't use any of their names, prompting Uraraka to ask why he’s always so mad, and that maybe he should take more Calcium to-“, before Bakugou cuts her off.

According to Tumblr Fandometrics the ship was the twenty-seventh and sixty-ninth most reblogged ship of 2018 and 2019 respectively; making it the most reblogged Het ship for My Hero Academia for two years consecutively.

Despite its popularity, Kacchako remains one of the more controversial ships in the western BNHA fandom. Even with its "controversial" status in the fandom, many fans will point out that the Kacchako fandom produces a lot of good fanworks, especially fanart.

Kacchako - Make You Mine AMV

If i had you kacchako

AMV Kacchako - wish you were here

BNHA Bakugo x Uraraka "I Like Me Better" AMV

Kacchako - shut up and dance -AMV-

All Kacchako Moments So Far - Spoilers