• Friendship Moment — Keith and Acxa have a heart-to-heart after Keith saves her.
• Samus Is a Girl — Keith assumes Acxa is male the first time he sees her, due to her helmet obscuring her face and the fact that she never spoke to him then.
• Ship Tease — In season 7.

Kacxa is the het ship between Keith and Acxa from the Voltron: Legendary Defender fandom.

THE BELLY OF THE WEBLUM

During a mission for scaultrite, Hunk and Keith get separated while in a Weblum. Keith gets ejected out of the Weblum’s first stomach. As he’s falling, he seeing a ship caught in vine-like binds. He finds a person inside, saying to himself, “Impossible…” He cuts the binds, telling them, “Don’t move. I’m here to help.” Once out, he reaches down to help them up. Keith notices they have a Galra insignia. He takes their gun, holding it to their head. Moments later the Weblum’s bacteria start coming for them. The stranger detonates their ship as a means of escape, with them and Keith falling through more of the Weblum. On the ground, Keith believes they’re about to shoot him so he throws his shield up, only for the stranger to shoot more bacteria. With them saving him, Keith says they can keep their weapon.

They meet up with Hunk soon after, Keith then mentions how “he” doesn't talk much, eyeing the stranger. Keith informs Hunk they’re also Galra, which leads to Hunk joking if all Galra know each other. Keith is unamused by this.

Hunk thinks of a plan where he has to be on the outside of the Weblum to trigger its “laser puke.” As he goes outside provoke it, Keith and the stranger fight off more bacteria. Hunk succeeds in provoking beast, realizing it’s “about to get hot in here,” Keith and the stranger take cover, with Keith raising his shield.

Once packing the scaultrite, the stranger holds their gun to Keith’s head. Keith says, “So you’re just like the rest of them.” With that, they leave with a bag and Keith joins back with Hunk. As Keith is telling Hunk he’s on his way out, his voice breaks a little, clearly hurt by the Galra being just like the others he’s come across. Outside, Keith mentions how the stranger got away with a bag of scaultrite and Hunk asks if they should go after them. Keith says they shouldn't, as Zarkon will be defeated soon enough.

Hunk and Pidge find the comet that Lotor stole right from under the team presumably months prior, the same material Voltron is made of, and realize it’s moving. Seconds later, the Galra ship they’re looking at starts firing at the Galra base that ship is docked at. Seeing this, the team needs a new plan on how to approach. As Keith leads the mission, the team enters a room where they are attacked by Lotor’s generals. Keith and Acxa are soon engaged in a fight. The two collide their weapons together, sword and gun. As they hold their ground, that’s when Keith realizes the woman in front of him is the same one who he found and saved from the stomach of the Weblum. As he and Acxa continue their fight, Ezor comes to Acxa’s aid, throwing a blade between them, thus ending their fight.

At the Kral Zera - a coronation ceremony for a new Emperor or Empress - Keith is engaged in a losing fight with a Galra commander, Acxa comes to his aid, shooting the Galra's sword, allowing Keith to stand up and knee them to the face, saving him. From his position on the stairs, Keith looks down at Acxa, only for her to already be looking up at him. Moments later, she leaves without a word from either of them.

Keith manages to follow Acxa, Zethrid and Ezor through Haggar's wormhole. Zethrid tells them she'll “take him out,” but Axca tells her to “escort the package” back to Haggar. She then says she'll “take care of this one.” While in the Black Lion, Keith is able to outsmart her by flipping over onto her ship, crippling it. Once she's down, he flies off to find Shiro.

Soon later, she's back. Keith is distracted by Shiro; Acxa has her sights locked on him, ready to fire. A message comes through that the Galra ship is about to enter hyperdrive. Acxa sighs and leaves him, heading back for the ship.

Acxa was able to pick Team Voltron’s signal to their home planet, just like Zethrid and Ezor were. She sneaks aboard their ship, where she comes into contact with Coran. She and Coran come up with a plan to rescue the imprisoned paladins. Acxa executes her part of the plan by firing the ion canon, causing a massive breach in the ship. It’s ultimately the mice that take out the guard watching the paladins. It’s there that they communicate to Allura that Acxa is helping them. When Keith hears this, he questions it with surprise.

Coran is engaged in a losing fight with another guard, the now rescued paladins come to his aid. As Keith is helping him up, he asks Coran where Acxa is.

Acxa finds her way to Zethrid and Ezor, where Ezor makes the comment, “She’s always been sweet on the one with the flippity hair.”

With the paladins now having their bayards, Keith informs Lance for him to “lead the way” and “keep the team together.” Lance asks where he’s going, to which Keith replies, “Acxa saved our skin. I’m not going to leave her behind.”

Acxa is engaged in her own fight with Zethrid and Ezor. Ezor gains the upper hand and just before she can deliver a hard blow, Keith lunges in front of Acxa, activating his shield in order to protect her, sending Ezor back. When she lands she mocks Acxa by saying, “Oh look, Acxa, it’s your favorite paladin.” Stunned to see them working together, Zethris asks if they “actually know each other,” to which Ezor answers, “Yeah, don't you remember how [Acxa] never wanted to kill [Keith].” Zethrid laughs, “Aw, I guess it is true love.” Keith then begins their fight.

Him and Axca manage to hold off for a bit, before Acxa gets smacked hard against a door. Upon Keith watching her make the impact, he finds new strength to get Ezor off himself. With Keith managing that, Zethrid comes up beside him, shoving him and Acxa into a room full of synthian nitrate. Keith calls to the paladins to hone in on his signal and fire at the ship. When the paladins do, large explosions rock the ship. Keith uses his jet pack to fly him and Acxa out, shoving their way past Zethrid and Ezor. He holds Acxa's hand as they make their way toward the Black Lion.

Keith, Acxa and the rest of the team land on a barren plant. While there, Acxa tells them how they've been gone for three deca-phoebs (years). Keith then asks how she ended up helping them, where she continues to explain, “I knew I had to find my own path. And it lead me to you.” Keith softens into a warm smile as he thanks her for saving them. The two then share a silent moment together, before Acxa says how she hopes this makes up in some way for her wrong doings.

After Voltron was able to save Earth and were fully recovered from their injures, Acxa had made her way to Earth, along with many of Voltron's allies, where she sees Keith visiting the grave of his late father with Krolia and Kosmo. With a smile on her face.

“[Acxa's] always been sweet on the one with the flippity hair.”
— Ezor, The Way Forward.

“Acxa saved our skin. I’m not going to leave her behind.”
— Keith, The Way Forward.

Zethrid – “So do you guys actually know each other?”
Ezor – “Yeah, don't you remember how [Acxa] never wanted to kill [Keith].”
Zethrid – “Aw, I guess it is true love.”
— The Way Forward.

Some fans often theorize Keith and Acxa are related: from being siblings to being aunt and nephew. After the release of season 7, more people are shipping them romantically as there's no more animosity between them.

The ending to the series was purposefully ambiguous, and Kacxa is, according to some fans, implied to be canon; as they work together within the Blade of Marmora. Though series-wise, their relationship is platonic.

Keith saving Acxa from a crashed ship is similar to how his father saved his mother Korolia. This maybe seen as history repeating itself. Also as correcting the mistakes of the past as Keith's father and Krolia were forced apart. Keith's father also passed away before he could be reunited with Krolia. 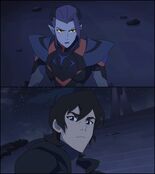 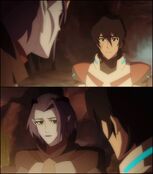