KaeLisa is the het ship between Kaeya Alberich and Lisa Minci from the Genshin Impact fandom.

After facing off with Stormterror (Dvalin) with the help of a mysterious voice, Traveler lands their glider, and is approached by cavalry captain Kaeya. He promptly brings Traveler to meet with the Acting Grandmaster, Jean. Lisa is also present, and it is established that they are all a part of the same order, known as the Knights of Favonius. Kaeya and Lisa are shown to interact in regards to the Stormterror crisis. Jean mentions that Lisa, having used her detection magic, discovered that a leyline disorder is enhancing Stormterror's powers. Kaeya, intrigued, questions "Is that so?" Lisa then turns to him and provides further information. She states that the leylines are located in the Four Winds Temples, as well as reaffirms that Stormterror is drawing power from said temples. Following this interaction, Kaeya, Lisa, and Amber work together to cut off the source of power, by tackling a temple each. Traveler meets up with each of them, and both Kaeya and Lisa officially join the party.

Prior to this part in the event, Jean had given the role of Acting Grand Master to Kaeya while she was away at the archipelago. In this part, however, he was discovered to be at the archipelago as well. When asked who was overseeing the Knights of Favonius, Kaeya stated that he had given the role to "the mighty Librarian, Lisa, of course."[1] He then went on further to compliment her strictness when it came to keeping things in order. Kaeya is known for dedicating himself to "studying threats in and around Mondstadt,"[2] and therefore, Mondstadt's security is something of importance to him. Of all the knights, it was Lisa whom he entrusted the task of overseeing the Knights and keeping the city secure.

Following a realization that the tavern is a pleasant atmosphere that can help one unwind and relax, Jean asks Lisa, "Is that why you and Kaeya like the tavern so much?" Lisa replies, "Yes, and no. It really depends on who's making the drinks." Asides from confirming a shared hobby between the two, this is the first spoken dialogue that suggests that Kaeya and Lisa interact beyond work.

Kaeya warns the Traveler to not forget to return their books on time, continuing to state in a cheeky tone that he "made that mistake once and boy was she angry." He explains that his arm is still numb from the last time he made the mistake, likely from being zapped with Lisa's electro abilities.

While Lisa does not have a direct voiceline talking about Kaeya, her voiceline about Diluc involves her sounding amused when she states that she knows someone else the Traveler should talk to instead. That person (likely) being Kaeya, who had grown up with Diluc.

With Lisa, "though her attitude to life may appear at first to be one of ruthless efficiency, it is in fact better understood as a product of her incorrigibly lazy nature."[3] Kaeya, on the other hand, "is sometimes seen as overly laid-back and even lazy, but he takes his work seriously."[4] To an observer, Kaeya and Lisa offer almost opposite first impressions, and upon further inspection, have different ways of approaching their work. Yet at the end of the day, they both end up being some of the most effective members of the Knights of Favonius, as noted by many of their fellow Knights. Though, the two do appear to have a knack for passing their work to other people when they get the chance. Kaeya gets a certain kick out of "convincing others to do his work."[4] And Lisa, when she first joined the Knights, was tasked with much more than just the management of books and documents. She was even considered for a captaincy position (that she promptly declined). In her story, it is revealed that she negotiated with Kaeya to offload some of her work.[3]

In this part, Eula had just walked into Master Jean's office while carrying a sword. The occurrence was noticed by some recently-recruited guards, who decided to bring it up to Kaeya and Lisa as they were walking together. Soon after, Lisa rushed into the office, concerned about missing out on a tea break. Kaeya, on the other hand, stayed to take the opportunity and tease the guards. With some flourished explaining, he managed to convince them that 'tea break' was actually code for 'sparring'.

HoYoverse had released some promotional artworks featuring Kaeya and Lisa as chibis, interacting with one another in a friendly fashion.

KaeLisa, being a rare pair, doesn't have much traction within the fandom. It is more often seen as a platonic ship rather than a romantic one. On a platonic front, Kaeya and Lisa's dynamic is generally envisioned as best friends and co-workers that enjoy kicking back and gossiping together. Both are known to be intellectual, charming, secretive people, with a tendency to tease others. On top of that, they both have a desire to gather information, albeit using different methods. Overall, they are considered a casual, but engaging, back-and-forth duo. Romantic KaeLisa's dynamic tends to be seen as all the platonic aspects put together, plus a romantic layer. Friends with Benefits and Friends To Lovers are common tropes used in their romantic portrayals.

Kaeya and Lisa both have different ways of conducting themselves. Lisa finds herself reserving her energy and keeping things laid back. As Albedo sees it, she appears to be intentionally limiting herself for a hidden reason.[5] Kaeya, on the other hand, finds himself expending his energy, and seeks to push the limits of himself and others.[6] While opposite, they both act in the name of enjoying the present moment. Shippers feel Kaeya and Lisa would appreciate that aspect in each other, and would strive to have fun and enjoy time together. Even in high-stress situations, such as combat, they would still find the amusement in it (and also manage to fit in some banter).

One particular headcanon involved in KaeLisa scenarios is that Kaeya is a bookworm. This is due to his love of stories, and the fact that he keeps his intel list in a copy of The Adventures of Angelos.[7] Additionally, in one of his official birthday artworks, Kaeya was depicted to be reading on a couch while surrounded by multiple books.[8] With all this in consideration, the Mondstadt Library (where Lisa works) is likely a spot that Kaeya would visit in his spare time, asides from bars. This leads to imagined scenarios of the two hanging out, bonding over the shared hobby of literature/stories/information.

While both characters are outwardly charming and have no troubles discussing a variety of topics, they are incredibly avoidant when it comes to discussing themselves. Kaeya's story reveals that, to him, his only path is to "live the rest of his life under the heavy burden of lies."[9] Lisa's story mentions that she "sensed the deep secret hidden in the shadows" of the knowledge she sought, and the price it seemed to demand, which led to her growing fearful of the truth.[10] Shippers feel that Kaeya and Lisa would be able to a provide a solid support system for each other, one that allows them to open up to a "bird of a feather" who would understand and relate. On a romantic level, their shared inclination towards secrecy also leads to an interpretation that they would likely prefer to keep their relationship and affection in private.

In Klee's Character Tale, right after the comments about Kaeya being the one telling Klee the (imaginative) stories, Lisa states "perhaps we've made the child's studies a little too imaginative lately?"[11] This moment has brought forward headcanons that Kaeya and Lisa tutor Klee together.

Their canon dynamic involving them relieving each other's workload has led some to interpret Kaeya's voiceline about Lisa as yet another way of making her job easier. By spooking the Traveler with the story of his arm still being numb from when he returned his book late, Kaeya convinces one more person to return their books on time. It is likely he told that story to many others in Mondstadt as well, helping build up a fearsome reputation for the resident librarian, and in turn, easing her workload. How true the story is in the end is a matter for debate. Klee's Character Tale and Eula's Character Story 1 both serve as a few of many examples suggesting that Kaeya has a knack for convincing people of things that might not be entirely true. Yes, Lisa is a truly formidable individual, and Kaeya does recognize that by what he had said about her in Midsummer Island Adventure: III. However, when it comes to collecting overdue library books, Lisa's own Story Quest has shown she doesn't zap people who are running late.[12] The only moment she had electrocuted someone over one of the library books was with the Abyss Mage, who had refused to return the book and threatened to reveal its secrets.[13] The more people perceive Lisa as someone who easily summons thunderstorms and becomes terrifying when collecting overdue books, the less she has to go chasing after people. What quicker way for that perception to become the norm than to spread a story? This interpretation falls in line with Kaeya's relation to storytelling and strategic thinking, as well as Lisa's actual actions, and their calm and friendly dynamic outside that story.

Another take on KaeLisa is that they are friends/lovers, but are both cursed and rapidly running out of time. As such, Kaeya and Lisa - being aware of the other's curse - make the most of the days they have left together by doing activities they always wanted to do. The headcanon is inspired from the game's introduction of the Khaenri'ah curse - something that is potentially affecting Kaeya - as well as Lisa's limited lifespan curse (an early concept described by a product manager at HoYoverse).[14]

Razor and Fischl are seen by some shippers as KaeLisa's unofficially adopted kids, specifically in the sense that Kaeya and Lisa would act as a duo of mentors for the two often isolated Electro characters. The dynamic is imagined to involve: 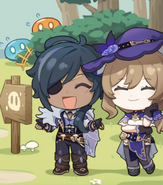 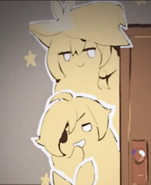 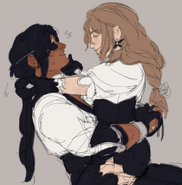 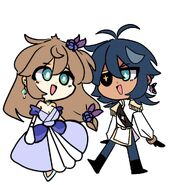 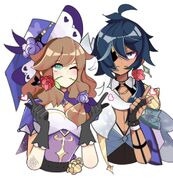 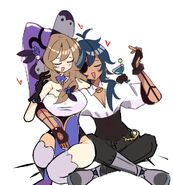