• Opposites Attract - Kaeya is known for his carefree and teasing personality while Albedo is more of a timid and quiet person.
• Birds of a Feather - Both characters are mysterious among fans, knowing that they might have connections to Khaenri'ah.

“What, you into him as well?”
— Kaeya about Albedo

Kaebedo is the slash ship between Kaeya Alberich and Albedo from the Genshin Impact fandom.

It's stated that they met and know each other. Kaeya and Albedo are both living in Mondstadt and share a similar color scheme. They are both Knights of Favonius Captains : Kaeya the Cavalry Captain, and Albedo the Chief Alchemist & Captain of the Investigation Team. It's also known that both Albedo and Kaeya are taking care of Klee, Klee is something like the "Daughter" of the Knights of Favonius, and the Members take care of her, due her mother leaving her alone, to travel somewhere dangerous with a traveling companion.

In Kaeya's voiceline about Albedo, he flatters him by saying that everyone loves him, some more than others. He comments on Albedo's charm, saying "what, you into him as well?" implying that he is interested in Albedo. However, Kaeya is known for his flirtatious manor, so it's possible he did not mean it seriously.

Since Albedo doesn't really enjoy socializing, the fact that he has a relationship with Kaeya close enough for him to sketch him in a teasing manner shows that he cares about him. (Albedo's "About Albedo – Socializing" voiceline). Albedo also refers to him only as "Kaeya" instead of Cavalry Captain, and Kaeya refers to him as "Albedo" instead of Chief Alchemist. This shows that the two of them are not strangers. Though it is not explicitly confirmed whether they are close friends or not, Kaeya's and Albedo's Voicelines about each other imply that they are or that they get along well.

In Act 3, Kaeya, Albedo, Diluc and Razor went together on Dvalin to the Golden Apple Archipelago.

While Kaeya and Diluc were arguing, Albedo left them together for a moment and went to another island. Kaeya and Diluc met the Traveler, Jean, Barbara and Klee on the Island. Still in their fight, Kaeya looked at Diluc saying "Albedo is an alchemist, and skilled at his craft. If I could use those beautiful artificial flowers of his, it would be a simple affair to traverse these islands" because Diluc kept melting the water that Kaeya froze because of the Cryo and Pyro incompatibility. Also, as a reference to Albedo, Kaeya said that "If you had a Geo Vision, I'd be long asleep on one of the other island".

Then, all of them expect Razor joined Albedo. Kaeya spoke to Albedo telling him "I trust you enjoyed your stroll? How kind of you to maroon us on that neighboring island" and Albedo answered in the same way, ironically, by "Please, don't mention it. I felt that the two of you could do with some alone time". Thereafter, the whole group joined Razor on the central isle.

After defeated the awakened Inazuman device, all of them theorize together about the machine, the Island and its past. Then, the group went to the isle with the "big shield", where Dodo-King must be. There is a device on the isle to break the energy shield. After thinking about how to break it, having something to do with fish, Klee ran to fish blasting. In the end, everyone went to do something on their side : Albedo left without anyone noticing him and Kaeya took a stroll, exploring the Island.

“Albedo, eh? Calm, collected, and incredibly talented. He's the type everybody likes, some even more so than others. What, you into him as well?”
— Kaeya's voiceline about Albedo.

“Relationships are...quite troublesome. Once you establish a relation with someone, you must continue to maintain it; if you lose contact, you must reestablish the relation. This taxing cycle requires a lot of time...”
— About Albedo – Socializing

“Albedo is an alchemist, and skilled at his craft. If I could use those beautiful artificial flowers of his, it would be a simple affair to traverse these islands. [...] If you had a Geo Vision, I'd be long asleep on one of the other island. ”
— Kaeya to Diluc in Midsummer Island

Kaeya – “I trust you enjoyed your stroll? How kind of you to maroon us on that neighboring island.”
Albedo – “Please, don't mention it. I felt that the two of you could do with some alone time.”
— Kaeya talking to Albedo

Kaeya's voiceline was the main "motivation" behind this ship and the interactions between them. In the English dub, "What, you into him as well?", which implies that he himself could possibly be interested in Albedo. After the Midsummer Adventures aired the ship became more popular, especially since Kaeya seems to be fond of Albedo. Calling him talented, etc. It's currently the seventh most written ship in the Genshin Impact AO3 tag, as well the most written ship for Albedo and the second one for Kaeya.

The ship also sailed because of the popular Opposites Attract Trope, since Kaeya is a carefree person and Albedo is more serious and quiet.

Since Albedo considers Klee as his younger sister, and Kaeya takes care of Klee and seems to view her as a younger sister as well, there is a chance or headcanon that they might take care of her together.

A portion of this ship is fueled by the fact that Albedo was created by the alchemist Gold, a resident of Khaenri'ah, and that Albedo have ties to Khaenri'ah. Kaeya is also from Khaenri'ah (one theory suggests that he may be a prince of the country), and many works capitalize on this possible shared history. Albedo additionally expresses that he may one day "lose control" and destroy Mondstadt. Because of this, fans often tease the ship by making theories on how the pair could possibly destroy Mondstadt together in the near future. 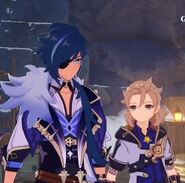 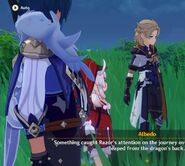 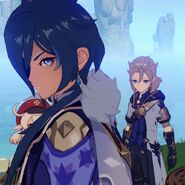 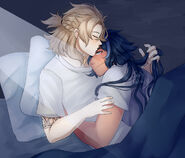