• Birds of a Feather — both Ibuki and Kaede are musicians.
• Opposites Attract — while they are both musicans, they specialize in two very different genres of music. Ibuki specializes in heavy metal, while Kaede specializes in classical music.

Kaebuki is the femslash ship between Ibuki Mioda and Kaede Akamatsu from the Danganronpa fandom.

Both characters originate from two different games, and thus have never interacted in the main stories. However, the two of them share a number of interactions in Ultimate Talent Development Plan. During the school festival, Kaede plays an exciting music piece, which earns her the praise of Ibuki, who says Kaede was “super rockin’”. Kaede is happy to see that she came to her performance, and is a bit nervous as to what the Ultimate Musician thinks of her music. Ibuki tells her that even though the two of them play different genres, her piano performance rocked her very soul. Kaede sees that Ibuki seemed to like her music very much.

In another scene, Ibuki runs into Kaede and Sayaka Maizono. Kaede notes that Ibuki is super excited as usual. Ibuki says that the three of them were gathered together by the aura of a musical revolution, due to all three of them having a music-related talent. However, she also says that their styles of music are totally unique and clash with each other, which Kaede agrees with. The three girls still wish to collaborate in some way, and eventually reach a compromise, since Kaede suggests they each contribute what they are good at. Although, both Kaede and Sayaka express concern over Ibuki being in charge of the lyrics and composition.

While playing as Ibuki, for the Winter event, she can decide to share her overflowing energy with Kaede before the Christmas party. Ibuki announces to Kaede that she came to share her energy with her before Kaede goes up on stage to perform a collaborative piece she did with Sayaka. Kaede expresses gratitude that Ibuki came to cheer her on even though she will not be able to make it to their performance. However, Ibuki clarifies that she actually plans on attending both the concert and the Christmas party. Kaede promises her that she will hear the best performance, which excites Ibuki.

In Danganronpa S: Ultimate Summer Camp, Kaede and Ibuki have another interaction along with Sayaka again. Ibuki and Kaede find that they can both compose music in their head, and often come up with things while they are in the bath. Ibuki starts singing, which Kaede likes, making her wish she had a piano so she could play along. After Sayaka starts singing with Ibuki, Ibuki tells Kaede to sing too.

Since Kaede and Ibuki are from different games and their interactions are limited to Ultimate Talent Development Plan, Kaebuki is not very popular and somewhat obscure. They seem to mostly be a platonic pairing as opposed to anything romantic. The fact that both girls are musicians is the main reason for their shipping. Despite the fact that their musical styles are very different from each other, some believe that they could somehow make something together, similar to the events that happen in their interaction with Sayaka in UDTP. Kaede and Ibuki are also both known for being charismatic, encouraging and maintaining a level of optimism in any situation. Additionally, Ibuki’s very loud personality and appearance could compliment Kaede who is a bit softer overall, since they contrast nicely. Since Kaebuki is a small ship, it has much more popular rival ships such as Band Aid or Irumatsu. 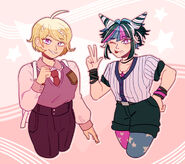 Kaeibuzono refers to the ship between the two and Sayaka Maizono