Friends (faked on Tsumugi's side); Both are dead

Kaemugi is a femslash ship between Kaede Akamatsu and Tsumugi Shirogane from the Danganronpa fandom.

Upon first meeting Tsumugi, Kaede initially thought her to be a life-sized doll, and poked her since she wasn't moving. Kaede didn't expect that Tsumugi would have title of the Ultimate Cosplayer due to her normal-looking appearance. She states that she could feel some sort of "pheromones" that can't stop from falling of Tsumugi because she was out of costume. She also said that Tsumugi has a "strange, almost sexy aura" about her, possibly because she had people ogling her curves on a daily basis, or so Kaede says. It is unclear whether Kaede was just being playful or actually hitting on Tsumugi, but it should be noted that Shuichi even told Kaede that she sounded like a creepy old man after Kaede made those comments about her. When Tsumugi worries whether or not they're going to be okay, Kaede notes that Tsumugi's frightened look is kind of sexy, but then says she was kidding.

In the bonus scene (triggered only if the player gave Tsumugi Nail Brush present in Chapter 1), Tsumugi offered Kaede to paint her nails which resulted in Rantaro interrupting Kaede's appointment with her. It is later revealed that Tsumugi actually holds no friendship towards Kaede. In Chapter 1, Tsumugi had figured out Kaede's plan and when she discovered that Kaede's plan failed, Tsumugi decided to kill Rantaro herself to prevent everyone else from being executed. Because of this, Tsumugi framed Kaede for the action and executed her as well.[1]

After the first body is discovered and investigation goes underway, Kaede hears from Korekiyo that Tsumugi left the dining hall to use the bathroom. This makes Kaede suspicious of Tsumugi, so she goes to talk to her. Kaede asks if Tsumugi could have cosplayed as someone to make it look like they committed the crime instead of Tsumugi. Tsumugi takes Kaede to the girls washroom and puts on Kaede's clothes to show that when she tries to cosplay a real person, she gets "cospox", so she couldn't have done that. Kaede is shocked by seeing this, but accepts it as an alibi.

In the first of their Free Time Events, Kaede and Tsumugi talk about cosplay. Their conversation moves into discussion about Kaede's talent, and Tsumugi is overwhelmed by how "pure" Kaede's responses to Tsumugi's comments are. In their second Free Time Event, Kaede notices that Tsumugi seems depressed and asks if she's okay. Both end up getting depressed after realizing they'd have nothing left without piano and cosplay respectively. They decide that they need to try a new hobby, so depending on the choice, they agree to either bake, read, or go out to a cafe together once the killing game ends.

In Danganronpa S: Ultimate Summer Camp, Tsumugi and Kaede chat with Junko Enoshima. They both criticize Junko's swimsuit, and Tsumugi shows concern for Kaede after she expresses that she partially likes Junko's swimsuit.

Kaemugi sailed mostly as a result of the cospox scene where Tsumugi puts on Kaede's clothes to demonstrate how her "cospox" works. Kaemugi is also shipped for Kaede appearing to be attracted to Tsumugi and complimenting her a lot. However, with the reveal that Tsumugi was the mastermind and framed Kaede for Rantaro's murder after the latter's plan failed, the ship lost a lot of popularity. Kaemugi is the most written ship for Tsumugi on Archive of Our Own. It rivals other more popular ships of Kaede's, such as Saimatsu and Irumatsu, as well as Shironaga for Tsumugi. 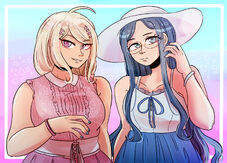 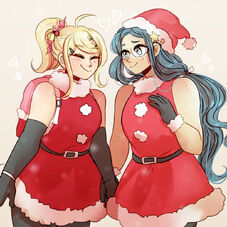 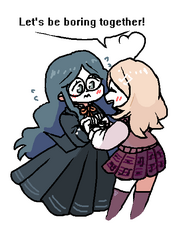 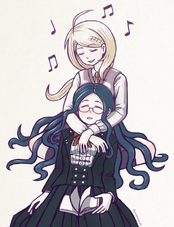 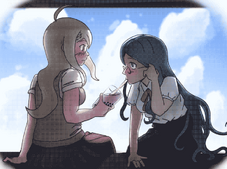