“That's exactly what I was gonna say! We're really on the same wavelength, Kaede!”
— Kaito after Kaede encourages the group not to give up in Chapter 1.

Kaimatsu is the het ship between Kaito Momota and Kaede Akamatsu from the Danganronpa fandom.

At first, Kaede is angered when Kaito informs her that he had broken the law in order to become an astronaut. However, he is later shown to be one of the few who always support her during the Killing School Semester, as they have similar optimistic way of thinking. On occasion Kaede gave rousing speeches of optimism during times of distress when the class had first met. Kaito always responded agreeably stating he would have said the same. Kaito requests Kaede and him hug which she graciously refused showing despite their relationship lacking affection, they both share the same mindset.

Kaede is shown to appreciate his support, though she mostly seems to thank him only in her thoughts. Kaito is highly supportive of Kaede. Kaito compliments her on her tenacity to round up everyone and have them work together, enough to say she'd make a good astronaut in his Free Time Events. He does, however, comment on how quick she is to act on her own, to which he offers her to be his sidekick. She graciously refuses, but is uplifted by Kaito's supportive attitude.

Kaito is quick to defend Kaede's actions during Chapter 1. When Kokichi tries to persuade the other students that Kaede was forcing them into despair, Kaito becomes angered and assures Kaede that she was not at fault. Kaede is soon revealed to be the culprit behind Rantaro's murder. Kaito cries and along with Gonta and Tenko, even threatens to fight for her life at first. Kaede quickly puts a stop to this herself.

“Kaede fought with her life on the line! And so will I!”
— Kaito about to fight the Exisals to stop Kaede's execution from happening in Chapter 1.

“Didn't you hear what Kaede said!? She said...she believed in you! That she passed her wish onto you! But what the hell's wrong with you!? You didn't say a damn thing to Monokuma! You call yourself a man!?!?”
— Kaito being mad at Shuichi when he believes the latter doesn't "respect" her wish.

The ship sailed as a result of Kaito looking up to Kaede and her leadership due to having similar views. With him reacting so strongly to Shuichi being the one whom Kaede passes her wish to and later training him, some fans have theorized that Kaito might have had a crush on Kaede. Whether that was or wasn't the case wasn't confirmed. Though, popular ships for two Saimatsu and Harukaito tend to overshadow Kaimatsu often. The two have 53 works made for them in Archive of Our Own. It gets lots of art made for it, most fanart shows them having a good time as friends together. 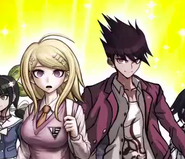 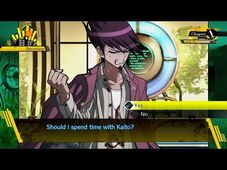 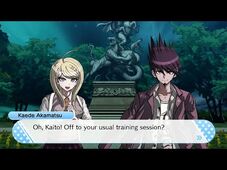 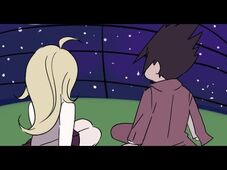