KamiJirou is the het ship between Denki Kaminari and Kyouka Jirou from the My Hero Academia fandom.

Denki and Kyoka are partnered on Team G for their Battle Trials as the 'hero' team against Team C's 'villain' opponents, Momo and Minoru. The two are briefly shown walking a hallway as Kyoka extends one of her (earphone) jacks towards a wall and punctures it. She focuses for a moment before turning to Denki and pointing him to head upwards with her. Denki looks where she points and begins to allow some of his electricity to crackle upon his right palm, smirking all the while.

As the class starts their vote for class president (and vice president), the scene briefly cuts to show them, and only them as they request the role(s).

After arriving at the USJ, the class falls under their first attack by the LoV. Kurogiri, a villain with a (mainly) gaseous composition that allows him to warp whatever his mist touches, separates the class and spreads them through the building. Kyoka and Denki, alongside Momo, are stranded in the Mountain Zone of the area. They’re ‘greeted’ by an amass of villains who immediately rush to attack them. Momo quickly begins combat by creating an assortment of weapons, handing a sword to Kyoka. After seeing this, Denki yells for Momo to give him a weapon as well, but Kyoka rebukes him, saying that since he is “the one with electrical powers, he should just zap the enemy so we (they) can run.” At this, Denki questions if she remembered their shared Battle Trial and that he could only coat his body in electricity, not shoot it (without it getting everywhere and hitting her and Momo). He adds that he can’t even use his receivers to call for help, as a fellow ‘electric-type was ‘jamming the signal,’ leaving him to depend on Kyoka and Momo.

However, after a bit of coaxing, he reaches contact with a villain and electrocutes him. He then flips his previous statement, telling Kyoka that she could count on him. Kyoka replies, saying that Denki is “exhausting.” Momo later creates a large conductor to prevent her and Kyoka from being hit with Denki’s electricity, allowing him to give a full-force attack. After this attack’s success, Kyoka yells, “Don’t you DARE look over here, Kaminari!” as Momo’s top had been destroyed from creating such a large object (the conductor). However, this attack “fried” his brain and left him in his ‘Whey/Dumb Mode.’ This lets him get snatched by the ‘electric-type from earlier, who was left impervious to his previous attack. Kyoka attempts to distract his captor with compliments about his quirk, although this fails. However, alongside a few select heroes, their teachers arrive and save the trio in the nick of time.

After the events of the USJ, Denki leans back from his desk to say to Eijiro that they were practically celebrities with how many news channels were reporting on that event. Kyoka tells him to get over himself, as it’s the attack they care about, not the students.

After the announcement of the Sports Festival, Denki gives a brief on what could happen if they make themselves notable in the Festival, perhaps granting them the opportunity to become a pro’s sidekick. Kyoka says that’s as far as some people get and teases that that’s probably where Denki is headed. Later, Denki tells Mezo that he’ll likely have no trouble getting attention with his quirk. Giggling and blushing, Kyoka says Denki will have no trouble either, referring to his ‘Whey/Dumb Mode.’ Denki yells a “HEY!!” in retaliation to this.

Kyoka is seen standing behind Denki at the start of the Sports Festival. Later, during the Cavalry Battle, Denki releases a large, full-field shock of electricity. As it hits her, Kyoka angrily calls “KA-MI-NARI!”

As they decide their hero names, Denki voices that he’s struggling to decide on one. Hearing this, Kyoka uses one of her (earphone) jacks to pick his shoulder for his attention, before suggesting “How does ‘Jamming-Yay/Jamming-Whey’ sound?” Denki perks up at this, recognizing the name as a play on words of the esteemed English author, Hemingway. He tells Kyoka that she’s clever and winks, saying he likes it. Kyoka denies the Hemingway comment, blushing and giggling as she says that even though he’s powerful, he always “jams his brain.” Denki yells, “Oh quit it, Jirou, stop messing with me!!”

After returning from their work studies, the class shares a few stories. Denki says that Stain’s (hero killer) motives make him somewhat cool for doing what he does. He then realizes that he said that right in front of Tenya, whose brother was one of Stain’s direct victims. Tenya tells him it’s alright before (loudly) directing class to start. Kyoka snaps that it’s Denki’s fault for “talking about weird things.” Denki apologizes to her, adding that he’ll keep his mouth shut.

In one OVA (‘original video animation,’ not made from original manga content), Denki attempts to flirt with a girl he deemed pretty. As she sees this, Kyoka jabs him with one of her jacks, telling him to stop being an idiot. She blushes as she says this, implying potential jealousy on her part. During the later training exercise, Kyoka is harmed by an attack by Katsuki, which leaves her ears in great pain. Denki holds her torso on his lap and keeps his arms around her as he tells Katsuki that move was going too far.

After Katsuki is rescued, Eraserhead harshly scolds the class, saying he would’ve expelled everyone but a few if he could. This puts everyone in a dark mood, including Eijiro, which upsets Katsuki, who then drags Denki behind a bush to force him into his ‘Whey/Dumb Mode’ as a way to distract from the sadness. Upon seeing Denki walk around all dumb-like, Kyoka breaks down in giggles.

The class later explores one another’s rooms post-decorating. Kyoka comments that Denki’s eccentric room “looks like the store in the mall” she’d avoid, to Denki’s evident distraught. When reaching Kyoka’s room, Denki comments that Kyoka has lots of instruments, the attention of which embarrasses her.

After Mina presents her dancing expertise, Denki comments on how it gives her her unique mobility in hero work and compares it to Rikido and his baking/sweets. He then adds that Kyoka’s music hobby is likely the same in usefulness. To this, Kyoka says, “What? I don’t know..” Denki replies, “Oh, come on! Your dorm room looks like the inside of a music store! One look, and I can tell music is your whole life.” Kyoka blushes at this and tells him to drop the subject. Denki smiles at this and says, “Aw, yep, that’s passion.” He says that Kyoka should start a ‘jam sesh’ but is cut off by Kyoka jabbing her jacks at his face to shut him up from embarrassing her further.

After deciding to play a full-class concert for the upcoming festival, it comes out that Kyoka doesn't want her music to overtake her hero career, which allows Denki to realize why Kyoka got so defensive when he brought up her musical prowess. He then walks to her and leans into her face, telling her that even with that, she can play so many instruments, which makes her amazing. This causes her to blush in a way unseen before, partially due to Denki's compliment and the sheer closeness he put between him and her.

After selecting Denki as a guitarist for the concert’s band, Kyoka comments, “Being embarrassed.. worrying what others are thinking.. that’ll kill our vibe. Having fun, that’s what matters.” Denki smiles and points his fingers at her, teasing, “Yeah, says the girl who was super scared to front the band!”

Although their ship has long been considered a reasonably local het variant for Kyoka amongst people who don't ship MomoJiro, KamiJiro quickly gained explosive popularity after manga and anime adaptation events. The great emphasis on Denki helping Kyoka during the festival arc at the end of the third season of the anime and his recognition of Kyoka as his most important person in the manga chapters that were released at that time made many people sincerely believe that the relationship between the two has excellent potential, many interpret his words to be romantic. However, his words weren't explicitly stated to be romantic.

Due to the fact that, unlike Momo, before that, Jiro almost didn't receive any straight teasing in the story and was even widely interpreted as a closet lesbian in fanon, the sudden popularity of the ship among fandom also gave rise to many jokes that MomoJiro or TodoMomo ceased to interest anyone and were forgotten. And while TodoMomo fans generally supported KamiJiro as shipmates, MomoJiro supporters were usually dissatisfied with the rise in popularity of this ship, as it made her previous reading as a lesbian more debatable. At the same time, due to its greater popularity than TodoMomo, this ship didn't receive the same negative attitude in ship wars.

On AO3, KamiJirou is the second most written ship for Kyoka and Denki (falling behind MomoJirou and KamiShin, respectively). It is also the twenty-seventh most written for in the My Hero Academia tag. 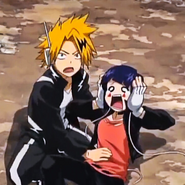 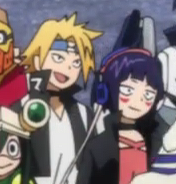 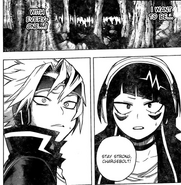 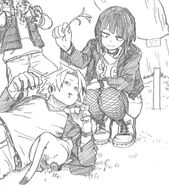 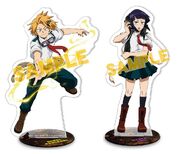 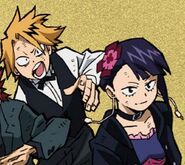 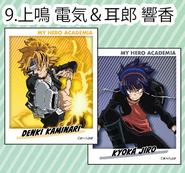 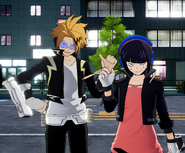 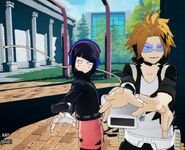 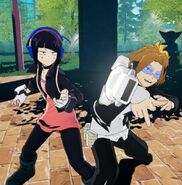