KamiMina is the het ship between Denki Kaminari and Mina Ashido from the My Hero Academia fandom.

Mina and Denki get along notably well, although they have sufficiently less screen-time compared to many of the other characters in the show. When they do appear, they are commonly shown together, however. They share their first notable interaction in the moments before the Final Exams Arc, in which they exclaim that it should be “easy” in their shared thoughts that the “exam” would simply be another fight against robots.

The two share some of the lowest grades in the class as well, ranking 19th (Mina) and 20th (Denki) in their midterms exams. Later on, they both receive an invitation from Momo Yaoyozozu to study at her house, and can soon be seen as they struggle with the tedious task that is schoolwork.

At Field Gamma, Denki and Mina are partnered up together against principal Nezu. They then begin to strategize on how to take out principal nezu. They then come to the conclusion that using electricity would be effective, because they believe Nezu's too small and weak. However, it's revealed that Nezu has been operating a crane at a safe distance from them and starts knocking down the buildings surrounding them. Denki and Mina then try to run for the escape gate, but Nezu stays one step ahead of them the entire time. Eventually, Denki and Mina run out of time before they ever even realize what Nezu was doing. They then fail the test and it showed that their weakness lies in facing intellectual villains. The next time the two are seen together is in season 3 where they start clapping together with Ochaco about how excited they are about camp.

They are then seen together again alongside, Kirishima, Sero and Sato with Mr. Aizawa. Since those five failed the exams he then said he was going to train them all very hard. Mina and Denki then complain about when they were going to get a break and their "treat" once it was all over.

KamiMina is considered a rarepair in the MHA/BNHA fandom due to the rather minor roles Mina and Denki play. Despite this, it still carries a following thanks to their dim-witted, fun-loving personalities that are sure to make a hilarious couple.

The ship is quite popular as a friendship rather than romantic, and carries on through a large number of fanworks, especially BakuSquad based ones.

This pairing is often shipped alongside other “BakuSquad” pairings (e.g. KiriBaku, MomoJirou) as a fun way to pair them off. 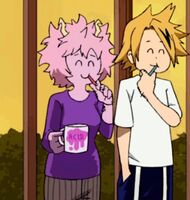 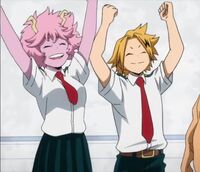 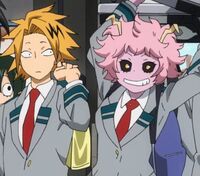 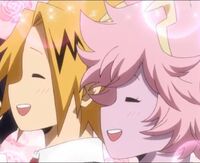 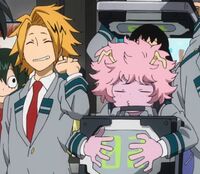 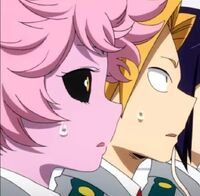