Kamineta is the slash ship between Denki Kaminari and Minoru Mineta from the My Hero Academia fandom.

Denki and Minoru are seen usually hanging out with each other, mainly because they both have a shared perverted interest in girls. The first time they were seen together was in season 2 where they pulled an elaborate prank on the Class 1-A girls during the U.A. Sports Festival. They fooled them into thinking they had to wear cheerleading outfits on orders of Shota Aizawa. They were when pleased when their plan worked. Next, they were seen trying to trick Izuku to get Aizawa-sensei to get them permission to use the school swimming pool just so that way they can see the girls wearing bikinis.

Later they were both sorely disappointed to find the girls wearing school swimsuits instead. Minoru on ther hand was still happy that they were wearing swimsuits while Denki angrily insisted that he should have some standards. They were then both grabbed by Tenya towards the pool. In an episode in season 3 he tells Minoru that he's crossing a line when he tells the other boys plan to climb the wall seperating the girls' side of the hot springs to peep on them. Also in another episode when there was revealed to be a peephole in the girls lockeroom Mineta had no problem with wanting to invade the girls' privacy and look through it while Denki stood there shocked.

In season two Denki and Mina are shocked to find out that Minoru has very high grades, to which he endlessly gloats about. Denki then angrily tells Minoru that doesn't he know that weirdo little creeps like him are only likeable if they're kind of stupid. They then in season 4 are seen getting jealous of Izuku because Hanta had told them that he saw him and 'Camie' (It's Himiko) in the rocks together buck naked. They then both march over to him and angrily demand answers. They then are both seen together again in the two heroes movie where they're seen serving as waiters.

Kamineta is a rare pair within the My Hero Academia fandom. Most fans of this ship love the natural perverted inclination between the two. Some prefer to see them as friends instead of lovers. Some people are also attracted to the two hopeless losers in love trope. It has a small fanbase on Tumblr. 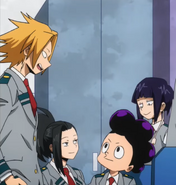 Denki and Minoru talking with each other