View source
watch 01:25
Jurassic World: Dominion Dominates Fandom Wikis - The Loop
Do you like this video?
Play Sound
This article is about Izuru Kamukura, the alter ego of Hajime Hinata. You may be looking for the ship between Nagito Komaeda and Hajime Hinata.

When Izuru first meets Nagito he attempted to kill him with a gun after the latter prepared to do the same to Junko. However, because of Nagito's luck, the bullet pierces his student handbook instead. Nagito appears almost immediately attracted to Izuru and Kazutaka Kodaka has described the scene as similar to a beautiful, elegant dance. Nagito is seen to be blushing due to realising that someone was worthy enough to outmatch his luck, before passing out from the impact. Izuru is the only person Nagito can physically love (without feeling guilt) because Izuru cannot be affected by his luck, providing a balance between the two as Izuru simultaneously posses the title of the Super High School Level Good Luck.

These characters have not canonly interacted too much since Izuru is an alter ego of Hajime Hinata. Despite Izuru being a reclusive individual, Nagito is one of the few characters Izuru has interacted with. They both attended Hope's Peak Academy in the same grade, with Izuru's former persona, Hajime, enrolling in the reserve course. Both Izuru and Nagito joined Ultimate Despair in order to get a better look at the battle between hope and despair. Both of them also helped out with Junko and Monaca's plots, respectively, for the very same reason, with Nagito heavily assisting Monaca with her plans by guiding Komaru Naegi to become a symbol of hope, and Izuru being the mastermind of the Killing School Trip.

When the two meet again (both as members of Ultimate Despair) they do not recognize each other. While Nagito is very excited about Izuru's company, he merely thinks of him as a completely boring person. This was due to the fact that Izuru asked Junko to erase all memories of him, as he would later erase his own memories about Class 77-B. Izuru immediately managed to understand Nagito's true nature from the first few seconds of speaking with him, and described him as 'boring'. Despite Izuru's harsh remarks, Nagito was still eager in making conversation with him.

In the end, after Hajime Hinata and Izuru's identities have mixed, at first Nagito assumes whom he was talking to was Izuru, but quickly corrects himself calling him Hajime Hinata once more.

The ship already began to sail during Danganronpa 2 era, with the reveal that Izuru Kamukura is an alter ego of Hajime Hinata who already was involved in a ship with Nagito. The fact that Izuru Kamukura has the talents of every Hope's Peak Academy's student ever and as a result is called the "Ultimate Hope" also helped, considering Nagito's obsession with hope. The scene from Despair Arc's episode 8 in which Izuru steals Nagito's gun and shoots him while Nagito is clearly under impression, all of which shown with more romantic colors, made the ship even more popular than ever, especially since it confimed Nagito's interest in him. Spike Chunsoft tweeted about this scene, commenting through Nagito's perspective on Izuru's touch. Overall, this can be seen as a prompt and inspiration for many shippers. 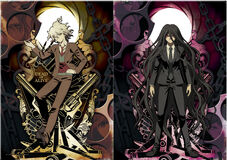 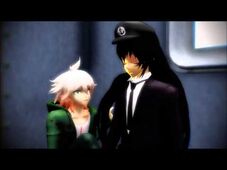