Kamumatsu is the het ship between Izuru Kamukura and Kaede Akamatsu from the Danganronpa fandom.

As they are both from different games in the series, they've never interacted in canon. However, they do share an event in Danganronpa V3's bonus mode, Ultimate Talent Development Plan.

In the event, Kaede was playing the piano, and Izuru was watching. After she was done playing, she noticed Izuru has been watching all this time. Izuru recognizes the song she was playing, being Chopin's Farewell Waltz. While Kaede wasn't suprised that he knew about the song itself, she wonders how he knew about Chopin, since not many people know about him.

After introducing themselves, Kaede asks Izuru if he likes music. Izuru then says that he know how to sing, play instruments, write lyrics and do music. Kaede, being amazed, also asks Izuru if he knows how to play the piano, which he says he can do it with ease. Kaede, being curious about Izuru potentially being better than her at piano, asks Izuru if he could play. Izuru didn't mind the request, so he started playing.

After Izuru was done playing, Kaede was stunned by his perfomance. Izuru then asks Kaede if she was dissatisfied or not. Kaede says she wasn't, however, she asks Izuru if he wants the audience to feel anything, in which he says not particularly, much to Kaede's suprise, since he was playing so well. Kaede asks Izuru about her perfomence, in which Izuru says it was near perfection and her talent would be clear to anyone.

Kaede didn't meant this kind of answer, and then states that it's hard for her to critize other people's perfomance. Kaede thinks that Izuru could do so much more and deliver any kind of emotion with his talent. Izuru thinks that the outcome would be predictable, in which Kaede disagrees. Kaede says to Izuru that she would like him to come hear her play again. There's a lot of things she wants to tell Izuru, but she wants to use the piano rather than words, and she also plays every day. Izuru considers it, since he has plenty of time.

Kaede – “...that was amazing. That was such a stunning performance.”
Izuru – “... Are you dissatisfied?”
Kaede – “No, nothing like that. Thanks for playing for me. Your technique was incredible... You played all the difficult parts like they were nothing.”
— UTDP

Kamumatsu is not very well known due to them never interacting in canon. However, it still has it's shippers thanks to their event in Ultimate Talent Development Plan. Izuru being a cold person and Kaede being optimistic and kind as a dynamic may have helped the ship. 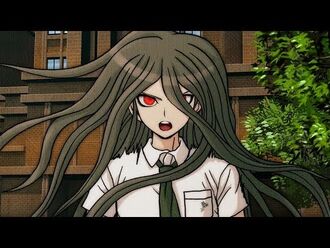