View source
watch 02:56
Doctor Strange in The Multiverse o Madness - The Loop
Do you like this video?
Play Sound
This article is about Izuru Kamukura, the alter ego of Hajime Hinata. You may be looking for the ship between Chiaki Nanami and Hajime Hinata.

Kamunami is the het ship between Chiaki Nanami and Izuru Kamukura from the Danganronpa fandom.

The two first meet in episode 8 of Danganronpa 3: The End Of Hope's Peak Academy, when Nagito Komaeda tries to shoot Junko Enoshima with a gun. Much to both Chiaki and Nagito's surprise, Izuru grabs the gun and shoots Nagito instead. While the two talk with each other, Chiaki recognizes Izuru as Hajime Hinata.

One of the most notable interactions between the two is in episode 10, Chiaki's real-world execution. After a long path of pain and suffering, Chiaki tells Izuru about her dreams of being classmates with everyone, and how she didn't want to die. Chiaki then gives into the pain while Izuru observes. Kamukura picks up Chiaki's hairclip, and cries over her demise. It's a noteworthy moment, as Izuru is otherwise stoic and shows no emotions, regardless of what's happening.

It's worth mentioning that it was Chiaki's hope, shown through her final moments, that proved to Izuru that hope can be as unpredictable as despair. This was what heavily influenced his philosophy and inspired him to orchestrate Killing School Trip, a final showdown between Junko's despair and Chiaki's hope that was meant to prove which one is more unpredictable to him.

In Hope Arc, Izuru, now merged with Hajime, holds Chiaki's hairpin, meaning he's kept it throughout the years ever since her execution. He then has a conversation with his illusion of Chiaki, though the conversation actually happens between her and Hajime's side of Izuru, as she explains to him how where her AI got her form from.

The two have two events together in Danganronpa V3's non-canon bonus mode - Ultimate Talent Development Plan; one of which they share with Usami. In their own event, they play a game together. Chiaki says she doesn't mind narrowly losing to Izuru, as she got to spent time with him. In their event with Usami, it's mentioned that Izuru now approaches Chiaki on her own (although that's to avoid being dragged by Usami). Chiaki also mentions having an improved win rate to Izuru, implying she actually managed to win some of their games. She also claims he's changed over the three years they spent together, specifically that he warmed up to her and the others.

The ship sailed as a result of Chiaki's kindness towards Izuru. Some fans of the ship started to like the pair in episode 8, but the show further fueled the ship by showing Chiaki trusted Izuru with her last words. A number of fans speculate Izuru's thoughts about Chiaki, seeing as he immediately started crying after her death.

Rival ships include Hinanami, Junkozuru, Kamukoma, and Nanamiki. Hinanami is the most particular one, not only because of its popularity, but also because it's a ship between Chiaki and Izuru's alter ego, Hajime. Since Hajime and Izuru are eventually merged together, some fans ship them both with Chiaki, creating alternate universes where she doesn't die to do so. 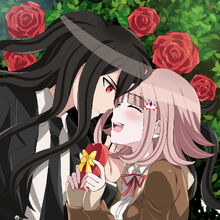 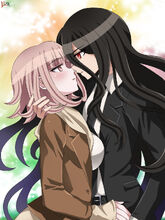 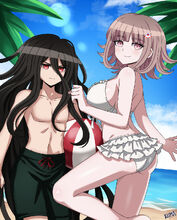