KanoYachi is the femslash ship between Kanoka Amanai and Hitoka Yachi from the Haikyu!! fandom.

Yachi and Kanoka have never interacted. They do have some similarities, though. As a child Kanoka was very timid, due to being made fun of because of her tall height. Although Yachi probably hasn't dealt with that, Yachi is also very timid. She's intimidated by others a lot and seems to underestimate her own importance and deems herself incapable. They also both get easily flustered. Kanoka is shy around her crush, Tanaka, and she often blushes and stutters. Yachi when seeing the volleyball team change into their uniforms blushes and covers her eyes.

They're also both more confident than they used to be. When Yachi first joined the volleyball team, she was extremely shy and hid behind Kiyoko, now she's more comfortable with them. Hinata also helped with her condifedence telling her she has a lot of good qualities. She also has become better at overcoming her timidness by voicing the fact that she is nervous, something she told Yamaguchi when he became nervous about facing Seijoh again. Kanoka when she was a child didn't have much condifedence because of the kids at school who would pick on her because of how tall she was but over time and with some help from Tanaka, she was able to gain more confidence in herself and in her abilities as a volleyball player.

Kanoka is childhood friends with Tanaka, and has feelings for him. Tanaka, however, does not feel the same way as he only loves Kiyoko. Yachi is great friends with Kiyoko as Kiyoko was the one who recruited Yachi to potentially be the next manager for the volleyball team. Kanoka's friendship with Tanaka and Yachi's friendship with Kiyoko are similar. Like how Tanaka protected Kanoka from her bullies, Kiyoko is protective of Yachi, that's shown when she protects Yachi from a stray ball that was about to hit her at the same time Shigeru Yahaba attempted to flirt with her and will at times defend her from rowdy boys from other schools.

Even though Kanoka and Yachi have never interacted in the anime/manga, we do see them in Haikyū-bu!! volume 3 in the cover. On the cover Kanoka is looking over at Yachi. In two photos of the stage play 'Fly High' cast, Kanoka and Yachi's actors are standing next to each other and Kiyoko in both photos.

KanoYachi is a a popular rarepair despite being overshadowed by KiyoYachi. Kanoka is shown to have a crush on Tanaka and Yachi can be read as having crush on Kiyoko (because of their very close friendship and Yachi's great admiration for Kiyoko). So when TanaKiyo got married in the manga, Kanoka and Yachi were left alone. This makes KanoYachi fit the "Pair the Spares" trope in a way. KanoYachi is normally shipped alongside TanaKiyo as well as other popular ships for its fandom. It's also rivaled by YamaYachi and HinaYachi, though femslash pairings are more popular for Yachi and Kanoka doesn't have many ships being a minor character.

KanoYachi is popular for people that want to pair Yachi with a girl besides Kiyoko. Though MiwaYachi has also gained attention for that reason. Although KanoYachi is more liked and popular than MiwaYachi currently. As for the popular ship, KiyoYachi, even though many people have no problem with KiyoYachi, other peple might not want pair Yachi and Kiyoko since Yachi is a first year and Kiyoko is a third year, giving them a two/three-year age gap. Some people perfer ships with a smaller age gap so they'll go to KanoYachi since Yachi is a first year and Kanoka is a second year.

KanoYachi has fairly a good amount of fan content. It has a decent amount of fan art, though not as much as other ships as they don't have any canon interactions with each other. Usually fan art of KanoYachi is fluffy and wholesome, some showing them going on a date or just hanging out with each other. Many of the artwork also shows Yachi being flustered. KanoYachi currently has 75+ works on AO3. The most used tag on KanoYachi works is fluff, probably because they both have nice personalities. The second most used tag is angst, though KanoYachi has notably less works with this tag. While KanoYachi is normally the main ship in KanoYachi works, KiyoYachi is also sometimes depicted, normally for Yachi to move on from Kiyoko to Kanoka. 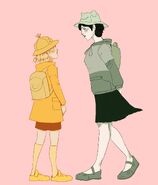 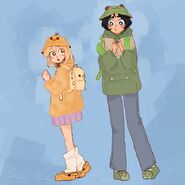 KanoMaiYachi refers to the ship between the two and Maiko Yonezawa