Karlity is the slash ship between Karl Jacobs and Quackity from the YouTube fandom.

Karl also met up with Sapnap in real life in August of 2021. Karl wore a shirt with Quackity's face that read "Quackity My Beloved <3". Many fans suspected if Quackity was with Sapnap and Karl, and even got it trending on Twitter. On stream, Karl continued to wear the "Quackity My Beloved <3" shirt and he and Sapnap even invited Quackity to join them. They showed a bed on camera that they claimed was for Quackity.

Karl got engaged to Sapnap, but the two later opened their relationship to Quackity. Karl and Sapnap started Kinoko Kingdom with GeorgeNotFound, though Karl forgot to tell Quackity about it, likely due to his memory loss. Quackity eventually found out from George, leaving him to feel abandoned by Karl and Sapnap. Quackity to drifted away from his fiancés and became estranged to the two. Karl and Sapnap, who were still happily together, didn't know that they forgot to tell Quackity about Kinoko Kingdom, leading them to think they still have a positive relationship with him.

Sapnap stumbles upon Las Nevadas and brings Quackity to Kinoko Kingdom to show him around. The two run into Karl. Karl and Sapnap continue to show Quackity around. Karl asks if Quackity wants to move in. Quackity reminds Karl that he was working on Las Nevadas after El Rapids' destruction. Sapnap and Quackity ask Karl if he remembers El Rapids.

Karl brings Sapnap upstairs and tells him that Quackity killed him. Sapnap and Quackity remind Karl that Karl agreed to the plan of dying. The conversation escalates to an argument. Karl says he doesn't know anything about Quackity except that he's the reason he died. The two continue to argue even while Sapnap tries to stop them.

After Quackity walks away from Karl, Sapnap tries to tell Quackity that Karl was probably joking or that something was wrong with him. Quackity says he appreciates Sapnap's efforts but that he doesn't care about Karl anymore. Quackity leaves, saying he never wants Karl around him again.

The popularity of the ship mostly came from their canonical engagement of the Dream SMP. Their engagement also includes Sapnap, which also increases the popularity of Karlnapity. Karlnap is the more popular ship between the trio and Karlity is rivaled by TNT Duo. There is plenty of art of the duo together, typically relating to the Dream SMP and its lore. Though, most of the fanart also includes Sapnap. They're not often shipped in real life since Quackity has said he's not comfortable with it and Karl has said he's straight. 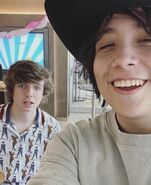