Katsuyu is the het ship between Katsuki Bakugou and Tsuyu Asui from the My Hero Academia fandom.

Due to Katsuki and Tsuyu's much stronger relations with Eijiro and Ochako (respectively), Katsuki and Tsuyu do not often interact. However, Tsuyu especially holds a number of commentary on Katsuki's brash actions, such as deeming the entirety of the class as 'intense' after viewing Katsuki's near-rabid performance during the Battle Trials. Additionally, after seeing Izuku and Katsuki's (verbal) battle after the trials, Tsuyu, who'd caught a glimpse (alongside Mina and Ochako) says that Katsuki "looked like he really wanted to punch" Izuku.

On the bus to the USJ, the students begin to discuss quirks and pro-hero potential. Eijiro says that Katsuki (and Shoto) are supremely powerful, and hero ready, in a general sense, but a fearless Tsuyu adds that he isn't likely to be a popular hero, at the least due to his rotten personality. When Katsuki jumps to fire back at her, she simply pays him no mind, outside of saying "You see?" while pointing a finger at him.

Albeit briefly, Katsuki and Tsuyu are shown entering the Sports Festival alongside each other. Later, after after the Cavalry Battle, Tsuyu congratulates Mina on her team (Team Katsuki) scoring so high up. Mina simply tells her it didn't truly feel like a win, as Katsuki took charge of the majority. After the match-up with Ochako, Tsuyu tells Katsuki that although it was an awkward match up, he did a great job of playing a villian. When Denki chimes in with something like "how could you beat that poor frail girl, I couldn't help but hold back" and Tsuyu sticks up for Bakugo by saying "you were beaten fair and square, Kaminari."

After the events of the Vanguard Action Squad's attack on the forest camp and the kidnapping of Katsuki, the class visits Izuku at the hospital. Eijiro begins to shout his concern over losing Katsuki, and his plan to save him. Tsuyu tells him, in short, that she feels his concern about losing him as well, but that the idea of a rescue mission is terrible. Despite his previous opinion, when Katsuki is saved, Tsuyu tearfully laments what he said about the rescue mission idea and regrets not supporting his companions in the rescue.

At the end of the Paranormal Liberation War Arc, Tsuyu ties up Katsuki with her tongue to get him to leave the hospital as Bakugo is yelling at/worried about Izuku. Tsuyu looks sad about having to do this while everyone else looks relieved.

Katsuyu gained traction thanks to Tsuyu's 'stony', eternally unbothered nature, which pays incredible contrast to Katsuki's everything. Fans enjoy seeing the way Tsuyu is supremely okay, to say the least, with the majority of Katsuki’s behavior , highlighted by her calling him "Baku-Chan" or "Lil' Baku" (depending on the translation). This seems to be quite an uncommon trait to have from character to character.

Additionally, it is most commonly shipped alongside IzuOcha, due to the connection between the girls, and the plentiful hope fans have that Izuku and Katsuki will restore their childhood bond. This ship more often than not sails as a BROTP, or friendship due to Katsuki's heavy lack of interest in girls, and Tsuyu's disinterest in guys. 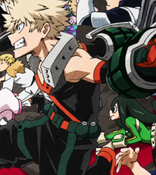 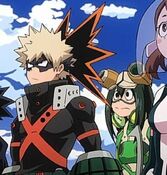 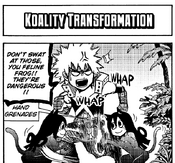 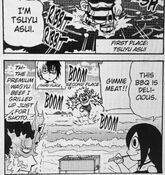 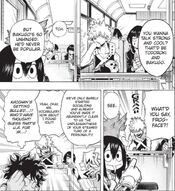 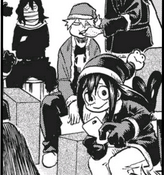 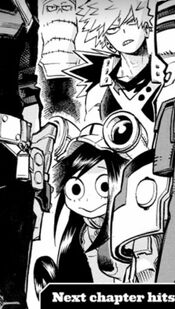 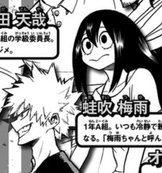 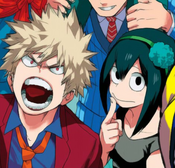 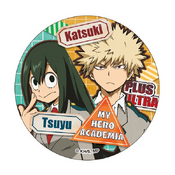 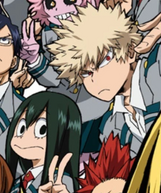 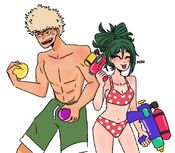 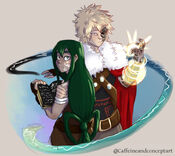 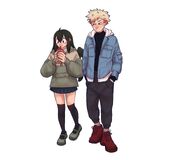 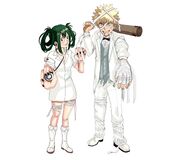 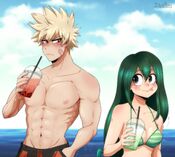 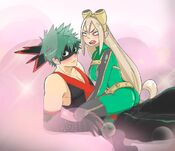