KazuScara is the slash ship between Kaedehara Kazuha and Scaramouche from the Genshin Impact fandom.

Kazuha and Scaramouche have not met in canon yet, but they both are vagrants from Inazuma. They don't have many other similarities. And since they're considered to be the opposites by their personalities.

In the recent Hues of the Violet Garden Event, a hidden truth about his family's past is revealed to Kazuha. His family had previously lost their business (a forging school of the famous Isshin Art of the Raiden Gokaden) and with it lost their status and properties. This was caused by someone called "Kunikuzushi" wanting to wipe out the Raiden Gokaden by manipulating them behind the scenes. Unbeknownst to Kazuha this Kunikuzushi is actually Scaramouche.

Kazuha's great-grandfather didn't want his descendants to seek revenge against Kunikuzishi and while Kazuha agrees to this sentiment, he also says that he won't turn a blind eye if Kunikuzushi is still plotting to stir up more trouble.

As of now Kazuha is unaware of Scaramouche's identity as Kunikuzushi. However this may soon change as Ayato implies to the Traveler that Kazuha, Ayaka and him likely have to face this common enemy together in the future.

Kazuscara originated from Kazuha leaks. Because Kazuha is from Inazuma, fans immediately speculated that he knew Scaramouche. They initially became popular due to being an aesthetically pleasing duo. They also were the first two male Inazuma characters to be leaked. Because there was no information on Kazuha's personality at the time, he was interpreted as having a gentle personality to contrast Scaramouche, which later turned out to be true.

The ship grew in popularity as more people discovered the theory that they were old friends. With Kazuha being described as a kind soul while Scaramouche is said to be difficult to get along with, they were shipped romantically by fans of the Opposites Attract trope. A lot of fanart portrayed Scaramouche being uncharacteristically caring towards Kazuha. There is also a good amount of platonic fanart.

Much fan content prior to Kazuha's release consisted of them wanting to reunite after being separated somehow. This included theories that Kazuha left Inazuma to search for Scaramouche. One theory that gained some traction was that the drifting bottles in Dragonspine were from Kazuha and Scaramouche to each other. The theory about the drifting bottles in dragonspine was later proved to be false, as an NPC in Inazuma talks about sending those letters to another person. Although this theory is false, fans still enjoy using this as a prompt or inspiration for fan content.

Kazuha's release essentially disproved all theories, as there is no mention of Scaramouche or anyone who could be him in Kazuha's stories and voicelines. Though it's possible they could have met in passing at some point, there is no substantial relationship to speak of. Despite this, KazuScara has remained a common ship. Fans still enjoy their potential together and create canon divergence scenarios in which Kazuha and Scaramouche meet.

After the Hues of the Violet Garden event, fans have found interest in the Enemies to Lovers trope. This stems from Scaramouche previously manipulating the Kaedehara family's Isshin Art which basically led to Kazuha's clan's downfall. While Scaramouche is unaware of Kazuha's existence, the latter swore he would not turn a blind eye to Scaramouche's plotting.

“My great-grandfather and the head of the Kamisato Clan escaped from death and learned that the forging diagram had been tampered with by Kunikuzushi.”
— Kazuha, after learning of Scaramouche's manipulations in Hues of Violet Garden

“Therefore, knowing the truth behind what happened is enough for me. I will live on just as my great-grandfather had hoped. That being said, if the enemy from all those years ago is still lurking and plotting to stir up more trouble, then I definitely won't turn a blind eye.”
— Kazuha in Hues of Violet Garden 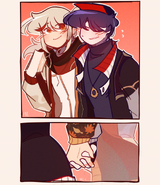