Kazumiya is the het ship between Kaedehara Kazuha and Naganohara Yoimiya from the Genshin Impact fandom.

They have minimal interaction in the canon timeline, although they are coming from the same nation (Inazuma). Their interaction would come on their voice lines about each other. Where Kazuha remarked that he helped Yoimiya bring the fireworks that she made to Liyue, stating that some were heavy for him to unload. Yoimiya, on the other hand, has a mixed opinion about him. She knew about Kazuha's poetry skill through the words: "While those with many cares often speak of ancient poetry or the scenery. They talk of flowers and birds, wind and moon", and yet noticing Kazuha's problem with a detachment from reality. But then, she still looking forward to hearing his tale.

The two of them have contrasting personalities. Kazuha tends to keeps it all to himself at first but began to slowly open up as Kazuha gains trust in people around them. Kazuha came from a clan which illustrious and prosper, until the inevitable moment where the clan would collapse by the time Kazuha was old enough to inherit the fortune. Yoimiya is fairly outgoing and very chatty on the get-go when the traveler first meets her, came from Nagonohara family which is famous to create fireworks festival in Inazuma and got her own nickname of "Queen of the Summer Festival".

Their similarity comes from their view on Inazuma. Both of them opposed the Raiden Shogun's view about the Inazuma situation, especially on Vision Hunt Decree and Sakoku Decree. Yoimiya tries her best to give happiness to the people of Inazuma by showcasing her fireworks throughout the festival. Even though fireworks are fleeting, their blaze and warmth live in people's hearts forever. Both a moment and eternity, these fleeting marvels are an expression of "protection" she gives to those around her. While Kazuha never spoke about this vocally, he shows through action that Inazuma deserves a better way of eternity through his action, including joining Watatsumi Army to abolish Vision Hunt Decree for good.

Both have their fair share of experience with the officials of Inazuma. Kazuha was trying his best to make Inazuma peaceful again with no other means but war. And it shows on Archon Quest, Stillness, the Sublimation of Shadow: In the Name of the Resistance, following the path of Watatsumi Army along with Kokomi and Gorou, to make Raiden Shogun realize that there's another view about eternity than locking Inazuma out from other nation. Yoimiya, on the other hand, helps an outlaw of Inazuma on the Archon Quest The Immovable God and the Eternal Euthymia: A Flower Blooms In Prison, where she helped Master Masakatsu escape from jail under Kujou Sara's nose. And on her personal quest Carassius Auratus Chapter, Act I: Dreamlike Timelessness, she helped Sakujirou, whose an illegal immigrant right after Sakoku Decree took effect, having to take refuge in Naganohara Fireworks until it is safe for him to leave.

“The last time she commissioned Captain Beidou to ship fireworks to Liyue, I unloaded the shipment myself. They were so heavy! I doubt that anyone besides her could make such huge fireworks”
— Kazuha about Yoimiya.

“People with no worries like myself speak plainly, while those with many cares often speak of ancient poetry or the scenery. They talk of flowers and birds, wind and moon, but never about the reality that confronts them. He's got quite the tale to tell, I'm sure.”
— Yoimiya about Kazuha.

“I like frank people, because we can freely speak our minds to one another. There is no need to hide anything that you wish to say. I hear the voices of all things in nature, and that includes yours.”
— Kazuha about frank speech.

Kazumiya was born when Genshin Impact did a drip marketing of Yoimiya's appearance.

Kazumiya shippers often think that both Kazuha and Yoimiya's dynamic personalities can compliment each other, creating a fun interaction and many thematic similarities. With Kazuha often looking as the introvert one, Yoimiya tends to be more the extrovert one. When gaining trust from Kazuha, it has to be through certain experiences or lengthy processes that could make or break your trust in Kazuha's eyes. A process, that Yoimiya could see as a challenge and an interesting one since Yoimiya's outgoing personality could make an interesting conversation for how Kazuha would navigate himself when within her sight.

Both are artists in their own way. While Kazuha excels in poetry and music, as shown in Tuned to the World's Sounds game event, Yoimiya excels in her fireworks craft. As a pyrotechnician, she can create fireworks in such a unique way, it turns to head up until the Raiden Shogun's herself.

Both also have their own ways of believing in freedom. Kazuha shows this by wandering the different nations, specifically the seven seas with Beidou and her crew. While one way Yoimiya expresses hers is through her fireworks, as she believes they make her life very interesting. She is also a fast speaker, and can always speak directly about her mind say, but is able to strike a balance between listening and speaking in such conversations.

Kazumiya is a rarepair within the Genshin Impact fandom and is often overshadowed by TomoKazu and KazuScara from Kazuha's side and Ayamiya from Yoimiya's side. On AO3, there are currently over 50 works about Kazuha and Yoimiya. 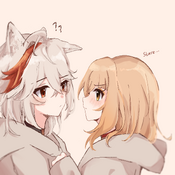 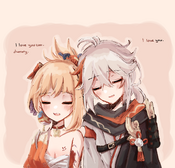 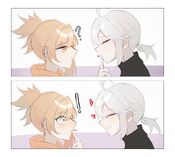