Kazuyaka is the het ship between Kamisato Ayaka and Kaedehara Kazuha from the Genshin Impact fandom.

Kamisato Ayaka and Kaedehara Kazuha, along with the Traveler, Paimon, Albedo, and Venti, discussed matters together during the Irodori Festival. Kazuha stated that “Miss Kamisato” was thinking the same thing as himself. They were also both models for one of the Five Kasen during the festival, with Ayaka being Sumizome, who investigated the poem in which Akahito was found to have committed plagiarism, and discovered that Akahito was found guilty for a crime he did not commit. The Kaedehara Clan was connected to the Yashiro Commission (Kamisato Clan) since they were the masters of the Isshin Art. Kazuha’s great grandfather was with people from the Kamisato Clan to track down the person who damaged the plan for making the sword. They found Kunikuzushi, and both clans suffered from the incident with Kunikuzushi.

Thoma has mentioned Kazuha as the Traveler arrives in Inazuma. Kazuha helped the resistance, while Ayaka secretly planned against the Shogun throughout the Inazuma chapter with the Traveler. While there currently are not much canon interactions of Kazuha and Ayaka in the game, they share quite a lot of similarities. Kazuha helped the resistance, even being the one to block an attack made by the Shogun, and Ayaka secretly helped the Traveler withstand the Shogun, and they come from the same nation (Inazuma). Kazuha and Ayaka also both have the same animation of sheathing their sword.

Ayaka and Kazuha are both five star sword users, and work extremely well together. Cryo and Anemo also cause a strong elemental reaction known as “Swirl”. Both characters are known to be some of the most powerful characters in the game. Ayaka has an alternative sprint, which helps travel around and makes ice-bridging more convenient, and Kazuha can boost you up in the air and reduce 20% stamina consumption while sprinting. It is notable that both are helpful for traveling, which makes them good to be on your traveling team.

Both of them have lost people close to them, with Ayaka’s being her parents, and Kazuha’s as his friend. Both have been inspired by their lost close ones, and share their qualities. In the Inazuma Archon Quest, Ayaka asks the Traveler to help some people who have lost their visions, and one of them ends in the victim of the Vision Hunt Decree deciding to pass on his ambitions to his disciples, which is very similar to how Kazuha shared his friend’s ambition.

In Ayaka’s “Favorite Food” line, she expresses that she want to try oversea foods more often, and Kazuha, being a ronin samurai who travels with Beidou and the Crux Crew, probably picked up some recipes from places that aren’t from Inazuma, and hence would be able to grant Ayaka’s wish of trying oversea food. Ayaka also states that to witness the Musou no Hitotachi and still live is quite a feat. She also says that she has great affection for poetry and music, and Kazuha has a talent in making poetry, and he makes amazing music. Kazuha not only witnessed the Musou no Hitotachi, but also blocked it. Kazuha, on the other hand, Ayaka in one of his voice-overs, saying that everyone living in Inazuma must have heard of her, and she is as perfect as a person could be, and wonders what she thinks of the state of Inazuma.

In the official animation, both Ayaka and Kazuha are seen. A maple leaf, which appears in many of Kazuha’s attacks, and also his character design, fell into Ayaka’s tea cup. Kazuha was seen sparring with Aether. In Ayaka’s official trailer, she talks about the art of sword and asked Thoma to spar with her.

“To witness the Musou no Hitotachi and live to tell the tale is quite a remarkable feat. Even though I recognize her as our true deity with the power to change Inazuma's fate at will, if there is conflict between the two of you, then... I shall choose to side with you.”
— Kamisato Ayaka, about the Raiden Shogun, standpoint.

“I'm fascinated by food from overseas. Though I don't get to try it very often... So, if I had to choose something from Inazuma, then probably... Chazuke. But not when anybody else is watching... So I tell you that in confidence.”
— Kamisato Ayaka, favorite food.

“I have great affection for the arts: music, song, poetry, shougi, and dancing. And you?”
— Kamisato Ayaka, hobbies.

“I'm sure everyone living in Inazuma has heard of the "Shirasagi Himegimi." The lady of the Kamisato Clan is as perfect as a person can be, though our paths have seldom crossed. I wonder what she thinks of the state of Inazuma today?”
— Kaedehara Kazuha, about Kamisato Ayaka.

Kazuyaka used to be considered a rare pair, however after their interaction during the Iridori Festival, the ship has gained some popularity. Many fanart and fanfics have been found in various places online. While they only ever interacted during the Irodori Festival, Kazuha and Ayaka have similar, peaceful personalities and are similar in game. Kazuyaka is constantly overshadowed by the more popular ships, Thomaya and BeiKazu. They currently less than 50 fanfics on AO3. 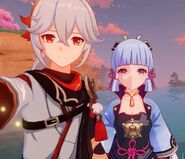